Phil McDermott: Getting past the words

The Draft Auckland Plan is a daunting document – both in ambition and in presentation.  It covers a range of fields.  In what started out as a spatial planning exercise, Auckland Council boldly sets thirty year priorities for central government in areas like transport, health, and education; spells out what industry might do and how it might perform;  and promulgates its own long-term agenda in the areas of land use, urban design, and infrastructure.

So when we get past the vision, the photos, the charts, the the strategies, the principles, and directives, what does it all boil down to?
A central city manifesto
Well, in areas in which the council has direct accountability, it emerges to all intents and purposes as a central city manifesto.  A cynic might call it a bold attempt to boost inner city land values, potentially at the cost of ordinary, suburban ratepayers who will be called on to help fund its many CBD projects.
To try to pin down what the Plan really stands for, I examined the spending priorities.  Now we know these are indicative in most places, perhaps fanciful in some, but this is the best sign we have of where the Council’s priorities for us, and our children, lie.
And when we look at where the priority area spend is targeted, it is clearly anchored to the CBD:
Priority Locations for Capital Expenditure: Draft Auckland Plan 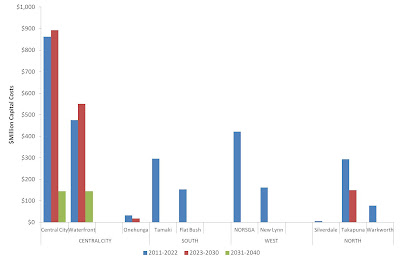 Source: Table 12.3 Draft Auckland Plan
Of course, the further into the future we go, the more tentative this spending becomes.
So let’s just take the first decade, 2011-2022: during this period 48% of the Council’s priority spending is targeted at the central city and water front.
Is it justified?
The area attracting the lion's share of spending, the area the Plan defines as the central city, [1] accounted for under 2% of the region’s population in 2009, although it did pick up 6% of growth in large part as a result of the boost in rental apartments in the middle of the decade.  It also accounted for 14% of Auckland’s employment and 11% of employment growth.
Turn these figures on their head: the rest of Auckland attracted 89% of population growth and 86% of job growth in the decade, but is lined up for only 52% of priority spending – much of that already committed by existing plans.  And this share falls to just a third if we add in all the figures through to 2040.
While funding for the Council’s Southern Initiative is not pinned down in the Draft Plan and might adjust the balance slightly, that initiative focuses on strengthening children and families.  It depends largely on working with the relevant community and government agencies to meet social goals.  The Auckland Council is likely to act mainly as a civic champion for a needy community in the vacuum left by the demise of Manukau City Council.  It’s not clear what, if any, commitment to direct investment it might make in this space.
And there’s more
On the other side of the ledger, the priority projects listed do not include the $2.7bn investment planned for rail and transport improvements (which are listed instead under city-wide infrastructure improvements in Table 12.2).  These are an intrinsic part of the grand plan to revive the central city.
Certainly these two projects are not yet funded, and may never justify funding in terms of demand, economics, or urban design.  But the fact remains that when we add them in to the mix the Draft Plan identifies close to $6bn planned by the Council for spending on the CBD over the next thirty years.  And that’s before we take account of such fundamentals as stormwater management, water supply, and wastewater infrastructure.
It is not clear how much retrofitting will be required for these and other underground services. The recently reported  requirement for a $4.5bn spend to fix ageing stormwater infrastructure over 50 years (which is not obvious in the Plan, and does not include new capacity) represents the sort of bill that redevelopment of existing built-up areas incurs, especially in older, central areas.
How will it work?
Regardless of how we qualify the Draft Auckland Plan's numbers the bias in the vision is overwhelming.  And it is difficult to see this emphasis making Auckland a better place to live for the majority of its residents.
The CBD is certainly improving as a place to visit as a result of investment that has gone into the waterfront, Aotea Square, and iconic events such as the Americas Cup regattas and the World Rugby Cup.  There is no doubt justification for more investment to make it even better. But there is a limit, especially if it comes at the cost of civic spending on more worthy projects that can be enjoyed by more people on a day-to-day basis, or if it unduly increases the community's exposure to high rates and charges.
The CBD pre-eminence bestowed by the Plan shows limited appreciation of where most Aucklanders live, work, and play, and what might be required to make our suburbs more attractive.
A high risk vision?
A key driver of the Plan's great CBD expectations is anticipation of an unprecedented population boost.  Chapter 8 of the Draft suggests that between 2006 and 2040 the population in the central city could increase by 340%, from 23,000 to 78,000.  This lies between 14% and 18% of projected region-wide growth, quite a turn-around.
It also raises some interesting issues.
For a start, there are no strong grounds to expect Aucklanders to embrace the increase in housing densities that would result, from around 20 to over 70 households per hectare (more or less, depending on average household size), especially given the environmental and social issues such a strategy raises in an intensively developed area of mixed use.
Second, there are real question marks over the capacity to deliver at a reasonable cost the 25,000 to 30,000 new dwellings implied in an environment where land assembly and remediation costs are high; infrastructure is constrained, ageing, and expensive; planning and consenting are traditionally tortuous; where dependence on medium density housing will push up construction costs; and where there is also an expectation for a revival in employment numbers.
Third, it raises real questions over the resulting conflicts between the requirements of residents – for space, security, and residential ambience – and visitors.  The latter comprise a large student population, office, hospitality, and service workers, and visitors to recreational and cultural facilities, all of whom make quite different demands on the built environment.  And this is an area where there were already 86,000 employees in 2009 (although that was down 4% on 2007).

Fourth, it concentrates even more people and activity in a part of Auckland that is most vulnerable to the impacts of natural hazards, with a concentration of ageing commercial buildings at risk from earthquake activity, a significant area of reclaimed land prone to liquefaction, and low lying areas, including key arterial routes and lifelines, subject to storm surge flooding or even tsunami-based inundation.  While the probability of these events is low, the relative impact of any one of them will be high in the central city.

How far, then, are the risks factored into the Draft Plan prescription: the risks of market resistance, commercial failure, economic inefficiency, land use conflict, and the impact of extreme events?
At least it’s a draft
In trying to create a CBD that might be all things to all people the Draft Plan may fall between stools.  Visionary planning certainly calls for imagination, but imagination tempered by clarity of means and ends, and a little more than a small dash of realism.
The CBD can be a great place, but that need not be at the expense of heartland Auckland.  And if we do not maintain the attraction of our suburban spaces, and make it easy for people to meet their work and lifestyle aspirations we may not get the growth required to support plans for the city as a whole, let alone to support the resources this council plans to pour into the CBD.
The Draft Plan is a useful snapshot of what the politicians and advisors want – now it’s time to take seriously what the people are likely to prefer, and what they might be able to afford, and shape our civic spending plans accordingly.
Phil is a consultant in urban, economic and community development. He blogs at Cities Matter.
[1] Auckland Central, East and West, Freeman’s Bay and Newton Census Area Units.  The latter two are traditionally excluded from definition of the CBD, but are included to bring the 2006 population estimate up to the Plan figure of 23,000 people.