Phil McDermott: Out Might Just be Better than Up - the Housing Density Debate is Not Over

The fall-back position - let's not be LA

New Minister of Housing Dr Nick Smith is determined to “smash the city limits”, so that Auckland grows out, as well as up.  The Mayor of Auckland responded with the claim that allowing the city to expand outward is tantamount to advocating a “flawed Los Angeles model of suburban sprawl and unbridled land availability", and that it would be a throwback to the 1940s and 1950s.
That rather simplifies an argument that has to be had.

For a start, the comparison with Los Angeles is misleading.  Greater Los Angeles has close to 13million people in an area of 4,230 sq.km.  Auckland has 1.4m in 560sqkm.  Los Angeles occupies a broad basin with generally benign topography. Auckland occupies a fragmented isthmus with significant physical constraints.  Los Angeles is reportedly the highest density urban area in the US at 2,730 people per square kilometre, and it works well because it has multiple city centres.

The Mayor suggests that we look to Melbourne, Hong Kong, and London as exemplars.  These are hardly helpful, either.  Melbourne with more than 4m people is by no means a compact city.  With 2,660 people/sq.km it has a lower residential density than Los Angeles or Auckland (2,700/sq.km).

And it’s apparently the 15th most expensive city in the world to live in – compare this with Auckland’s 56th ranking.

Hong Kong – now there’s an urban design success story, the 9th most expensive city in the world.  Seven million people living in 1,104sqkm, that’s 6,480/sq.km.  Maybe we could emulate that.

But it would sure cut down on migration, and that would ease our growth pressures.Hong Kong is crowded, congested, polluted.  There is limited accessible green space.  It might work for the small group of elite and wealthy who dwell above it all on Victoria Peak, but the lifestyle of the majority is not one that most New Zealanders would aspire to.

The majority of Londoners live out their lives in urban villages – The City has been settled in one form or another for 2000 years. It occupies a gentle rolling down land which has enabled it to extend outward in all directions.

Interestingly, despite high residential densities and high charges aimed at reducing it, congestion today is a critical problem.  Look at this from a recent report by the Transport Committee for Greater London:

20 per cent of the UK’s congestion is concentrated on just five per cent of the road network in London. These economically and strategically important areas will continue to face pressure as billions of pounds in regeneration funds are concentrated on areas where the opportunity to add new infrastructure is severely limited. According to the Mayor’s Transport Strategy, congestion could rise by as much as 14 per cent, even with the Strategy’s proposals implemented in full.

Does that hold out any prospect that by pursuing London-like densities will make Auckland a better place to live?

So does what we say line up with what we do?

The Mayor said that Aucklanders have already agreed on the city's "compact footprint", presumably relying on responses to surveys conducted in the shadow of heavy council promotion of the idea that improved amenity and easier traffic will result from consolidation.  But that’s simply an abstract response to an unproven vision.

The theory is different from the practice.  The apartment alternative – which tends to be what people think about when confronted with the idea of higher residential density -- doesn’t hold a lot of appeal.  More to the point - it doesn’t reflect the choices people are making.

Look at the graph below: detached housing is still preferred by the great majority of participants in the market for new homes in Auckland.  Not many appear to want to live in the housing conditions more commonly associated with Hong Kong or London. 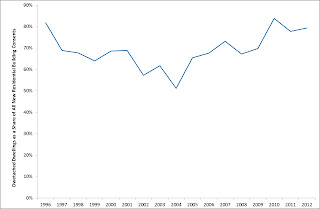 The Minister and the Mayor are clearly going to engage on this matter.

Here are some ideas that may help the discussion.

2  Don’t uncritically lean on potentially flawed studies from overseas (and that includes Australia) to support policies that risk imposing large costs on the community and reducing the quality of Auckland as a place to live.

3  Instead, focus on Auckland, its distinctive and constrained physical geography and its distinctive and expansive culture, and be prepared to apply some rigorous and relevant analysis to unitary plan objectives and policies for accommodating its growth.

4  Consider that perhaps the claimed cost differences between greenfield growth and redevelopment are illusory.  For starters, take fully into account the price of retrofitting ageing and under-capacity infrastructure to achieve the latter.  Think about how – and how much it will cost -- to cope with the congestion that comes with intensification.  The visible and invisible spending associated with supporting higher densities can lead to very expensive step changes in public capital expenditure and ongoing costs (think Auckland’s proposed underground central rail loop).  These and their fiscal impacts need to be honestly costed into your equations.

5  Think about the benefits of the alternative to going up. What do people want? Any apparent economic advantage favouring inner city living may be a lot less than the price people are prepared to pay to purchase a house in a suburban locality.

6  In any case, analysis generally reveals that any savings that might arise from increasing housing density follow a U-shaped curve.  After a preliminary fall, unit costs begin to rise again with increasing densities (at precisely what point depends on where you start from).  Given Auckland’s geography diseconomies are likely to set in quickly as density increases.

7  Recognise the opportunities to put into place highly efficient urban design that responds to local conditions and incorporates modern infrastructure in well-connected greenfield and satellites sites that retain Auckland’s and Aucklanders’ access to country and coast.

8  Look seriously into the long-term health effects of exposing many more people to high doses of air pollution in inner city housing.  And try to resist the idea that open space in urban areas (including golf courses) is just housing land in waiting.  In its green and accessible state it makes a major contribution to the well-being of city residents.

9  Consider the prospects for environmental and economic savings by increasing suburban employment centres (and encouraging public transport to serve them). It makes economic sense to have employment opportunities close to where people live rather than require mass commuting to a few central nodes.

10  There are social equity issues here, too.  We could have our own Victoria Peak (we probably already do it’s just not as visible as in Hong Kong).  We can make our policies and plans for the young and restless, the dispossessed, and the transient – the people who will occupy those apartments that lack water views and designer kitchens -- and retreat back to the leafy suburbs, hoping that we are not left with imitations of London’s depressed housing estates and or Scotland’s tenement slums in twenty years’ time.  Now that would really be taking us back to the 1950s and 1960s.

11  And here’s a sneaky one: think about how many councillors and their compact city advisers live in detached homes in the suburbs or on the city edge, or enjoy the owning a second home outside the urban area. Why might that be?

We need a solution that works for Auckland and Aucklanders, old and new

Certainly look up a little.  That will work for some of us.  But don’t forget to look out for the majority.

Auckland is already eminently liveable.  That’s why so many people live here – including many migrants from the sorts of places the Council would apparently have us imitate.  Let’s not bury what we already have by gazing up if out is a better fit.


Phil is a consultant in urban, economic and community development. He blogs at Cities Matter.

can we accept that ZERO WASTE toilets are a $5000 reality? They cost little to run, electrically or gas, and can fit into an upper level on many smaller houses, giving a view, air, and that second bathroom facility without invoking the dreaded Infrastructure word. ENCOURAGING people to remodel their little urban biddy into a nicer, slightly upmarket property prospect with THE AID OF THE MANY GREEN ARCHITECTURAL ADVISORS that are proliferating, We get better city density, with newer styling of existing places, and water management systems means irrigation for gardens without impact on the existing resources. DO it. Stop dithering, Kiwis...

I find N. Smith and the Nats very hypocritical. One of their 2008 policy promises was to get rid of zoning laws which would have solved many of these problems, as well as making sections less costly. Like most of their promises including tax cuts for all to get our economy going, nothing changed from the Labour party.
Mike.

We need a solution that works for Auckland and Aucklanders, old and new
.....
Hang on you sneeked something in there: new. We don't owe new residents the right to come and live in Auckland, this simply represents the whim of government since changing immigration policy in the 1990's. The Savings Working Group have pointed out that this was a bad decision but they have been ignored (less the people find out).