Tomorrow David Cunliffe will bombard us with statistics about growing inequality. That can be measured in various ways - household income, individual income or wealth.

The best source of data is the Household Income Survey. Just to provide an alternate view, I've pulled out some of the graphs that show a rosier picture than the one Cunliffe is going to paint. 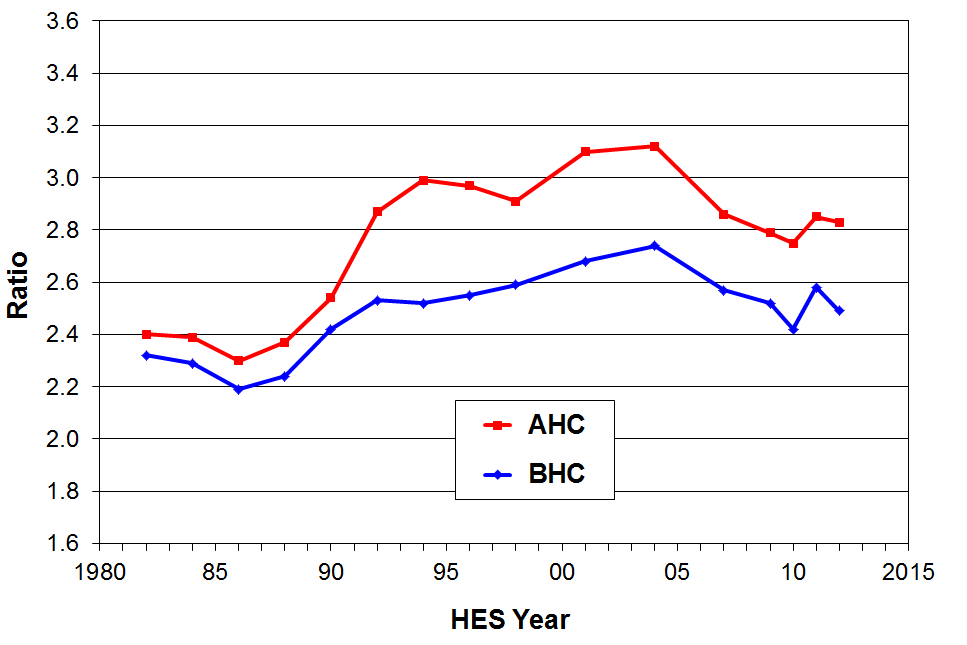 Going on to look at individual incomes here's the gini coefficient for NZ over the same period. 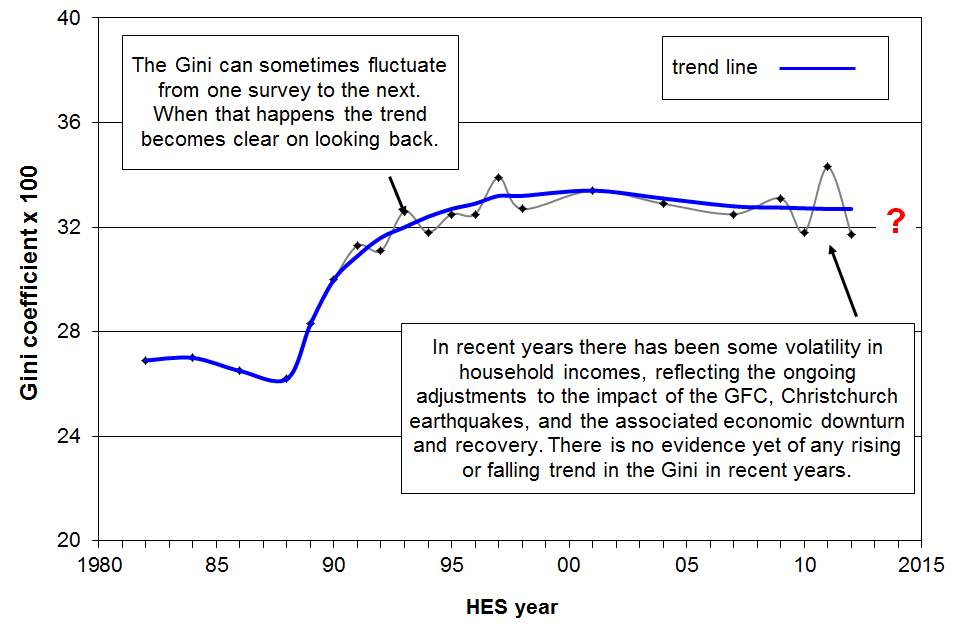 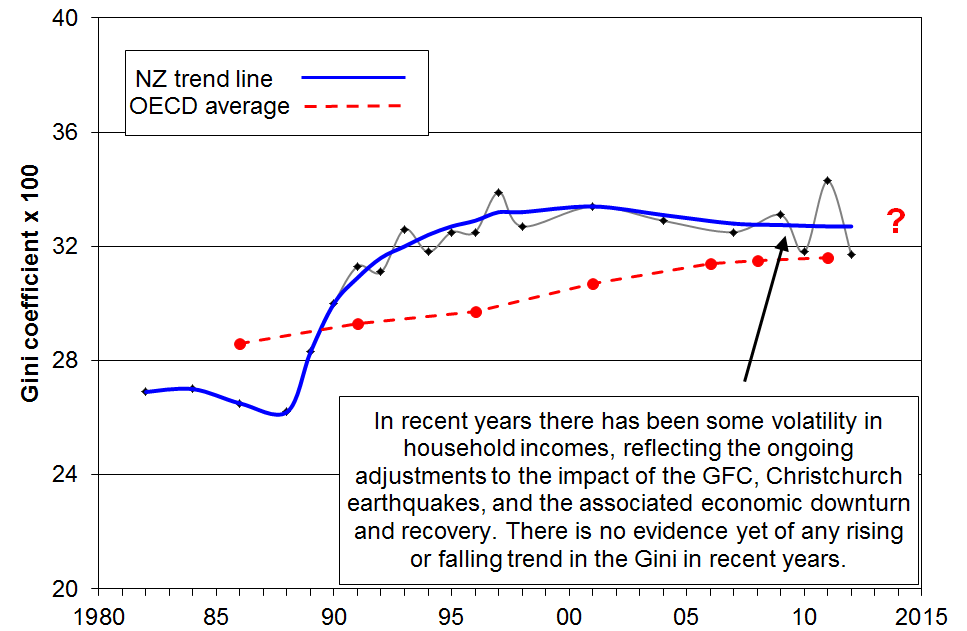 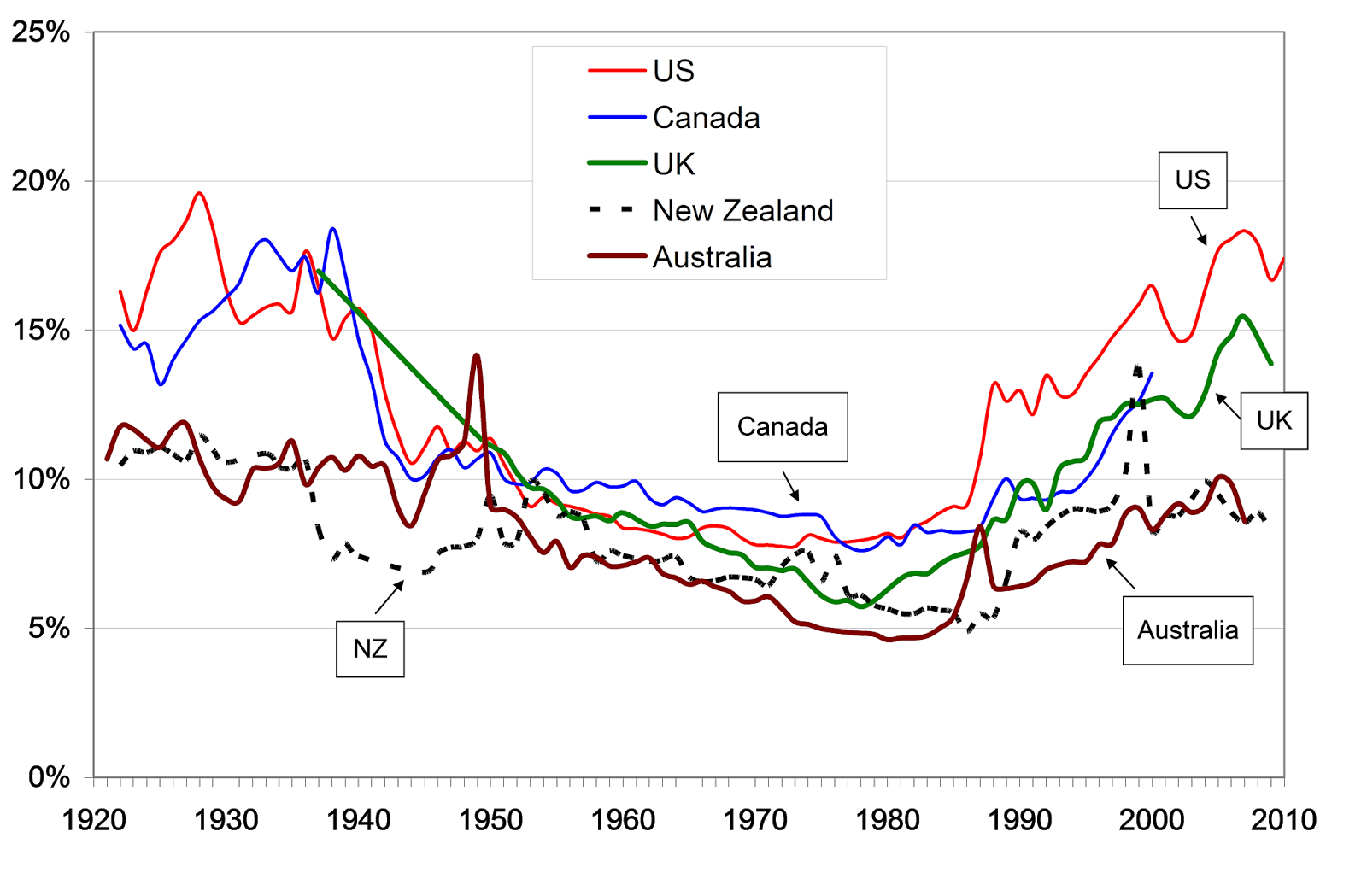 Back to NZ. Child poverty and population poverty rates have declined since 2001 by every measure.

Overall, if it is possible to generalise such a complex period of change with many factors contributing to income and wealth, a few stand out for me.

The one I rail against so much is the enormous growth of one parent families since the sixties. They are the poorest families and NZ has many of them.

Since the mid nineties real household incomes have grown across all percentiles but faster for those in the higher range. And they have grown faster than wages and salaries. The reason is many more parents - especially partnered parents whose labour force participation rates are higher - work today. But relationship breakdowns make parents poor.

Compared to the sixties - when inequality was lower - reliance on benefits is much, much higher. It was just a given that the welfare state would eventually drive up inequality. The least able would become more so as the disincentive to choose education, work and marriage grew. Yes, the large increase in inequality through the 80s and early nineties was mainly driven by a recession worse than the one just experienced. But even when employment improved dramatically during the 2000s, workless families with dependent children remained so.

That's the problem that needs solving. Getting society to structure itself in ways that are most conducive to building incomes and wealth. Strong families.

I suspect that whatever Cunliffe comes up with won't do the job.

Strong families? Yep I agree but it'll never happen under this current government. Well, for the top .000005% only. The upper-level greed has to end because apart from the fact that it's immoral, it's fracturing our society so badly I'm not sure it can be mended so that we can have your "strong families". So very many ordinary Kiwis feel ignored, exploited and as if they have been "left out" of any of the ordinary benefits of what used to be considered a normal Kiwi lifestyle. :(

But that's the very problem-he doesn't have to come up with anything that could be considered a 'solution' merely state the problem-right or wrong doesn't really matter, many will believe him and then state a solution that will make the envious see a solution-in his terms. He will want to increase taxes-mainly on the 'rich' even though statistically there is proof that doing so doesn't necessarily produce more income for the government. He will seek appeal in all of the class envy and income envy ways that he can.

Lee Bee, you need to understand that the wealthy do not have any negative economic impact on the less wealthy in a free market. "Upper-level greed" tells us nothing about the situation we observe and simply reflects your own attempts to reduce wealth inequality to a negative connotation through an empty platitude. If you feel that this is incorrect then please elaborate on your theory of "greed" and how it would be defined, or even measured. In addition you conveniently ignore the factors that contribute to capital accumulation through voluntary exchanges.

As Lindsay points out in her articles on this topic it is more important to encourage conditions that allow everyone's standard of living to increase rather than creating disincentives (and wealth consumption) by government redistribution. The welfare state creates disincentives to work and encourages mendicancy. The immorality of the current situation is the fact that special interest groups obtain private property transfers through political means rather than voluntary means. Again it would be interesting to hear your theory of morality and how it permits coercion and confiscation.

As Jigsaw mentioned it seems that inequality incites envy and it is this emotion that politicians such as Cunliffe appeal to and then offer a "solution". Unfortunately it is unlikely that there will ever be a cure for this unattractive human emotion. The best we can do is work on a society that limits its damage to others.

What I don't understand is why there is such a huge outcry against wealthy people - say the 1% group. Norman Gemmell wrote an article in the NZ Herald March 8, 2013 showing that 2% of the tax payers pays 34% of income tax. Top 14% of tax payers pay 96% of the income tax after all the tax credits and benefits were taken in consideration.

Lee Bee, I would be considered a target in your sights of a greedy person and for 35 years have respectably employed thousands of your fractured society. Despite the care and attention I personally give them most (not all)are overcome by their strong culture and family commitments that continually leads to a family in tragedy. Money is not the problem but education in the basics of NZ society is the best way out.

There is much talk of greed. Greed can be defined as an adjective describing the perceived degree of avarice shown by somebody earning more than he who observes the perception.
An appropriate adjective to describe the attitude of that observer is "envious" - often further described as being green with envy.

Piet you are absolutely right, but do think Cunliffe would actually admit such a thing. The wealthy don't get working for families, they don't get benefits, handouts & topups on their benefits, but it is the taxes that they pay that allow people who are less fortunate to take advantage of the billions that are handed out every year. You will never get rid of the green eyed monster that is hugely prevalent amongst so many NZers because as far as they are concerned it is their god given right to sit on their sorry asses, breed as much as they like because why wouldn't you, Cunliffe will give them another 60 bucks a week to breed more unwanted kids that the state will look after anyway because their only obligation is to spit them out, the more kids you have, the more the government will give them & in doing so will keep them in a constant state of dumbness thinking that all their problems will be solved with another $60 a week cause clever David Cunliffe told them so,he is no more than a poor deluded half assed commie.