In today's Herald on Sunday Matt McCarten refers to

At the end of September 2013 there were 126,470 people receiving Jobseeker Support

McCarten is quoting Mike Treen, Unite union director leader, who produced the graph below to make a claim that the unemployed are being denied benefits. 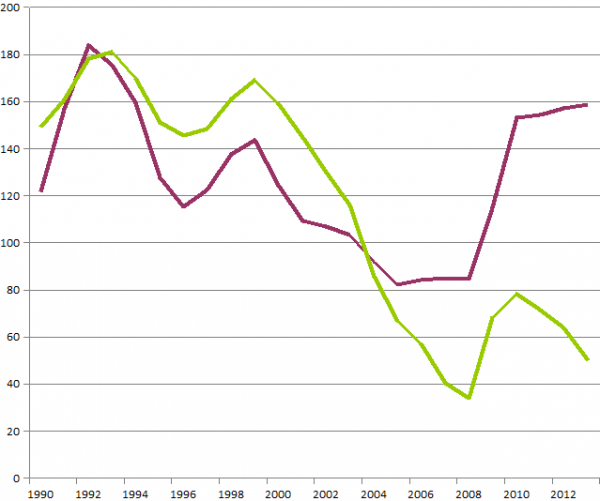 The purple line represents the number unemployed; the green line the number of people on the unemployment benefit.

But what does it look like if I add the line representing people receiving a sickness or invalid benefit? 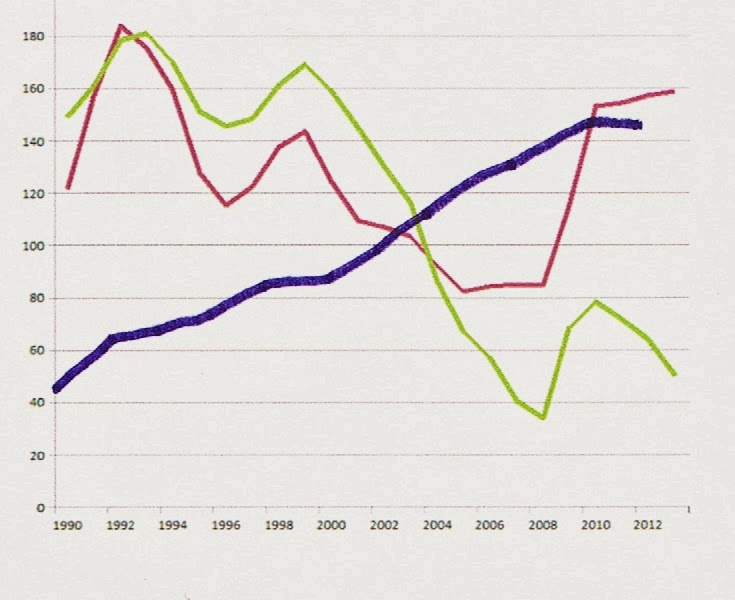 There it is. The blueish line. (Apologies for the crude scan and manually added line but I don't want to spend any more time trying to make this point than I have to.)

The sickness and invalid benefits have increasingly become de facto unemployment benefits. The OECD refers to this phenomena as "medicalisation" of labour market problems. Being long-term unemployed can and does make people ill. It's a problem all developed countries are grappling with.

There was also no significant increase in other working age benefits like sickness, invalid or sole parent benefits to account for the missing number of those receiving the unemployment benefit.

I'll leave you to draw your own conclusions as to why he would say that.

Getting back to the last three years, National's welfare reforms increasingly applied work-testing to the DPB and Sickness benefits starting with Future Focus which kicked in in September 2010. That means people who hadn't previously described themselves as unemployed for the purposes of the Household Labour Force Survey (the source of unemployment statistics) began to. This artificially boosts the number unemployed but is also beginning the very necessary correction to a true relationship between unemployment and welfare dependency.

Matt McCarten is dog-whistling. Most unemployed people - at least 85% - are still receiving state assistance. There are valid (though possibly unfair) reasons why some are not which I cover here.

Finally, note the irony of McCarten objecting to "Labour's dishonourable record" in this matter.

On another day you can fully expect to find him applauding Labour's wonderful achievement of record low unemployment.

Thanks for trying to rebut my graph. I have redone it for the combined benefit numbers (Unemployed, sickness and invalid together). It shows a somewhat less dramatic but still dramatic gap opening up between numbers on benefits and the broader Jobless number. The Jobless number goes from being regularly 20-50,000 above the combined benefit number to being 50,000 below the number. Here is your graph when done properly.

Your HLFS graph line has now switched to "jobless" rather than "unemployed" producing a higher number.

The last time the "jobless" were above the number on benefits was the period during 1989 - 1993, also a substantial recession which featured higher unemployment than the latest.

Anyway, had you included your original graph line of officially "unemployed" it would fall well below the number supported on the combined SIU. Why did you drop it?

It doesn't matter if I use a Jobless graph or an Unemployment graph. Both numbers track each other. The issue I am discussing is a broad relationship question. if i had used the smaller HLFS unemployed number for the graph it would have shown that for a number of years the combined beneficiary number (Unemployed, sickness and invalid) was usually a certain number higher than the very narrow HLFS number. That changed in the mid to late 2000s and the gap has radically narrowed. I don't beleive there are economic reasons for that to happen. I believe that restricting legitimate access to the benefit has occurred.