This week the Planning Committee of the Whangarei District Council (WDC) received a bulky report about long-term trends in the number of consents issued by the Council. The report, it says, presents “a useful picture of how development in the district is progressing” over a 12 year period to June 2013.

Indeed it does, and the picture is not pretty. The figures state what many of those at the coal-face have known for many years – the level of economic activity in our region has virtually collapsed.

The 12 year time span includes a full property cycle, from the start of the boom in 2002, through to its peak in 2008 and the five years of bust through to 2013. All things being equal, one could reasonably expect land based economic activity to be somewhere near 2003 levels. Unfortunately that is not the case. Land based activity in the Whangarei District has collapsed. This extract sums up the dramatic decline.

“The number of resource consents received has declined markedly since 2001/02, from over 600 to 224 in 2012/13. The number of consents received in the last year was the lowest since reporting began… The most significant drop was from 2007/08 – 2008/09, where consents received dropped by approximately 41%.” (See Resource Consents Received graph, with my lines added to show the timing of major events.)  All graphs shown are from the WDC report. 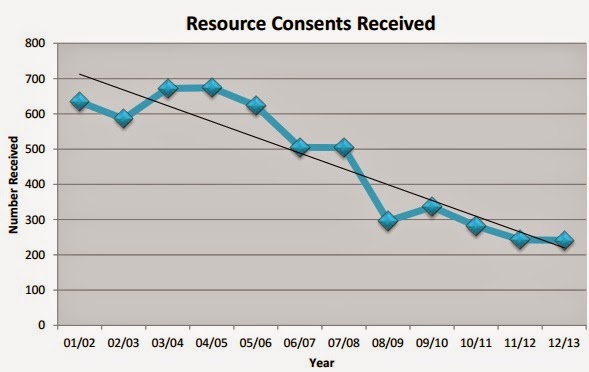 The decline in resource consent numbers is consistent with the collapse in subdivision consent applications. The following graphs show the number of subdivision consents granted in the city, rural (countryside) and coastal (coastal countryside) areas. (Granted does not necessarily mean lots created as some developments may not proceed to completion.) 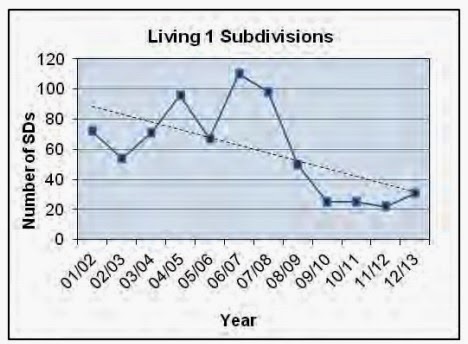 All areas have had a significant decline in subdivision activity, but in the rural and coastal areas particularly so.

As to reasons for the decline the report states:

“In March 2006, as a result of a ruling from the Environment Court, the minimum lot size for a controlled subdivision in the Countryside and Coastal Countryside Environments was increased from 4ha and 6ha respectively, to 20ha...Following this decision, it appears that there was a relative decrease in the number of subdivisions occurring in these environments, possibly because the decision would make for less attractive subdivision options.”

Although the report writer goes on to state the drop off lasted “only until 2007/08” the graphs show otherwise. The direct effect of the higher subdivision threshold has caused subdivision activity to halve in the countryside and coastal countryside areas, and remain at that level. No doubt the green activists will be clapping and cheering that they have succeeded in their objective of making subdivision in rural and coastal areas more difficult.

It seems the WDC too has the objective of limiting economic activity in the rural and coastal areas, given the comment in the report which says, “An increase of subdivisions occurring in rural environments…is contrary to the philosophy of the Whangarei District Growth Strategy.”

To have a Growth Strategy that specifically aims to limit subdivision would be comical if it were a scene from “Yes Minister”.  Unfortunately such absurdities from council planners are a reality, not only in Whangarei but throughout New Zealand.

A further factor is the impact of Council’s development contribution levies, which it imposed from 1 July 2005, and first shows up in the 2005/06 figures. Those fees add at least $20,000 to the cost of building a new dwelling.

Isolating and quantifying the effect of the 20ha rule and the introduction of the development impact levies in dollar terms is not an easy exercise, but it’s fair to say the combined effect is between 100 and 200 fewer consents annually. Assuming an average building cost of $335,000 a home that represents a loss of economic activity of about $50m a year from the local economy. The local economy took another much larger hit from the global financial crisis of early 2008 which reduced that number of consents by some 300 annually (or $100m).

The issue for councillors is to firstly acknowledge the impact their restrictive planning laws and development fees has had on economic activity. If they admit that, then the next question is what they could do to address the problem. In my view a good start would be to remove development impact levies on new dwellings which only earn the WDC about $1.5m a year anyway. Then they could bring some sense back to the minimum lot size rules by reducing the 50ha lot size in the countryside and coastal countryside environments back to the traditional 10 acre (4ha) lot size. Those two things would go some way to removing the barriers to getting the local economy working again.

its hard to believe Frank, that only a little distance from Auckland the economy collapses. It is such beautiful country up there, i come when I can ,I drive this car, the roads are good, I think one day soon Frank the New Zealander and tourist wake up to the North

Why have any minimum size? Or any density rules? There would not be a place on earth more desirable to live yet nobody goes there?
A fine achievement by the local councils.

..this 'Planet Earth' is for Humanity to live on and enjoy.....OK 'green-activists' in all their low-life forms should just book a one-way ticket to 'mars'....

The appeal of the District is that it does not ahve high density McMansions crammed on 500m2 sections. This is one good reason that the district is different to Auckland. And mother earth is not for Humanity. This thinking is what has led us to the 6th major known extinction in the life of the Planet. Humanity depends on the Planet, she does not depend on humanity. And even when the Cpt747 of this world have buggered this planet beyond existence of humanitye, life will go on in one form or an other. It just will not be man.