In Parliament this week the Prime Minister said:

"... through a strong economy and the welfare reform measures this Government has undertaken, we now have the lowest number of people on the equivalent of the old DPB since 1988."

Strictly speaking this is true and surely very good news?

The complication is benefit changes.

To get a clearer picture I asked MSD for the number of sole parents on any benefit and compared it to earlier data. Roughly, this compares pre to post GFC.

At September 2006 there were 107,628 sole parents on welfare. (By December 2007 to number had dropped further to 103,366 but I don't have the additional info for that date.) The following table provides a breakdown of sole parents by benefit type. Note that 88 percent were on the DPB. 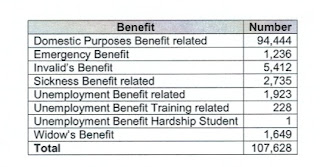 By June 2015 the percentage of sole parents on the "equivalent of the old DPB" - Sole Parent Support - had dropped to 76 percent.


So we can frame this another way.

The percentage of sole parents on welfare benefits other than "the equivalent of the old DPB" has doubled.

Of course, it's good news that there are 12 percent fewer sole parents on welfare since December 2007. The employment rate of sole parents has steadily increased. But as my previous post illustrated, the core behaviour that drives long-term  welfare dependency and child poverty is relentless. Beneficiaries continue to add 'newborn' children to existing benefits, most commonly, Sole Parent Support. 35 every day in the six months to March 2015.

I reserve my excitement for the day that steady trend line, which dates back to at least 1993, starts to decline.

Yes good post Lindsay. The jobseeker programm is hard to accomplish originally .
However once you are in the system things seem to go well.
Many overseas people re coming here collecting residences and permanent residence then straight on the system, and undercover work without tax .

Paul, where did you get that information, do you have facts and figures to support it? When I came here immigrants could not get benefits until they had had Permanent residence for 2 years, Also, of all the ones I know I don't know any who have had a benefit after 12 years.

Where taxpayers are the sole providers for a family, the family should be offered free long term contraception. This would save future generations, some of the social problems that accumulate with some of these families.

As long as we offer money incentives, through welfare payments, we will continue to encourage those with no ambition to work or train for their futures a ( in their minds) viable source of extra cash by having as many children as possible and now we have a movement in our schools and other well minded people to provide food, shoes, meals and even clothing for these poor children who we call whom we call 'living in poverty' but are really children living because of parent neglect. All this will do is result in those same adults to breed even more children.