In July last year, the European Court of Human Rights (ECtHR) rapped Italy across the knuckles for not having either marriage or registered civil partnerships (civil unions for short) available to same-sex couples, which it said was discriminatory as it denies such couples the opportunity to achieve legal recognition of their relationship.

After a fractious debate that saw PM Matteo Renzi turning the issue into one of confidence in his government, the Italian Senate voted last week to introduce civil unions (hitherto not on the books at all) open to both ‘hetero’ and ‘homo’ couples. The lower house of parliament will assuredly follow suit.

Viva l’Italia! – until the ECtHR went in to bat for the gay lobby…

The ECtHR is an organ of the Council of Europe (not to be confused with the EU – the Council of Europe has 47 member states including the 28 EU countries). Its remit is the interpretation and application of the European Convention on Human Rights (ECHR) and associated Protocols. Cases can be brought to the ECtHR by states or by individuals (singly or in groups) against member states for alleged infringements of Convention rights. Despite not being a truly ‘international’ court such as the International Court of Justice, the ECtHR’s pronouncements are widely regarded as authoritative and have a significant impact on legal thinking at the international level. When the ECtHR speaks, everyone listens. But they don’t have to obey: member states including the UK and Turkey have spurned the Court on occasion. This tends to happen when a member state feels that the Court is trying to exercise undue influence over the way it conducts its domestic affairs. Which, I believe, is exactly what has been going on here.

Over the past few years, cases have been brought to the ECtHR by same-sex couples claiming to be discriminated against by their countries. The ECtHR has not been a push-over for the same-sex marriage lobby. In Schalk and Kopf v Austria 2010, the Court held that Article 12 of the ECHR (Right to marry) clearly targeted male-female marriage. In Gas and Dubois v France 2012, the Court came down firmly against the proposition that there is a right to same-sex marriage embedded in the ECHR.

International law generally regards marriage as a matter for national law-makers to deal with, and is invoked only where stipulated standards of human rights are breached, such as those pertaining to gender equity. On the whole, what a country’s law-makers decide on in this context comes within the ‘margin of appreciation’ – the leeway that sovereign nation-states enjoy when making law. The same ‘margin of appreciation’ presumably applies to ‘registered civil partnerships’ – Italy is one of 8 EU states that did not have civil union on their books, and many other Council of Europe members don’t either.

The Italians are entirely within their rights to deny same-sex couples access to marriage. As for civil union, that was not available to anybody because it didn’t actually exist in Italian law, and so it would be nonsensical to argue that a specific group was being denied access to it. (As an aside, numerous Italian municipalities have been offering civil unions to both kinds of couples under their own bye-laws for quite some time, but those are not recognised outside the awarding municipality.) Furthermore, the national parliamentarians would have been acting within their rights were they to have brought civil unions into existence only for ‘hetero’ couples. So why did the ECtHR rap Italy across the knuckles last year?

To return to where we began, the bone of contention was that there were no provisions at all enabling same-sex couples to achieve legal recognition of their relationship. The message the Court sent Italy was clear enough: others have done it, so why not you? But quite a few ‘others’ have not. Numerous commentators have made noises along the lines that Italy was the only ‘major’ European country to not have jumped on the same-sex relationship legalisation bandwagon. There has been an awful lot of question-begging and cajoling here that I for one don’t regard as kosher. And I definitely detect a shift in the Court’s position towards advocacy in favour of the legal recognition of same-sex relationships. 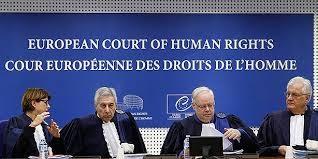 ECtHR judges – getting too big for their boots!

The Court was clearly forcing the Italians’ hand: either legislate for same-sex marriage or for civil unions open to same-sex couples or we’ll declare you guilty of discrimination. Granted, the Italian Constitutional Court had already said much the same thing, but that’s between the Italian Constitutional Court and the Italian parliament – a matter of relations among the trias politica of a sovereign state. In wagging the finger in this manner, the ECtHR crossed the line from evaluating the compliance of national law with the ECHR to dictating to member states what to legislate on in relation to their domestic affairs.

In the end, the Senate law-makers capitulated. PM Renzi is pleased because he was supportive of the legislation – he called it ‘historic’. But a great many people are not pleased, including the gay lobby as the bill had to be watered down by removing a clause that would have enabled ‘stepchild adoption’ where one of the partners is the biological parent. Polls indicate that Italians on the whole are averse to homosexual couples having children, and many felt that ‘stepchild adoption’ would be a step on the way to their using surrogacy to have kids. Surrogacy is a no-no in Italy for anyone, conservative firebrand Angelino Alfano speaking for many when he referred to surrogacy as a ‘sex crime’ and advocated tossing people who use surrogates in jail.

There is already talk of a Constitutional Court challenge to the removal of the ‘stepchild adoption’ provision for same-sex couples, and if that fails you can bet your bottom dollar that the ECtHR will get involved again – and will decide in favour of the litigants, given that the Italians have left themselves wide open to a charge of not treating same-sex couples ‘equally’.

Angelino Alfano: “It was a beautiful gift to Italy to have prevented same-sex couples from having a child, as nature prevents that.” But I doubt whether the ECtHR will concur…

I maintain that the ECtHR overstepped the mark. They should not stick their noses into member states’ domestic affairs except where domestic legislation blatantly violates clear human rights norms that those countries have signed up to – and that was most certainly not the case in this instance. I was disappointed to see the Italian national law-makers caving in – they should have stuck to their guns and told the ECtHR to get stuffed, as others have done before them. In yielding, they have surrendered part of their sovereignty. Unfortunately, ‘sovereignty’ seems to count for precious little when the ‘human rights’ Trojan Horse is harnessed to a fashionable social cause being aggressively promoted by a vociferous minority that enjoys a high media profile.

Who will rid us of these troublesome European Priests.