Barend Vlaardingerbroek: What the Aussie postal ballot tells us about the future of democracy

You’ve got to hand it to the Aussies for originality. There’s a divisive social issue the Government would rather not have to deal with (same-sex marriage – SSM), so let’s have a postal ‘survey’ to gauge public opinion and then we might put the issue to a vote in parliament or we might not, depending on the outcome. Real cutting-edge leadership, Mal.

Just in case anyone is in any doubt, this was neither a referendum nor a plebiscite, either of which would have been conducted under the auspices of the Australian Electoral Commission. Instead, this show was run by the Australian Bureau of Statistics, and participation wasn’t compulsory as it would be under Australian electoral law. 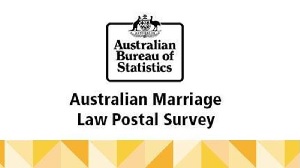 Got money – AUD122 million to be precise – to burn? Run a postal ballot to help the PM make up his mind whether to put an issue to parliament or not!

It was certainly a high-stakes ‘survey’, though. The Australian High Court in 2013 struck down an ACT amendment that would have allowed SSM on the grounds that this contravened federal law, which good old John Howard had seen to it had been immunised against the SSM challenge by the stipulation that marriage is between a man and a woman. The Court made it clear that no state or territory would be able to move in favour of enacting SSM before that hurdle was removed. So the battle-ground had moved to the federal level.

Malcolm Turnbull was in a fix over the issue – had he put it to a vote in the federal parliament it would almost certainly have gone through, and he was under pressure from the very formidable federal conservative lobby to circumvent a parliamentary vote. He came up with a plan that would see him come out of it smelling of roses whichever way things went: put it to the people in the form of a non-binding ballot and then decide on the basis of the outcome whether to put the matter to parliament or not. This appeased the conservatives, while at the same time he curried favour with the Left by making a public song and dance about how he and the missus were going to vote ‘Yes’. A ‘Yes’ vote in both the survey and the House and he would be able to tell the conservatives that he had done all he could to forestall the inevitable; a ‘No’ vote in the survey would have meant that there would have been no vote in the House but it wouldn’t have been his fault as that was the deal he had had to strike with the conservatives.

The campaigning for this high-stakes ‘survey’ was intense, and this was reflected in the high ‘turn-out’ (not quite the appropriate term given that nobody had to go to a polling station, but one widely used by commentators nonetheless). The ‘Yes’ mob trotted out the usual non sequiturs such as ‘marriage equality’ (begging the question that that which is fundamentally different is actually the same) and the ‘love is love’ inanity (love not being a statutory requirement for marriage, and therefore irrelevant to the issue at stake). The ‘No’ campaign impressed me much more favourably – they focused largely on the consequences and concomitants of SSM, such as bakers and photographers being denied their rights of conscientious objection by declining jobs, and denying parents the right to object to the normalisation of homosexuality in the school curriculum. The ‘No’ campaign was so slick that it had the ‘Yes’ crowd worried from the first ‘No’ TV advert, and that’s when the dirty tricks began – a doctor who appeared in that advert was reported to the AMA (Australian Medical Association) for unprofessional conduct with calls for her to be struck off. 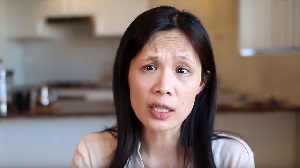 Dr Patsy Lai found herself the subject of complaints about professional misconduct in appearing in a ‘No’ TV advert. Not that she said anything ‘hateful’…

I shouldn’t really say that’s when the dirty tricks began, as those started three years earlier when the Catholic Church was reported to the PC Inquisition (a.k.a. Human Rights Commission) for supposedly offensive/hateful speech arising from their brochure “Don’t Mess With Marriage”. Homosexuality wasn’t even mentioned, but hey, you’re not allowed to defend traditional marriage in these ‘progressive’ days, no matter how politely you do so, as you’re going to mortally ‘offend’ someone. The Church stood its ground and the matter went nowhere, but people with fewer resources to call upon may well have buckled under the pressure and recanted (to use a term from the heresy trials of yesteryear which unfortunately seems to be a promising candidate for rejuvenation).

Any public entity or personage that expressed opposition to SSM, or was even associated with the opposition to it, became the butt of a tarring-and-feathering job – tennis champion Margaret Court and Coopers Breweries were prominent examples. Churches openly opposed to SSM were picketed. A small group of students at Sydney Uni advocating a ‘No’ vote were physically harassed. The message has been loud and clear: voice an opinion against amending the Marriage Act to allow SSM and you will be systematically targeted for public vilification. 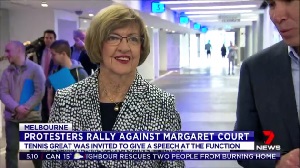 Margaret Court, former tennis star, then Public Enemy No. 1 for speaking out against SSM 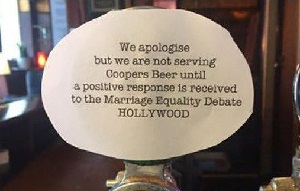 Coopers found itself in the crosshairs because of a Bible Society video encouraging people to discuss and debate SSM civilly (while drinking their premium Light….) Shock horror! Close them down!

We are no longer talking about SSM now but about the future of democracy. The democratic tradition of open and vigorous public debate is no longer in vogue as those expressing unfashionable contra views will be hit with ‘offending’ or inciting hatred against some group. The prattle about ‘inclusiveness’ and ‘diversity’ is a smokescreen for the emergence of a new form of totalitarian collectivism.

The up-coming generation don’t seem to realise that democracy has two drivers: the right to advocate, and the right to dissent. It would quite possibly come as a surprise to many to learn that the latter persists even after legislation has been passed. That does not mean that we can disobey a law because we don’t like it, but we can be as vociferous as we like about disagreeing with it. We must all pay our taxes, but there is nothing stopping us ranting and raving about the wrongfulness of the taxation system and lobbying  to get it changed. Ditto for SSM: once SSM has been enacted, we must recognise the fact that Jim and Bill or Susan and Sally are legally married, but there should be nothing stopping us from voicing the opinion that the law ought not to enable two guys or two gals to marry, and that the amendment should be revoked.

I was irked by the AMA jumping on the SSM bandwagon. The AMA seems to have appointed itself an authority on social and moral issues, which it is not – a neurosurgeon’s moral take on ‘gay marriage’ carries no more weight than that of my office cleaner. In this instance, the AMA oligarchy dressed up their moral judgement in supposedly medical garb by claiming that the poorer health status of the LGBTQI++ community relative to heterosexuals, and their higher suicide rates, were attributable to being a discriminated-against minority and would be exacerbated by denying them the right to marry – this is drawing a very long bow indeed, and it’s really got nothing to do with medicine. What next – medical and related associations declaring opponents of SSM, transsexualism, etc., to be mentally deranged? There are shades here of the bad old days of the USSR when people were forcibly committed to psychiatric institutions for their religious beliefs.

Anyway, it’s all over bar the shouting – the federal parliament is bringing SSM in and then the states and territories can follow suit.

We in the West are in trouble, folks – big trouble. Democracy as we have long known it is on the way out. As for what is  replacing it, we are seeing the shape of the future in the form of campaigns such as the one leading to this recent postal ballot and I for one do not like what I see.


Barend Vlaardingerbroek BA, BSc, BEdSt, PGDipLaws, MAppSc, PhD is an associate professor of education at the American University of Beirut and is a regular commentator on social and political issues. Feedback welcome at bv00@aub.edu.lb

Climate change represents a major threat to New Zealand – but not because of the emissions produced by cows and sheep or from driving cars...