I had to groan when the BBC newsreader a couple of weeks back announced that there was a renewed dispute over the hijab, the ‘Muslim headscarf’. As though that were news, having been a bone of contention in Western societies for years now.

The way Muslim women dress seems to be of immense interest to some people to the point of fetishism. Remember the row about the ‘burkini’?  There was a furore in France when women and girls were being accosted by police on some beaches for wearing this bathing outfit. 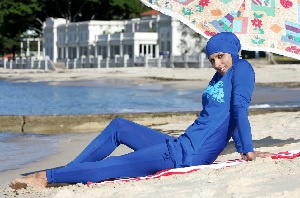 The ‘burkini’ – hardly likely to subvert public morals, is it?

Back to the hijab. It wasn’t ‘political’ this time – like a renewed drive to ban it from schools and government departments – but a squabble between feminists who say that it is a symbol of female oppression and other feminists who say that it is empowering for women. Being a mere male, I would never understand such profundities, so I’ll desist from commenting and thereby risking making a total fool of myself.

It should be within the limits of my mental capacity to be able to comment sensibly on female head attire as such, though. In many cultures, it has for many centuries been customary for women to don some sort of head-cover. These vary from a square of light cloth that is draped over the head and tied beneath the chin or the ear to an amorphous whole-body sac with slits, sometimes muslin-covered, for the eyes. The headscarf is somewhere in between, being a long rectangular piece of cloth that is wrapped around the head but leaves the face uncovered. 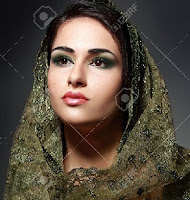 The hijab (middle) is just one kind of headscarf 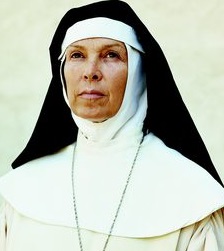 It’s not just Muslim women who ‘cover up’, is it?

So far, we have been looking at head coverings that leave the face exposed. But now we make a quantum leap to face coverings. 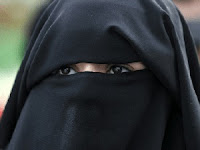 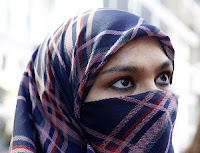 Do we group the young lady on the right with the hijab crowd or the burqa crowd? I say the latter, because recognition from the eyes alone is impossible unless one knows the wearer.

Western society frowns upon the wearing of any head-gear that covers the face, not just attire such as the burqa or the niqab. I can be apprehended if I walk into a bank with a full-face motorcycle helmet on. This is a genuine parallel because the problem is not that there is something supposedly offensive about motorcycle helmets as such, but rather the fact that I am obscuring my face. People who cover their faces are often up to no good, so it constitutes reasonable grounds for suspicion when someone does so.

The rule about not wearing helmets in banks pre-dates the public debate about Muslim female attire in the West. It sets a precedent for my saying to Muslim women, “You must not wear head-dress that covers your face. The problem is not that the gear is associated with Muslim culture. It is that, in wearing it, you are placing yourself in the same position that I do when I go into a bank still wearing my full-face helmet.”

We have a powerful argument in favour of banning the wearing of head-dress that obscures the face in public, then, and it has absolutely nothing to do with the religious identity of the wearer.  But there is no argument here in favour of coming down heavy on the hijab. A headscarf is a headscarf regardless of what religious associations it may have. In a secular society, we should not impose restrictions on people when they are doing things other people are doing just because they belong to some religious group. If headscarves are OK, then all headscarves are OK, including the hijab. I see no credible rationale for putting any sort of ban on headscarves of whatever ilk for women who choose to wear them.

At the same time, neither should we make allowances for people on the basis of their religious affiliation to enable them to do things others may not do. If donning attire that covers the face is not OK, then neither is it OK for Muslim women. If they are being treated the same way as everyone else, they can’t howl discrimination.

Of course, the reason why there has been so much fuss about Muslim female head-dress and the ‘burkini’ actually has little if anything to do with those items of apparel in themselves and a great deal to do with popular resentment against the encroaching ‘Islamisation’ (a word used a lot by anti-immigration parties) of Western, particularly some Western European, societies. The visibility of the hijab, given its popularity among Muslim women, has made it a focal point of that umbrage.

Some of my female Muslim students wear the hijab; some don’t. Many of those hijabs are quite attractive – many are multicoloured, some are even embroidered. Here in Lebanon, it’s largely a matter of choice, and those young ladies have, on the whole, made the choice – if their manner and bearing are anything to go by, the last thing I would call most of them is ‘oppressed’. My attitude if I were at a Western university would be no different.

Admittedly, my attitude towards mass immigration, particularly of the illegal kind, from mostly Muslim-majority countries in Africa and the Middle East is decidedly negative, even hostile. But I do not dress that stance up as a spurious objection to the wearing of a headscarf.

A girl age 9 does not have a choice to wear a hijab. Women in Iran have no choice either and have been celebrating their discarding of this cloth on social media at considerable risk to themselves. Women in many islamic countries face harassment or worse if they don’t wear a head covering. In Afghanistan you will be beaten if the ‘modesty police’ find you.
Point is, you don’t actually have a choice if you want to avoid problems. No one is forcing anyone to wear a nun’s habit. The hijab and worse, the burkha, is a big up yours, to assimilation into Western societies and in islamic countries, oppression of women and indicative of their second class status.

Trouble is, if you ban the hijab in Western countries, you either have to ban ALL head scarves, or admit that you are targeting Muslims, which amounts to religious discrimination.
I just don't agree that a headscarf which leaves the face fully exposed is an 'up yours' symbol. Head covers that hide the face may be - but they can be banned because they obscure the face, not because of any religious or political symbolism.

Every time I go up to the Bank New Zealand BNZ the Palms in Christchurch I get snarled at by some vixen. >>" Take off your hat "". Why I don't know. its a harmless cotton beige thing to hide my baldness. Almost but not quite enough stand over harassment to go back to the Australian banks.

Headscarves are pretty ordinary to wear when out and about for any Western female as well as the Eastern ones. It is the face covering that is the problem and any country that doesn't ban it in public should also tolerate full face motorcycle helmets, balaclavas, and any other form of face cover in any public place. I would be very wary of any car driver with face cover - their view and ability to assess traffic is obviously impaired. And I would hate to see anyone in a public situation wearing face cover like teaching, working in shops or banks or in any other place that they have public contact. Personally I would avoid them and move on to someone without a face mask.

Beirut is, of course, part of the Muslim world which has changed due to Islamic resurgence which has changed attitudes to head-coverings. I saw no female students there, or in Iran, wearing head-coverings in the mid-1970s. They are a political statement, especially in the West. Given that Islam’s scriptures, doctrines, history, rhetoric, actions, organisations and individuals insist on conquering the non-Muslim world, it is naïve to think that head-coverings don’t form part of this political activism. They are a symbol of separation and difference, the flag of Islamism, an identity statement, ‘this is my uniform’ deal with it!’, virtue signalling, putting their head above the parapet; the fetishisation of hair; expressing a desire to stand apart from the mainstream West, or even to isolate themselves from wider society. These stigmata of Islam are a necessary protection from the predations of Muslim men, a signal to them that they are Muslim and thus under the protection of both their religion and another man, be it father, brother or husband. It hides bruises and acid scarring. It is intrinsically intertwined with Islamic concepts of purity, honour and shame. It is indicative of increased submission; and while formerly a mere tradition, it is now seen as an obligatory and vigorous assertion of Muslim identity. Without this preservation of modesty, Muslims regard women as immoral. The burkini, as an example, is an Islamist tool, but instead is turned into a symbol of human rights. In the West, it inhibits civic, cultural and interpersonal involvement and trust. It is, in short, a demonstration of the imposition of Islamic will on infidel culture and a small but necessary step in its conquest.

BNZ "IS" an Australian bank

Ideological statements, no matter how eloquently expressed, do not necessarily provide a guide for action in the real world.

Sunglasses are another uncomftable piece of attire. Wearing sunglasses hides ones eyes and so makes one hard to identify. It is sort of a convention to take sunglasses off when talking face to face with someone.
I agree that covering the face is a no no, and agree that headscarves are ok if they don't also cover the face.