Barend Vlaardingerbroek: ‘Affirmative action’ – an obstacle for some ‘minorities’

AA is both sex-based and race-based.

The former is not the issue it was a few years back, although it remains a thorn in the side for many a man sidelined for appointment or promotion because he had the misfortune to be up against a woman and thus the cards were stacked against him whatever his credentials. But it is race-based AA that is under the spotlight not because it has trodden on the toes of any nebulous ‘majority’ but rather those of some ‘minorities’. 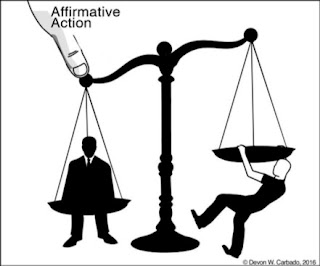 Some call it ‘positive discrimination’. Whatever euphemism it goes by, it relegates White males to the back of the queue.

In the US, tertiary education has been shaping up as a race-based-AA battleground for quite some time. An Asian American in 2006 launched a successful legal challenge in California to the practice of subtracting 50 points from the SAT scores of Asians while adding 240 to that of Negroes and 185 to that of Latinos. Since that case, they’ve had to be more circumspect about the application of AA, but it has continued nonetheless by ‘taking race into account’ when processing admissions applications. 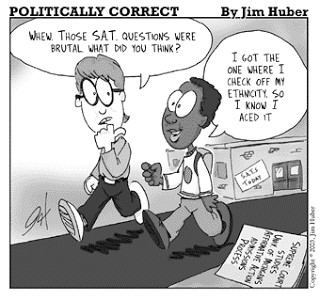 Not surprisingly, it is Americans of Asian (including Indian) extraction who have become vociferous about AA in higher education. On the basis of demographics, Asian Americans have long been overrepresented in the nation’s top universities and the elite programmes – a
reflection of the value they place on attaining such goals and the sacrifice and effort they put into achieving them. 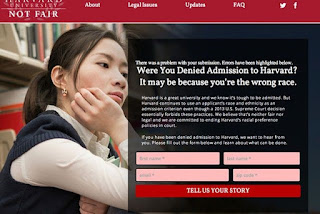 ‘Minorities’ that traditionally work their butts off to make it in life have joined White boys in being passed over in favour of other ‘minorities’.

It is ironical that it is these ‘minorities’ who are now clamouring for equal treatment. In a democracy everyone ought, by definition, to be treated equally. If I need a certain score in an entrance examination to get into a highly competitive-entry university programme, so should you, whoever and whatever you are. Meritocracy flows naturally from the democratic imperative of equal treatment.

Ensuring equality of opportunity is within the purview of the State. The US isn’t the best model at the best of times given the prominence of the elite private university sector that favours the wealthy, unlike NZ where all universities are public and where my generation at least benefited from truly equal treatment through public examinations such as the UE and UB in which the sex and race of candidates played absolutely no part. We were markedly meritocratic once, as evidenced by the number of higher professionals of humble social class origins who are encountered among New Zealanders of my age group.

Things went off the rails when equity began to replace equality. Equity alludes to equality of outcomes for ‘groups’ identified with reference to sex, race or some other arbitrary attribute, and I do not believe that a democratic State has any role to play in it. The State should create a level playing field by instigating meritocratic selection mechanisms, but what subsequently creates individual outcomes is up to those individuals to bring about through choices they make, such as choosing to study and work hard rather than getting into all sorts of mischief in their spare time. Personal values and individual effort translate ‘opportunity’ into ‘outcomes’. Meddling by the State in this process amounts to blatant social engineering. It is un-meritocratic and thereby un-democratic.

But the PC-totalitarians don’t like any mention of individuals making choices. They are the ultimate determinists: what happens to you is attributable to your ‘group’ identity, not to the exercise of free will. If you are White and male and succeed it’s because you’re White and male, not because you expended a lot of time and energy on improving yourself. The simplistic marxofascist paradigm has it that those who did not succeed because they made the opposite choices must be the victims of oppression/discrimination by those who did, and so the State has to step in and institute reverse discrimination, which is what AA is.

Gender and racial favouritism through AA sees many a competent and promising White guy being passed over in employment decisions. 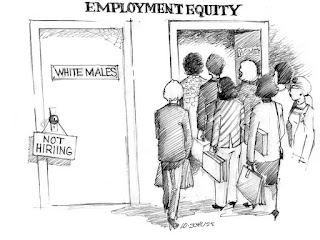 A few months ago, the US Federal Aviation Authority issued a directive to the effect that there were too many White males in airport control towers and demanding that more non-White-males be appointed. Brace yourself for more near-misses and maybe a few mid-air collisions and the like, although no doubt local authorities will try to ensure that there are enough strategically placed White males in the system to keep it running properly (touch wood).

There are occasional but growing rumblings about White girls being sidelined for racial reasons as well. Sex-based and race-based AA are not infrequently at loggerheads during selection procedures. The latter appears to have the upper hand right now but keep watching that space. It may be that internal conflict which shakes the citadel of AA so hard that it comes crashing down.

And then there was this nonsense of male Engineers using mathematics, physics and safety margins to design bridges.
The all female Munilla Construction Company built the Florida University bridge without any of that social construct, or later, blame.
I have done massive homework on Trump and we still have the Neocon New World Order Oil and power problem in Syria and Iran. The Trump association with Rothschild comes from his Atlanta Casino and a struggling Chicago project. There is simply no question now that the ISIS type terrorists were born in Afghanistan with the help of the [external to USA controlled] CIA, grew up in Libya and now firmly supported in Syria soon Iran. My guess is that > you step out of line on Syria or Iran Mr Trump you die, in return all the USA, NATO, Russia Ukraine stuff that's yours.