When will New Zealand dairy farmers wake up and realise that Fonterra Co-operative Group needs a massive shake-up?

When will farmers grasp that the group’s poor performance has a massive impact on their pockets, with this column estimating that the average NZ dairy farmer has missed out on over $1.5 million of tax-free capital gains over the past nine years?

The most depressing section of Fonterra’s recently released annual report is the historical financial summary on page 62. This shows that the farmgate milk price has fallen 20.4 per cent since 2014, the co-op’s dividend is the same as 2014 and its shares have a dividend yield of only 1.7 per cent.


The co-op’s share price has declined 6.7 per cent since 2014 while the share prices of the two NZX-listed dairy companies, a2 Milk and Synlait, have soared 19 times and 3.5 times respectively over the same period.

Meanwhile, the share price of the Ireland-based Kerry Group, which has a similar background to Fonterra, has appreciated 73 per cent since 2014 and the Irish company has a sharemarket value of €17b ($29.4b), compared with Fonterra’s $8.0b.

Fonterra’s core problem is that it wants to be a major global player but doesn’t have sufficient equity to achieve this goal.

When the co-op makes a mistake, as it did when it paid $750m for 18.8 per cent of China’s Beingmate Baby & Child Food in March 2015, it has a devastating impact on the farmer-owned group.

That year, Fonterra went on a $2.2b spending spree and its July 2015 balance sheet showed that almost all of this expenditure was financed by borrowings. Total farmer equity remained static at $6.5b in the year to July 2015 while borrowings soared from $4.9b to $7.6b.

This debt-funded growth strategy has been a disaster for the co-operative.

Fonterra was formed in 2001 through the merger of the country’s two largest co-operatives, Waikato-based New Zealand Dairy Group and Taranaki-based Kiwi Co-operative Dairies.

The new group also included the New Zealand Dairy Board, which had been the marketing and export agent for the country’s dairy co-operatives.

This was a huge problem for the co-op as large amounts of equity washed in and out of its balance sheet each year as production fluctuated.

Under the proposal, a new company called Fonterra Limited would be formed with Fonterra Co-operative transferring all its assets and liabilities to the new entity.

The new company would list on the NZX, with farmers owning 65 per cent through Fonterra Co-operative Group, and a further 15 per cent in their own name. The remaining 20 per cent would be held by the public, although no shareholder, except the co-op, could hold more than 10 per cent of the listed company.

In 1986, dairy farmers in the southwest of Ireland approved the transfer of all the assets and liabilities of Kerry Co-operative to a new company called Kerry Group. Kerry was the country’s fourth largest dairy co-op with a 16 per cent market share.

Kerry Group has been a huge success. Farmers voted to abolish the two-tier share structure and the co-op has reduced its shareholding from 80 per cent to 14 per cent, mainly through the distribution of shares to co-op farmer shareholders.

If farmers had adopted the 2007 proposal, and Fonterra had been as successful as Kerry Group, then the average NZ dairy farmer would have experienced a capital gain of at least $1.5m on their shareholdings over the past decade.

This is a flawed strategy when shareholder farmers want to maximise their farmgate milk price and the co-op has minimal retained earnings.

The figures in the accompanying table show clearly why Fonterra is struggling. 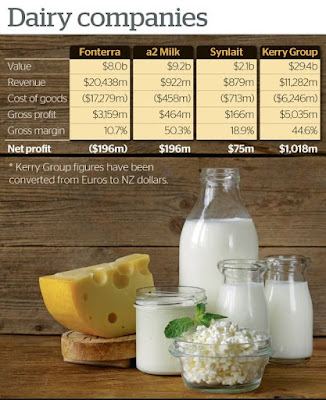 The four companies have different business models but the figures show that Fonterra is deriving little benefit from its overly generous chief executive remuneration, the 5995 staff members who receive remuneration of $100,000 or more, the reported lavish staff parties in California and China and widespread use of expensive consultants.

Fonterra should have its head office in Hamilton, the heart of the country’s dairy industry.

But the big hit to Fonterra’s earnings in the July 2018 year was the $439m writedown in the value of its Beingmate investment.

This 18.8 per cent holding, which cost $750m financed through borrowed funds, was like the flawed strategy of our failed investment companies in the 1980s.

It was a high-risk investment, particularly as a2 Milk had a sharemarket value of only $370m at the time and could have been fully acquired by Fonterra for around $500m.

When companies are in trouble they usually take three initiatives: they change the chairman; change their chief executive; and have a major capital raising. Fletcher Building has done all three, raising $736m of new equity earlier this year.

John Monaghan has been appointed Fonterra chairman and Miles Hurrell as CEO but there has been no capital raising.

Fonterra director Scott St John told the recent Shareholders’ Association annual conference that farmers would be willing to subscribe new capital to their co-op. St John’s comment was greeted with groans from several dairy farmers at the back of the conference.

If St John and his fellow directors believe that farmers are willing to subscribe more capital, then Fonterra should raise between $500m and $1b of new equity from co-op shareholders.

But the harsh reality is that large pension, superannuation and KiwiSaver funds are the major suppliers of new equity.

Consequently, Fonterra needs to dust off its 2007 proposal to create Fonterra Limited and list this on the NZX, with the co-op being a major, but not 100 per cent shareholder.

Kerry Group has benefited from this strategy and a2 and Synlait have shown that full stock exchange listings can supercharge well-planned growth strategies.

If Fonterra doesn’t restructure and/or raise more capital, then Monaghan and Hurrell have been tossed into the deep with heavy chains tied to their ankles.