Barend Vlaardingerbroek: A critical appraisal of the Novichok incident narrative

What we have here, it seems to me, is an attempt by the UK to limit the damage to its own reputation – damage perhaps it never envisaged, because it assumed everyone would “buy” the “wicked Russia” story. - Mary Dejevsky in The Independent, 24 May

The murky world of secret operations by State intelligence units is one that we seldom get much of a look into – well, if we did, it wouldn’t be ‘secret’ anymore, would it? – but enough transpires to give us considerable insight into its workings.

When it comes to awarding first prize for clandestine operations aimed at liquidating individuals they don’t like, the Russian secret service would have to be the front-runner. For the past three quarters of a century, these furtive characters have built up a reputation for slick, targeted assassinations outside their own territory.

One that comes to mind is the ‘umbrella assassination’ of 1978 when a Bulgarian dissident called Markov, while walking on London Bridge, had injected into his thigh through the tip of an umbrella a small perforated platinum sphere containing the deadly poison ricin. A more recent one was the poisoning of Alexander Litvinenko in 2006, again in the UK, by means of radioactive plutonium slipped into his drink. It is rare indeed for the perpetrators to be caught. These folks are professionals.

Stealth and target specificity have long been hallmarks of the dirty tricks department of the Russian security intelligence services. How does the Novichok attack on Sergei and Yulia Skripal in Britain earlier this year square with that image?

Simple answer: it doesn’t. The narrative that we have been presented with runs as follows: two bods claimed by British intelligence to be GRU operatives shot in and out of the country to execute this mission. They stayed in the same hotel room (where ‘traces’ of the poison were reportedly detected) and are seen together on numerous CCTV images in London and Salisbury. They smeared Novichok from a fake Nina Ricci perfume bottle onto Sergei Skripal’s door handle, apparently spilling some on the doormat and elsewhere. They then made off across a park where they simply biffed the container, still containing a significant quantity of the toxin, away. 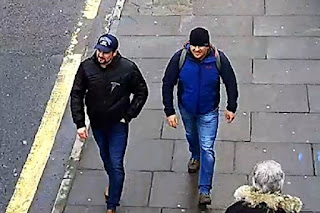 Upshot: Sergei and Julia Skripal were in a critical state in hospital; a policeman was also affected. A couple of days later, a British couple, Dawn Sturgess and Charlie Rowley, stumbled across the perfume bottle by accident; they handled it and ended up in hospital too, the former dying.

I find all this difficult to buy. Routine procedure for any hit-squad acting on foreign soil is to separate and keep out of sight. They stay under cover as long as they can and take measures to evade the prying eyes of surveillance equipment and to avoid recognition when they do have to venture out. These two jokers, on the other hand, might as well have advertised their movements in The Times.

Slapping a lethal organophosphate onto various objects such as door handles does not require a great deal of skill, but it does require steady nerves. There are indications that the operator was jittery – the apparent spillage, and then chucking the container away in the park, as though anxious to get the noxious stuff away from him as soon as he could.

Such slovenly actions invite undesirable consequences in the form of unintended casualties. A true professional assassin does not take bystanders’ lives if he can avoid it – especially not citizens of foreign countries on their home soil, which creates major problems for his bosses at home.

The kneejerk reaction of the British authorities when Sturgess and Rowley came to grief was to assume that they too had been targeted. A couple of days later, that part of the narrative had to be modified when it was realised that pure chance had brought them into contact with that perfume bottle.

Speaking of targeting, what about Yulia Skripal? She divided her time between London and Moscow, where she has a flat. There is no indication that the Kremlin had any bone to pick with Yulia; had they had one, a much tidier way of going about things would have been a motor ‘accident’ in Moscow. I don’t think she was ‘targeted’ any more than were the British couple. 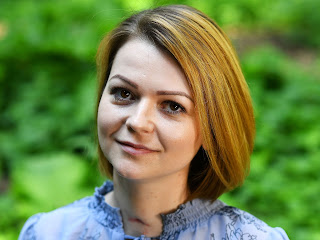 Yulia Skripal. Note the tracheotomy scar. A hit-and-run motor ‘accident’ back in Moscow, where she spent much of her time, would have been a neater and more sure way of getting rid of her – assuming anyone in the Kremlin wanted to get rid of her.

What it all adds up to is a shambolic job carried out by some bungling amateur(s), certainly not a ‘professional’ secret service operation. If you were to tell an old KGB hit-man that this was the work of Russian State assassins, he would fly into an indignant rage at such a grievous insult to his and his colleagues’ professionalism and thump you, and rightly so.

Amateurs can be useful at times – recall the two women in Malaysia conned into smearing the nerve agent VX onto the face of Kim Jong-nam last year. Could the Novichok incident have been perpetrated by some London petty criminal for a fistful of bucks? – just a thought. 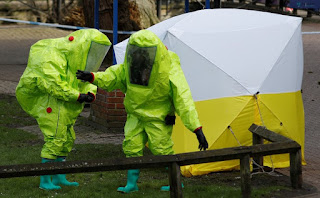 When you’re dealing with slapdash operators, you just don’t know where you’ll find the stuff

But wait, you say, this was a toxin of Russian origin, so there has to be a Russian connection.

Well, maybe. The Novichok project ran for 20 years, ending in 1993. It produced not one but a number of agents all of which are well known to Western intelligence and can be recognised by their molecular signatures. Thus when the hospital to which the Skripals were taken contacted the Ministry of Defence about a suspected nerve agent attack, they were put onto the Porton Down laboratory which engages in chemical weapons research and holds a lot of classified information pertaining thereto.

As for its source, let me quote Mary Dejevsky again:


At least one of the UK’s opening assertions – that Russia was the only country to have manufactured the nerve agent in question – was challenged early, by the head of the government’s own defence research establishment at Porton Down. Since then, it has been shown that the formula was in the public domain from the mid-1990s and that both the Czechs and the Germans had access to the substance and shared the expertise with their Western allies. So the presumption of Russian provenance, let alone Kremlin guilt, was always flawed.

The key word here is ‘presumption’. Indeed my problem with this whole narrative has been the preponderance of assumptions arising not from firm evidence but from growing Western distrust – paranoia, even – of Moscow.

Those two fellows on the CCTV images were followed up by some secretive group of internet sleuths who claimed they had made positive identifications with a bit of help from Russian military inside sources (hm………). One of them is supposedly a high-ranking GRU operative who was awarded Russia’s highest medal for his work in Chechnya. A BBC team went to the village he was born and raised in, where some people claimed to recognise him from the photo they were shown and others said they did not. The family didn’t want to be contacted.

Can you blame me for being just a trifle sceptical?

I would have left the questions surrounding the Novichok affair completely open had it not been for a word-choice made by the British Foreign Secretary days after the death of Dawn Sturgess when he said that he laid the blame on “the Russian State”. Why the inclusion of this word? Three weeks later, Theresa May reinforced my suspicions when she told Parliament that the incident had been the work of the Russian State and “not a rogue operation”.

Russian politics at the top are highly factionalised, and some of the factions are not at all on friendly terms with one another. The ruling clique in the Kremlin needs to have the support of key elements in the military and intelligence services (what a coincidence that Putin is an ex-KGB man). But that does not preclude opposing powerful factions having access to Novichok, albeit without their own means of effecting a delivery – something that would have to be left to non-secret service operators, either local or home-grown. Were the British Foreign Secretary and PM telling Putin and his inner circle, “We don’t necessarily think you ordered this, but the buck stops with you”? 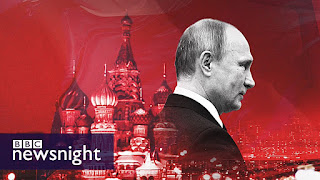 “The factions inside the Kremlin – is Putin still in full control?” was the subject of a BBC Newsnight feature in April

It’s a tempting hypothesis that whoever was behind this fiasco (for that is what it was) was a maverick faction in Moscow, but in the absence of hard evidence we should keep our minds open to alternatives. The trouble is that hard evidence is hard to come by given that fabrication and misinformation are part and parcel of the ‘intelligence’ game. Take nothing at face value.

The narrative thus far has been one tailor-made from Day 1 to the mindset of the old Cold War in which the USSR was the principal antagonist. The return of that mentality does not augur well for future Russian/Western relations and that is not good news given Russia’s return to the geopolitical arena as a major world power.

If the intention of the malefactors, whether a group of Russian conspirators or a third party intent on stirring up a hornets’ nest, was to deepen the rift between Putin’s Russia and the West, the mission was definitely a success, with the death of a British citizen thrown in as a bonus. All the precipitous jumping to rash conclusions that this affair has seen may well be playing into the hands of some devious, hitherto unidentified actor.

For those wishing to read succinct analysis , please refer to the web site Veterans Today and Michael Shrimpton's blog.If I wish to know the facts I refer to his blog. He is only interested in the Truth.

From Wikipedia:
"Michael Shrimpton (born 9 March 1957) is a former British barrister, former immigration judge, and politician noted for his conspiracy theories and hoaxes."
He was in fact barred from his profession and spent a year in jail for one of those hoaxes.
Not a good start, is it?