Over the centuries, governments have only excelled at two things. Killing (mainly by declaring wars) and stealing (mainly by taxation and redistribution).

In Part 1 (Killing) we draw attention to the unintended consequences of a misguided Fringe Benefit Tax introduced into Australia on 1st July 1986.

It was obviously introduced as a way of raising money to cover the unfunded liabilities of the over-generous superannuation and pensions schemes for politicians and public servants.

Surprisingly, it did not result in a vast expected cash flow as this industry, instead, modified their operations.

The unintended consequences were that employers promptly ceased providing housing and cars and in the case of the mining industry immediately stopped building homes and facilities in regional Australia. One example was Pancontinental Mining Ltd who, at the time of the Fringe Benefits Tax introduction, simply put their 30 Kalgoorlie homes on the market for sale because they ‘refused to pay an FBT fine’ just for providing homes to their employees.

Currently now, in 2019, there is a mounting public concern that this FIFO operation is virtually killing employees as suicides and mental health issues are seen, by some, to be a bi-product of FIFO.
I’m not debating this issue, other than to suggest that if they wish to blame FIFO for this problem, people should attack the cause, that being the absurd Fringe Benefits Tax.

A research document on ‘The unintended consequences of the Fringe Benefits Tax on regional Australia’ by Mannkal scholar, Patrick Leclezio, 8th April 2019 is here. 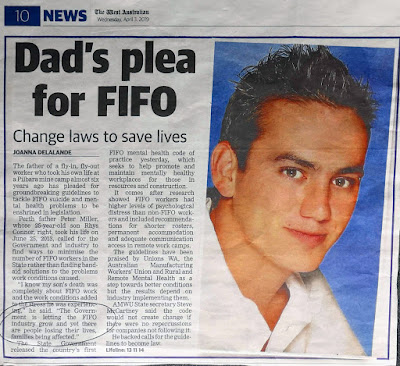