Barry Brill: Climate-wise – We Are The Champions!

All climate policy lobbyists worldwide see the word “leader” as being the holy grail. It is used in a quantitative  and competitive sense as in “country X is now in the lead” or “country Y is the clear leader”. Achieving leadership is positioned as a much-desired vanity project.

So who is the current gold medallist in the climate policy stakes?

New Zealand has fancied itself for some time. Back in 2008 then Prime Minister Helen Clarke declared: “New Zealand is now a world leader in its action programme on climate change. Labour will keep it that way.” 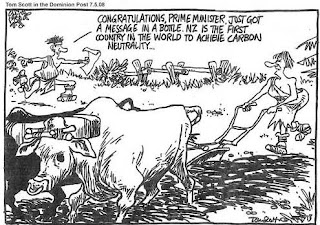 Under John Key, we then went for the gold medal at Copenhagen in 2009. We did the same pre-Paris in 2015, with Simon Bridges as Minister. But the Green Party now claims we need to legislate for carbon neutrality by 2050 to be sure of clutching the prize.

Looking past the rhetoric, we find that there are endless innovative ways to measure success, and the Green lobby (eg Carbon Tracker) can devise an argument that every developed country is the world’s worst. However, if we focus instead on relevant metrics and hard data, there can be little doubt that we have already scorched off the competition from the other 35 developed (OECD) countries.

New Zealand as a whole contributes a negative volume of carbon dioxide to the atmosphere. We are a net carbon sink. All those human-caused emissions from SUVs, tractors, coal power, cement, aircraft, NZ Steel, etc, etc – are all offset and absorbed by our forests and farmlands. If our whole country with all its 4.5 million people were to slip beneath the waves tomorrow, the world’s climate would be worse off!

NIWA scientists have carefully measured the atmospheric carbon dioxide on both sides of the country over a 36-month period, finding that New Zealand removes an average of 98 TgCO2 per year from the atmosphere. This is a net figure, after deducting the result of its human-caused emissions which amount to only 35 TgCO2 per year. That is a big contribution to the rest of the world.

The peer-reviewed scientific paper, Steinkamp et al (2017), notes that the bottom-up National Inventory Report (NIR) compiled by the Ministry for the Environment consistently under-estimates the sink value of our forestry and land use sectors as being 27 TgCo2 per year, when it is actually nearly five times higher.

Top-down estimates of the CO2 contributed by continental OECD countries is not possible, although it has been suggested that other afforested countries like USA and Canada, and farm-based countries such as Ireland might also be net carbon sinks. On the figures available though, the top-down count demonstrates that New Zealand is clearly the most climate-friendly country in the developed world!

From the above it can be seen that New Zealand’s gross CO2 emissions per capita are lower than those of any of its major trading partners and below both the EU average and the OECD average. This is an impressive performance.

But the global effort to mitigate human-caused climate change is not about gross emissions. The Paris Agreement is unmistakably clear in seeking to “achieve a balance between anthropogenic emissions by sources and removals by sinks of greenhouse gases in the second half of this century”. Participants are required to focus on net emissions. Of the handful of developed countries which had lower 2014 per-capita gross emissions (Switzerland, Chile, Mexico, and Turkey), none of them have tree-planting projects to compare with New Zealand. It seems clear that, on a bottom-up count, we are the undisputed climate leader of the developed world!

For many years, the New Zealand media uncritically swallowed the Green activists’ spin that New Zealand had the “fourth highest per capita emissions” because of the enteric methane unavoidably produced by our ruminant livestock. This pervasive narrative has now been fully and finally exploded by the authoritative Oxford study, Allen et al (2018): “A solution to the misrepresentations of CO2-equivalent emissions of short-lived climate pollutants under ambitious mitigation”.

We now know that the translation of methane to CO2-equivalent was formerly exaggerated by a factor of at least four, so that the methane share of New Zealand’s annual greenhouse gas emissions reduces from 38% to about 9%. More importantly, the ‘cloud of methane’ decays as fast as it grows, so a steady state dairy herd (for example) adds no greenhouse warming at all.

The key solution is to minimise the herd’s methane outputs while maximising food production. The  climate champion produces so efficiently that it has the world’s lowest emissions per kilogram of dairy products. That champion is New Zealand whose dairy production is twice as climate-efficient as its nearest competitor (Ireland).

Almost all developed countries have targets to convert a certain percentage of national electricity supplies to renewable sources by a certain date. This is an extremely expensive way to contribute to the global effort, as can be seen in Australia whose power prices have gone from amongst the lowest to be amongst the highest in the world over less than two decades. The UK has had a similar experience.

New Zealand luxuriates in having superb natural hydro and geothermal resources. Over 80% of our supply is renewable, a fact which places us at number 3 in the developed world (after only Iceland and Norway).  Under this heading we are way ahead of all our trading partners.

A Ministry paper relating to our Paris Agreement Target suggested that inter-country comparisons might include (a) trade competitors; (b) countries in similar circumstances; or (c) some global average across all countries. As has been seen, I believe an average of OECD countries is more useful than a worldwide average.

The Treasury believes an “equal pain” indicator is most appropriate in gauging New Zealand’s “fair share” although acknowledging that it is difficult to measure and compare objectively. This is why I prefer the data-driven comparisons of per capita emissions.

MfE notes that the most cost-effective abatement available is often the purchase of international carbon offsets at the prevailing global carbon price. In my view, any government which chooses more expensive options is not entitled to any credit for the surplus pain it has volunteered to incur for its own selfish political reasons.

•    Our ETS covers more sectors and a wider range of long-lived gases that its European counterpart or any other national scheme. Its percentage of exempted industries is much lower.

•    The New Zealand ETS appears well constructed and has not experienced the series of scandals that have plagued the European scheme. It has not been sunk in fiery political controversy such as has occurred in Australia and is now occurring in Canada. Although it could be seen as a good precedent, comparable countries have not yet chosen to follow it.

•    Our taxes on petrol and diesel are amongst the highest in the OECD as is our current “carbon price booster” of $25 per tonne.

•    The UN director-general has praised this country’s “extraordinary leadership”, noting that New Zealand is “in the front lines”, at a time when the rest of the world is “not on track to achieve the objectives defined in the Paris Agreement, and political will seems to be fading”[1].

•    We have played a heavyweight role in climate change diplomacy, including proposing the non-legally-binding structure of the Paris Agreement and leading efforts to phase-out fossil fuel subsidies.  Similarly, we have led the international research effort in respect of agricultural gases.
“Ambition”

Our Paris Agreement NDC for 2030 is well below BAU and will obviously be a huge stretch. Professor David Frame, New Zealand’s leading climate scientist, has observed:

So, if we do not exceed the EU in ‘ambition’ are we leaders or losers? Professor Frame has done the numbers:

“Our 2005-2020 commitments have been roughly in line with what would have been expected of us if we had been a country within Europe, with the same per capita income we currently have.”


[1] This refers to the EU’s recent refusal to accept a “Zero by 2050” target, the USA pull-out from the Paris Agreement, and recent increases in coal-powered generation in China and India.

Barry Brill is a lawyer and former Minister of Energy, who Chairs the New Zealand Climate Science Coalition.