Mass shootings are becoming alarmingly common news fare. The USA leads the way in terms of sheer numbers but they have been on the increase elsewhere as well.

There are complicating factors when looking at this phenomenon. For one thing, a mass shooting is only one form of mass killing. Bombs, knives, axes and motor vehicles outshine guns as the preferred means of bumping off people in various countries, and comparisons based purely on incidents of mass shootings may be misleading.


For another, there are different contexts in which mass shootings occur – family blood feuds, rival gang shoot-outs, terrorist hit-squads, and lone killers opening up on people at random all present very different scenarios, and there is a strong case to be made for separating some of these categories out – terrorist attacks by trained operatives, for instance. But for now I’ll focus on all situations where guns are used to kill a number of people. 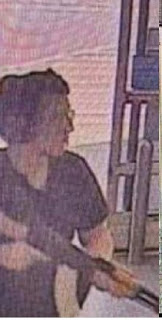 Mass killer Patrick Crusius earlier this year caught on CCTV. He is armed with a semi-automatic assault rifle – one that fires as rapidly as you can pull the trigger
Most ‘mass’ shootings actually involve numbers of fatalities in single digits, but there are notable exceptions (e.g. the Christchurch shootings earlier this year). Needless to say, fatalities are higher when automatic or semi-automatic weapons are involved.

These figures need to be adjusted for population sizes. I carried out a little number-crunching exercise in which I set the US rate as the benchmark. On the basis of that population-adjusted rate, Canada would be expected to have seen 24 mass shootings over that period; Australia, 16; and NZ, just 3. All three exceeded those expected frequencies – Canada by 8 (+33%), Australia by 10 (+63%), and NZ by 2 (+67%). Suddenly, the US doesn’t look too bad compared to the other three.

I hear someone saying, “There are three kinds of lies: lies, damned lies, and statistics" (attributed to Mark Twain, but some trace it to Disraeli). I entirely agree, and would add that this kind of sorcerer’s arithmetic using raw frequencies is rather wobbly from a statistical point of view, especially when dealing with very low tallies which may lead to gross exaggerations when extrapolated from. Still, this little exercise draws attention to the need to take population size into account when making inter-country comparisons. “Yet another mass shooting over in the US,” we think when so informed by the tele, “It happens all the time there, I’m so glad we’re safe here.” But if the US experienced the same rate of mass shootings as Australia and NZ, there would have been 350+ mass shootings there over the past 50 years – a lot more than there actually were.

Looking now at Europe, the UK (population about one and three quarters that of Canada) barely enters the picture with 3 mass shootings over the past 50 years (at the US rate, that should be 43;
–93%). Germany, with a population more than double that of Canada, comes in with just 9 (at the US rate, expected 54; –83%). The place I hail from, the Netherlands, with a population a bit under three-quarters of that of Australia, has seen only 2 (expect 11 at US rate; –82%). The picture emerging from other Western European countries is similar.

Clearly, there is a distinction to be made between the four ex-pioneering societies and the European countries from which those migrants were drawn: the former as a group have much higher rates of mass shootings relative to their populations.

The British have long been a gun-happy lot but they are no strangers to gun control either – James II disarmed English Protestants (the right to own firearms was restored to them in 1689). Firearm ownership tends to be tightly controlled in continental Europe, especially Western Europe.  Most Western Europeans do not regard guns as a normal household item. Very few Europeans today hunt. It is fine for the police to carry them, but that’s because some of the crims do. In the past, guns moreover tended to be associated with the landed gentry – they were the ones who hunted for sport and settled disputes through duelling. But guns were not part of popular culture and gun ownership was certainly not regarded as a right (with the arguable exception of the UK).

It was a very different story in the colonies. Settlers had to deal with indigenous peoples who didn’t take kindly to their lands being invaded, and banditry was rife. The rule of law was tenuous at best in areas well away from major population centres. Where there was no law, the gun became law. Solving problems with a gun was widely accepted as legitimate, even if the law proper didn’t quite see it that way (but all too often turned a blind eye – after all, that guy was cheating at cards or had jumped another man’s claim, so he deserved it). Being tooled up became ‘macho’ – guns enhanced the ‘he-man’ image of the pioneer. Gun-toting baddies who thumbed their noses at the authorities such as Ned Kelly were secretly admired by many people. Guns were an integral component of pioneer society culture, and time has not flushed them out of the psyche of later generations.

The right to carry firearms was largely taken for granted by the pioneers – in many instances, their lives depended on them. In the US, the right to bear arms was written into the Constitution (2nd Amendment, 1791):

A well regulated Militia, being necessary to the security of a free State, the right of the people to keep and bear Arms, shall not be infringed.

‘Arms’ in the context of the late 18th century refers to powder-and-ball firearms – muskets and pistols. To ‘bear (thesaurus entries include ‘carry’) arms’ moreover implies light hand-held weapons only – it does not extend to heavy weapons such as artillery pieces.

The musket had undergone considerable development during that century and was a fairly sophisticated weapon by the time the Second Amendment was written. A trained man could rattle off three rounds a minute if he had to do his own reloading. An emerging tactic was for soldiers to form rows which would rotate, the front row firing while the rows behind them reloaded. A common procedure used by settlers in North America was to form a defensive ring with the men on the outside and the women, kids and servants in the centre doing the reloading – there would be three or more muskets per man so the defenders could keep up a concentrated fire against any attackers. Used en masse in an orchestrated manner, the musket was thus a highly effective defensive weapon. What the Second Amendment comes down to in practical terms is that every man could carry a musket or two and a pistol or two for self-defence whether as an individual or as one of a collective.

I believe one of the keys to averting mass shootings is to qualify the right to bear arms (where recognised as such) by restricting this right to hand-held, single-shot weapons, in line with the spirit of the 1689 and 1791 declarations and the technology of the day that informed them. An automatic or semi-automatic rifle is a military weapon with a mostly offensive rather than defensive purpose (hence often called an ‘assault rifle’), and its availability should be restricted to members of the military and perhaps special armed police units. An ordinary citizen, even if an avid hunter, has no conceivable use for such a weapon – except as an instrument of mass murder.

Ultimately, though, it’s a matter of popular attitudes towards firearms in general. These have been changing over time, but it will probably take several more generations to eliminate the gun from the cultural mindset of ex-pioneering societies and see the figures for mass shootings come down to Western European levels.

For the record, I was a keen member of the Queensland Rifle Association while living there in the mid-1980s. I owned a 7.62mm Mauser 98 bolt-action rifle with O-Mark sights. My views on gun ownership have changed little, if at all, since that time: I was aghast when people could start buying assault rifles, and I still am.

NZCPR Newsletter: Questions Over Our Future

The outpouring of emotion over the death of Queen Elizabeth II came as a surprise to many. Hundreds of thousands of people lined the streets...