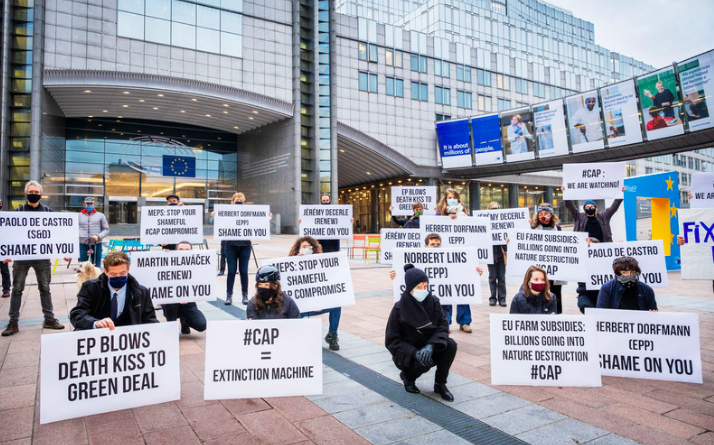 MEPs voted against proposals to cut subsidies for factory farming and to protect grasslands and peatlands – a major storage reservoir of greenhouse gases.One critic said the vote on the EU agriculture reform package would bring extinction closer for many species after it failed to offer incentives for farmers to reduce their environmental impact.  BirdLife Europe said the politicians voted to make the policy “an extinction machine”, adding: “Nature has lost this battle.”Now environmentalists are pressuring MEPs before a final vote by the full parliament tomorrow (Friday). The votes on the Common Agricultural Policy (CAP), funded by nearly €400bn (£350bn), will shape farming in the block for the next seven years. A deal by the largest groups in the European Parliament – the European People’s Party (EPP), Socialists & Democrats (S&D) and Renew Europe – involved lowering environmental conditions attached to the policy. And MEPs voted against an emissions-reduction target for agriculture of 30 per cent. […] Earlier this year, 3,600 scientists called for an overhaul of the CAP, warning that it was a central driver of the biodiversity and climate emergencies as it funded practices that cause significant biodiversity loss, climate change, and soil, land and water degradation. The new CAP document deletes “the need for farmers to have a tool for more sustainable use of nutrients”, Ms Bradley said, pointing out that agriculture is the biggest source of nitrate pollution in EU waters, responsible for dead zones and toxic algae. Full story 2) Current EU plans for farming subsidies won't achieve any CO2 emission cuts – NGOClean Energy Wire, 12 October 2020If the European Union doesn't include stricter rules for climate friendly farming in its main subsidy scheme (CAP), the farming sector will not achieve any emission reductions in the next ten years, a new report finds.Measures under the European Union’s subsidy scheme for farmers (Common Agriculture Policy - CAP) are not contributing to the reduction of greenhouse gases, and could even see them increase again, a report by the Institute for Applied Ecology (Öko-Institut) commissioned by NGO Germanwatch has found.The next CAP funding period will run from 2021 to 2027 and, as part of its Green Deal policy, the EU Commission has pledged that 40 percent of direct payments to farmers under the CAP would be used towards climate action. However, these 35 billion euros would be paid to farmers without any emissions being alleviated in return, Germanwatch warns. Under the so-called enhanced Conditionality part of the CAP, the paid income support (and other area- and animal-based payments) should be linked to environment- and climate-friendly farming practices and standards. But according to calculations by the Öko-Institut, adhering to these best practices (Good Agricultural and Environmental Conditions – GAECs), including permanent pastures, preservation of carbon rich soils such as peatlands and wetlands, and soil protection and crop rotation, will at best maintain the status quo of emissions from the sector. In this case, while possibly pursuing a more ambitious climate target of a 55 percent greenhouse gas reduction by 2030, the EU’s emissions from agriculture would not fall and make up 20 percent of total emissions in ten years' time. Full post3) Virtue signalling exposed: U.S. cities failing to meet lofty climate goalsScience Magazin, 22 October 2020 Most major U.S. cities that have signed on to the climate fight with pledges to cut greenhouse gas emissions are failing to meet their goals or haven't even started to track local progress, according to a survey by the Brookings Institution. 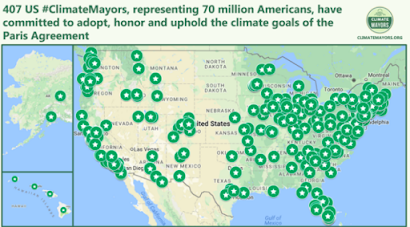 The report, "Pledges and Progress," looked for climate policy and actions in the nation's 100 most populous cities, finding that two-thirds have made commitments to address citywide emissions. 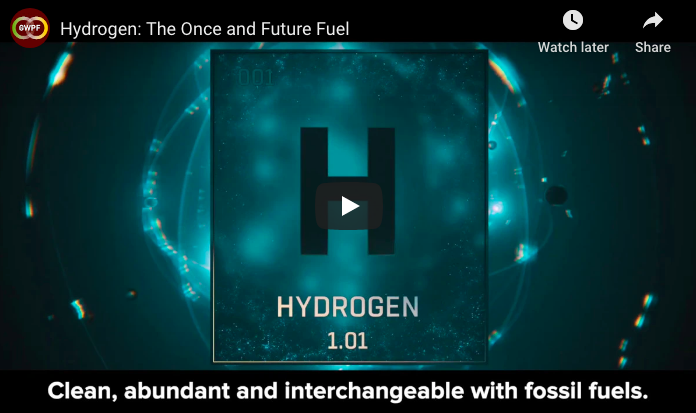 Writing in The Spectator, Andrew Montford, deputy director of the Global Warming Policy Foundation think tank, said the attractions of hydrogen were “mostly a case of pulling the wool over the eyes of the unwary”. “Hydrogen is a way of moving energy about, it is not a source of energy itself. In other words, to make the stuff you need a real source of energy, which currently means natural gas.” The production of so-called ‘blue’ hydrogen from natural gas uses a process known as steam methane reforming.“If you are going to burn gas to make hydrogen you are going to get carbon dioxide given off in vast quantities and so you need operational carbon capture equipment,” said Montford.  “Unfortunately, carbon capture and storage has only ever worked for coal-fired power stations and even then it’s commercially unviable. Getting the technology to work on plant-burning natural gas remains a pipe dream.”So-called ‘green’ hydrogen is produced by electrolysing water using renewable electricity, such as from wind farms.Montford said producing hydrogen this way was expensive. “Converting electricity to hydrogen and back to electricity is grossly inefficient. Even with rather cheap power input you still will not get cheap electricity out at the end of the process. “We know for certain that the UK’s offshore wind fleet is not going to deliver cheap power anytime soon. Two separate reviews of the accounts of the UK offshore wind fleet have shown that costs have been rising for the last ten years. “In other words, we are going to take very expensive electricity from offshore windfarms, use it to make hydrogen, which we will burn to make electricity again.”Full post 8) And finally: Following China’s lead, Dubai builds new coal power plant despite 2050 climate promisesAssociated Press, 22 October 2020The construction of the $3.4 billion Hassyan plant in Dubai appears puzzling, as the United Arab Emirates hosts the headquarters of the International Renewable Energy Agency. 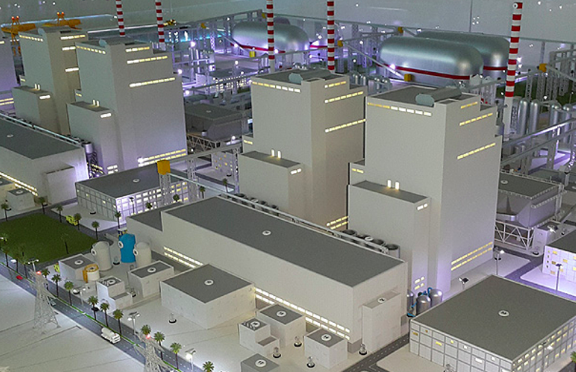 The 2,400MW Hassyan clean coal power station is an ultra-supercritical (USC) power plant being build by China in Dubai, United Arab Emirates. It’s also building the peninsula’s first nuclear power plant and endlessly promotes its vast solar-power plant named after Dubai’s ruler. Dubai has also set the lofty goal of having the world’s lowest carbon footprint in the world by 2050 — something that would be impacted by burning coal.The coal plant’s arrival comes as Gulf Arab nations remain among the world’s hungriest for energy and amid political concerns over the use of natural gas imported from abroad, concerns underscored by a yearslong dispute with gas-producer Qatar, which is boycotted by four Arab nations, including the UAE.“Dubai was really saying we’re far too exposed on gas imports, those could be interrupted by all kinds of things, the cost is very high and so we have to do something else to diversify our fuel supply and bring down the total cost,” said Robin Mills, the CEO of Qamar Energy, a Dubai-based consulting company. “They got a very competitive offer on the coal plant … and so the decision was made.” The Hassyan power plant is being built in part by China, which describes the plant as a “major engineering project of the Belt and Road Initiative,” a project which seeks to expand its influence in Africa and Asia. China anticipates that the plant, which has General Electric Co. involved in its construction, will meet 20% of Dubai’s electrical demand. Full story