Lindsay Mitchell: Is WINZ toughening up?

According to the NZ Herald people are being bumped off the invalid's benefit and onto a sickness benefit ahead of the new rule changes. The health advisers involved are not a new appointment though. It may be that after the release of last year's auditor general's report, which found a lack of progress in the application of Labour's changes, they have stepped up activity.

The story may also be the result of Rotorua beneficiary advocate and activist, Paul Blair, getting busy again. Paul Blair has previously taken the Ministry of Social Development to court in order to secure a rule change that allowed single parents to split the custody of their children, both go on the DPB and avoid work-testing.

So what do statistics show? The March quarter statistics are not out yet. But those up to December 2009 show an increase in both benefits. Within that picture it is entirely possible more people than usual are being transferred from IB to SB hence the steep rise on SB. But the inflow onto IB is still greater than the outflow. 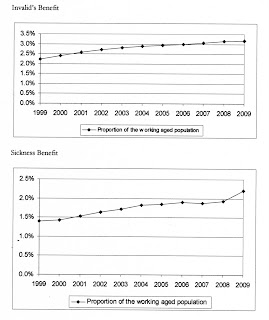 These graphs show that around 55 working-age people out of 1,000 rely on a sickness or invalid's benefit. This compares to 24 in 1991. Putting someone on a shorter term, lower paying benefit might provide the encouragement they need to look for a different or supplemental source of income.