Phil McDermott: Rethink the Link ...should Auckland pour money into a hole in the ground

Anchoring the CBD, or Sinking it?
A cornerstone of the Draft Auckland Plan is implementing an underground inner city rail link.  At an estimated $2.3bn this is the single most expensive new commitment in the plan, and accounts for around 15% of capital spending identified. This seems a big price to pay to transform what is already a perfectly functional CBD with adequate and improving public transport (PT) arrangements. And unless it makes a substantial difference, it could become a major fiscal anchor on Auckland’s development.  This posting considers the prospects.


Why?
So why do we need the inner city rail link?
The plan says:
·     It will contribute to “a transformational shift towards greater use of public transport”, reducing congestion “that has become increasingly intolerable” (p27)
·    It will improve the timeliness of public transport for inner city workers and by improving access to the CBD “catalyse related urban and business development and growth” (p35).  Oddly enough, the Plan also states that “existing rail and motorway connections to the city centre make it highly accessible and an efficient location for business” (p127).
·     It will support an additional 55,000 to 70,000 jobs projected for the CBD.  In a hint of circularity, 5,000 of these are attributed to the rail link itself (p165).
The Background Document, Towards Preferred Urban Form, says:
·    The link will raise service levels across the network, cut travel time on the western line by 10 minutes or more, and create a higher “accessibility profile” for CBD fringe areas (p25).
The Business Case
I looked at the business case supporting the rail link, but struggled with it.  For a start, while it claims to consider alternatives, it departs from convention by looking only at different transport responses to fixed assumptions about land use.  Normally, transport evaluation for urban development starts with land use options, and considers their differing transport needs to decide which combination is favoured economically.  It also considers differing land uses so it can highlight the social and environmental tradeoffs being made. It might then vary the best options further to take into account fiscal risk.
Rather than go into the detail of the business case here I concentrate on whether building the City Rail Link the best way to reduce congestion.
Commuting - the Data
To get some idea of this I looked at the distribution of commuting trips across Auckland.  I first divided the city into five sectors:
–    The North, locations north of the Waitemata Harbour and dependent mainly on the Harbour Bridge for access to the CBD and points south, including the rest of the Auckland Isthmus;
–    The West, former Waitakere City, mainly dependent on the Western Motorway for access to the CBD and points south;
–    The CBD, as defined by the plan to cover areas within the motorway ring (Auckland Central East and West and Harbourside), but extended for this exercise to include fringe areas likely to be impacted by the rail link (Freemans Bay, Newton, Grafton East and West);
–    The balance of the Auckland Isthmus, through to Panmure in the southeast; and
–    The South, the former Manukau, Papakura and Franklin council areas, and Waikato Region
An origin-destination matrix of work trip was sourced from Statistics New Zealand for the 2006 Census at Area Unit level.  Motorised trips were divided between those using private vehicles (company or individual owned) and those involving bus or rail [1] and allocated among the five sectors.  Pedestrian and bicycle trips were set aside as they are mainly local.
(The source data rounds small numbers for confidentiality reasons. This means flows between areas with few trips are slightly exaggerated or under-counted, although this should not affect this general analysis.  [2])
Getting to the nub – getting past the CBD
Let’s compare trip numbers to the CBD with those bypassing it:
–    14% of trips originating in the North are destined for the CBD.  But 19% go past to points south. (62% remain within the north);
–    15% of trips originating in the West end up in the CBD, but 37% end up elsewhere on the Isthmus or further south (not all of these need go near the CBD, though).  Only 38% of trips originating in the West terminate in the West - a low level of employment self-sufficiency.
–    Only 32% of trips originating in the CBD terminate there; 53% go elsewhere on the Isthmus or and further south;
–    64% of trips originating in the South end up in the South, just 7% are destined for the CBD, 26% for other parts of the Isthmus, and 3% for the North or West.
Origins (Place of Residence) and Destinations (Workplace)
Auckland Journey to Work, 2006 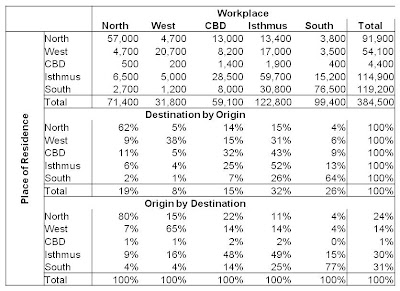 Source: Census of Population 2006, Statistics new Zealand
Around 21,000 trips a day from the West and the North of the region went to the CBD in 2006.  But 38,000 had to get past it (although some from the west would have gone near it at all).
Significantly fewer north- or west-bound trips indicate more limited employment opportunities in those areas.  But there were still 15,000 from south of the CBD to the north or west.
So, 54,000 trips went past the CBD, nearly as many as destined for it (58,000). And 127,000 went to other parts of the Isthmus.  While the CBD is the largest single destination (around 14% of the city’s total jobs using our definition) the real congestion issue is how to cater for – or reduce -- cross-city commuting, and especially north-south trips that must use the motorway system to drive round it.
Is pouring money into a CBD-rail link really the answer?
Will the proposed city rail link meet the Plan's expectations?  No.  Not just because it does not address cross-city congestion.  But also because in 2006 30% of trips from elsewhere on the Isthmus into the CBD already used PT. In some nearby Isthmus areas the figure was much higher e.g., 50% for Mt Eden North, 40% Newmarket, 42% Sandringham, 41% Newmarket, and 40% Surrey Crescent. And a substantial 26% of commuters from the North and 27% from the South to the CBD also used PT in 2006.  (These figures do not include ferries, which accounted for 7% of PT boardings in the year ending October 2011 – all to the CBD).
And this penetration will have grown with expanding PT patronage.  Look at the past few years: 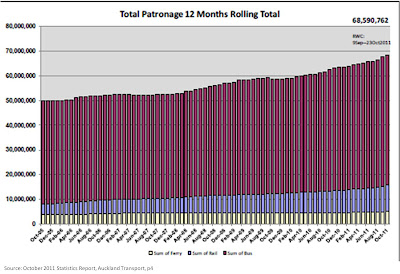 Phil is a consultant in urban, economic and community development. He blogs at Cities Matter.


FOOTNOTES:
[1]       Travel by ferry comprises only a very small share of the total and is not identified in the statistics
[2]     Comparing the sum of trips across cells compared with the overall figures provided by Statistics New Zealand suggests that this leads to between a deviation of 5% undercounting (for car based trips) and 7% undercounting (for public transport-based trips).  This is acceptable for the level of generalisation dealt with here