Lindsay Mitchell: Getting to grips with 'child poverty'

A recently-released Ministerial Committee on Poverty report  contains information familiar to me but presented in new and revealing ways. For instance, the chart below shows that of the 270,000 children deemed to be living  'in poverty' (i.e. in households below 60 percent of the median equivalised after housing costs) more than half are not experiencing hardship. That's because income is arguably less important than outgoings, or budgetary prioritising:


The report is very encouraging in that it identifies children of beneficiaries and particularly sole parent beneficiaries as forming the majority of children at risk of deprivation, but it resists leftist solutions. It finds for more targeting (of services for example), not universalising payments (no child benefit as proposed by the Children's Commissioner), and is clear that getting sole parents into work, or increasing their hours, is the best strategy for lifting incomes. It notes that in Nordic economies parents are expected to return to work when their child is 13 months old.

It also makes mention of the need not to disincentivise work (or encourage fertility patterns that are not in the nest interests of children) with higher benefit payments.

Another graph shows how many children spend x number of years on a benefit, more  focus on the major reason for persistent child poverty.

Again this type of information has long been available, but depicted this way is far more accessible. Immediately we can see that over a 14 year period around 200,000 children will spend between 7 and 14 years reliant on a benefit. Just over half will spend some time on a main benefit (Domestic Purposes, Sickness, Invalid and Unemployment Benefits): 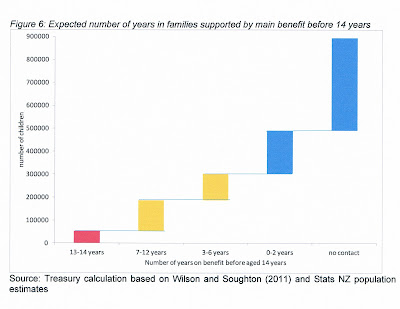 I'd suggest that under a Labour government we would never have seen this type of analysis at a ministerial level. While there is a lot more National could do to reform welfare, at least they are getting to grips with the role long-term benefit dependence is playing in the problem - 'child poverty' - that Labour and the Greens are hell-bent on politicising to their advantage.

If you want to understand the issue better, you could do worse than read this report.