Phil McDermott: Just Another Stake in the Sand - Planning, Demographics, and Uncertainty

Another million or another myth?


The Mayor, Len Brown, reiterated the Council view that Auckland is facing an increase of around one million people over the next 30 years, and that planning for this level of growth is the prudent thing to do.  I cannot be so sure.
The Mayor is pretty bullish about growth, though.  He even claimed that “our actual rate of population growth has been well above the highest projection” since 1999.

That doesn’t quite match the evidence. The actual population in 2011 was well below the high projections contained in various Statistics New Zealand projections and revisions since 2002. These include the one it prepared for the Auckland Regional Council in 2009 which suggested that under high growth assumptions Auckland could have another million people by 2051, forty years out.
So how safe is a bet on another million in thirty years?  And incidentally, what do ratepayers and residents stand to lose from over-the-top plans and investment in infrastructure beyond what is needed if that growth doesn’t occur? Surely addressing the risks and the cost of getting it wrong is what would be really prudent.
So what do the numbers really tell us?
We can acknowledge that Auckland’s growth has exceeded Statistics New Zealand's medium projections. Perhaps more interesting, as these were updated through the decade, the medium projections became progressively more accurate (helped, of course, by the 2006 Census). This confirms that the longer the projection period, the greater the uncertainty, and the greater the risk of getting it wrong.


I draw two conclusions. First the magic million is highly arbitrary.
Second, we need to address the inevitable uncertainty around long-term projections and develop plans that can cope with the risk that what we plan is not what we get, or takes a lot longer than we think it will.


This uncertainty is not news. The 2009 ARC projections show a significant spread. The medium one is for growth 36% lower than the high projection.  The low projection is 52% below the high.  Incidentally, in 2011 (two years after the projections were prepared) we were already tracking on the low line. 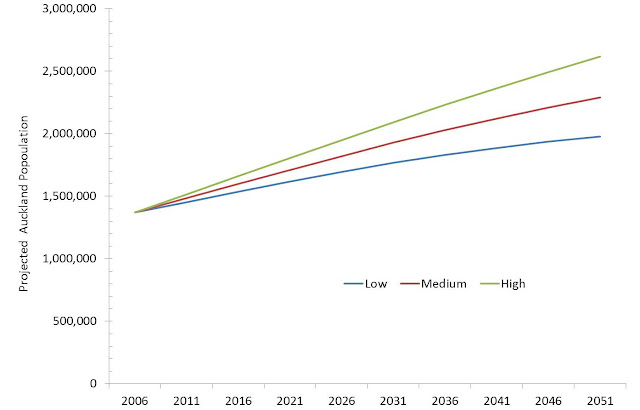 
And if we were to stay with the Statistics New Zealand recommendation that planning should be based on the medium projection, we would be planning for another 800,000 people over 40 years rather than one million over 30.
Digging beneath the lines on the chart
I don’t know what the long-term future holds for Auckland and Aucklanders. No one does. However, it’s worth considering the possibilities by exploring the assumptions behind the projections. This will give us some idea of the growth drivers we need to plan for (or perhaps against).  These include assumed mortality fertility, and migration rates.


The focus here is on migration, but acknowledging that if gains from overseas continue to contribute substantially to Auckland’s growth they will also impact on mortality and fertility because of the different ages of people moving in and out of the city.


Migration: the great unknown
Although net gains from overseas are lower than Auckland’s natural increase (which is the annual excess of births over deaths), they are key drivers of population growth. Over the last twenty years net migration accounted for 30% of growth, a share ranging from 15% between 1996 and 2001 to 42% between 2001 and 2006 (and back to 30% since).

The high population projection on which the council is placing so much store depends on substantially higher migration gains than we have sustained in the past. It’s a little difficult to envisage the conditions under which this might happen, yet it is the basis for projecting population growth of one million by 2051 (or is that 2041?), and hence an important prop for the Unitary Plan.


Getting past the numbers
Statistics New Zealand terms its projections “scenarios” and (wisely) not forecasts.   So what are some of the things that might influence the migration scenarios towards the higher or lower assumptions?


In fact, there are good reasons to favour lower rather than higher migration gains. For a start, a booming Asia over the coming decades should create competitive demand for skilled people, and could supplement Australia by increasing attractive opportunities for young New Zealanders.
And an ageing and more prosperous Asian population will lower the supply of working immigrants – and increase competition for them from Australia, Canada, the US, and, increasingly, Asian countries.
Beyond that, poor housing affordability and the ambition (encapsulated in the Auckland Plan and its handmaiden, the draft Unitary Plan) of transforming Auckland from a unique South Pacific city into something resembling Vancouver, or Hong Kong, or London, or Melbourne, or Paris (exemplars cited by the Mayor and his advisers, not by me) are likely to lower Auckland’s attraction.  Somewhat perversely, the planned transformation to a higher city may also encourage older households to move out if the recent groundswell of concern is anything to go by.
Auckland –engine or anchor?
These possibilities highlight another feature of the projections.  They imply that Auckland will dominate national growth in a way that stretches recent history. While there is no denying Auckland’s primacy, there are threats to this and no reason to assume that city will – or should -- take up an ever-increasing share of New Zealand’s population growth.  .
For a start, issues around the availability and price of dwellings need to be resolved if a much larger population is to be housed.  Congestion, crowding, and associated pollution issues need to be dealt with, particularly if the Unitary Plan’s particular  penchant for lifting densities carries the day. And with little more than lip service paid to the needs of business, the Plan might make it just that much harder to do invest – or get a job -- in Auckland.  The difficulty imposed by a tight housing market might also make it difficult (and expensive) to attract and retain the right labour, so there is no guarantee that Auckland will dominate economic growth in the long-term..


The only way for Auckland to lift its long-term share of growth is to resolve housing problems speedily, and open up the opportunities for investing through a Unitary Plan that provides for expansive employment as well as housing.
In any case, growth may need to be more widely distributed within the country as a whole, if only to support our principle source of wealth, the primary and associated sectors.


A solution in search of a problem
The million person myth looks rather like it is being employed to support the Unitary Plan, rather than the other way round.  The planners have for searched for reasons to consolidate Auckland for well over twenty years now.  Well, so far this one’s no more convincing than the reasons that went before.  (And I suspect that a rushed job on the economic rationale for the plan will be no more convincing).


Numbers are important – but they are never definitive.  Projections are useful for what they tell us about the drivers of change as we understand them at the time we compile them. But they should be the starting point for discussion, debate, and policy development – not the end point.
Planning is not about tracking a line (or even lines) on graph.  It is about identifying community needs and preferences, and responding to them in a way which enables citizens to get on with their lives without undue impact on the environment, or each other.  Right now, that does not seem to be the way the Council is tracking.

No matter what the population rate gain is, Auckland needs the commencement of the City Rail Link now, ahead of expenditure on any of the Roads of National Significance for which construction has not yet commenced.

I do not agree, W.Sanderson.
I doubt whether more than 10% of the greater Auckland area residents will ever use the proposed City Rail Link, or benefit from the supposed improvements it will bring to the suburban lines. In contrast, every single one of us will benefit either directly or indirectly from roading improvements. Do them both if we can, but if not we should forget about the rail link.

Being from Dunedin, we hear how the new rail link in Auckland will benefit us all in NZ. What I want to know is how a rail loop in Auckland can benefit us here in Dunedin. Sounds loopy to me.