New research from the Child Poverty Action Group, who are campaigning to increase benefit levels, finds there is,


"no evidence of an association between benefit receipt and distinct substantiated rates of child abuse."

And later under 'Conclusion', "...benefit income does not appear to be related to rates of child abuse."

How did they arrive at this?

Here's a cut and paste of the entire relevant text and scan of their scatterplot:

Benefit data is held by the Ministry of Social Development. We have assumed WINZ offices cover broadly the same areas as CYF site offices as MSD appears to know what percent of the population is on a benefit (see for example Collins, 2013) so would use the same or similar population estimates they use for CYF purposes. Here, data for the four main income-tested benefits has been combined since not all the jobless go on an unemployment benefit nor is it only DPB recipients who care for children (similarly, not all DPB recipients care for children, although most do). Benefit figures are from June 2012 so are for a point in time only: the numbers can easily change if the dynamics of people moving on and off benefits changes. The percentage of beneficiaries in the population was plotted against the rate of substantiated distinct abuse cases in each site office. If there was a relationship we would expect to see rates of substantiated abuse rise as the proportion of working-age beneficiaries rose. This relationship is statistically insignificant, with the R 2  value being 0.39. The values for each site office are in the Appendix at Table 6. 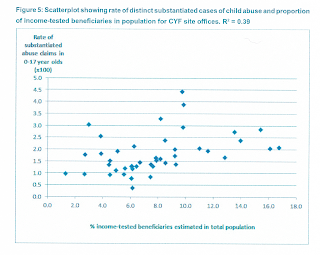 I have one major problem with this chart. It uses benefit dependency rates across all benefits. Most people on a working-age benefit are not caring for children (58% 2012). Most children dependent on a benefit rely on the DPB (78% 2012). What would the chart look like if the relevant population was plotted?

This strongly suggests that most would appear on the DPB. Consider this graph from the Children's Social Health Monitor:

Anyway, CPAG took exception to the Auckland University in their first report saying,


"It suggests child maltreatment is a function of membership of particular social groups, something for which the evidence is very weak."

And here it is.

Whose research is more robust? The University of Auckland or the Child Poverty Action Group's?