Never mind about the economy, the environment, ISIS or the ZIKA virus. There are far more pressing issues facing Western law-makers. Such as where transsexuals – Arthurs who parade as Marthas, and Marthas who parade as Arthurs (‘trannies’ for short) – can go and relieve themselves when their bladders catch up with them in public places.

I’m not joking. It’s a huge issue in the US. Some states have legislated for trannies being able to use bathroom/toilet facilities in accordance with the sex they ‘identify with’. Schools are under pressure to allow supposedly transsexual kids to use toilets/changing room facilities according to the sex they think they are.

On the other hand, North Carolina is in deep trouble with the federal authorities for having passed a law that says trannies must use public ‘restrooms’ that correspond to their birth sex. Pop stars have cancelled visits to the state in protest. Hey, this is serious stuff, folks.

Requiring trannies to go and do a leak (or change, or whatever) in a public convenience consistent with their birth sex is somewhat impracticable as few people carry their birth certificates around with them, and there are even fewer security guards stopping people who want to use public conveniences and demanding documentary proof of their sex. 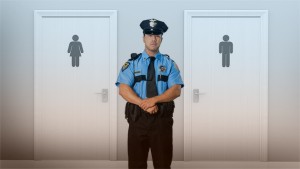 Let’s look at the technicalities invoked by this vexing issue. There are two kinds of trannies: M-to-F and F-to-M. Some go part of the way and some go the whole hog (i.e. as good a simulation as hormonal and surgical techniques and, in the case of F-to-M, a bit of inflatable gadgetry will enable). So what we have in practice is a more, or less, self-evident tranny walking into a public convenience. What then?

In the case of most F-to-Ms walking into a men’s facility, nothing. The guys there probably won’t even notice that the newcomer isn’t actually a dinkum bloke. If s/he’s there to relieve him/herself, s/he’ll almost certainly go into a toilet cubicle rather than grappling with the ultimate F-to-M tranny challenge of trying to use a urinal without making a mess. Plenty of blokes go into those cubicles, so this would not raise any eyebrows. A couple of minutes later, s/he exits the cubicle and saunters out of the facility. No drama there.

It is the M-to-F tranny using a women’s convenience scenario that may be problematic. Some trannies are very convincing indeed with respect to their appearance, but mostly the deception doesn’t survive a second look – especially not a female look, women apparently being better than men at sussing trannies. You can bet your bottom dollar that s/he is going to be sussed within seconds of entering. Reactions will vary from nudges and winks to frenzied demands for the tranny to git. One could be forgiven for asking what the fuss, if any,  is about – s/he will likely just go into a cubicle and close the door like any woman using the facility. If s/he feels s/he really is a woman, s/he won’t do anything silly like exposing him/herself to other women there (assuming s/he still has male bits, which most do). So again, s/he’ll just do what s/he came in to do, and leave. What’s the big deal?

The fear that some women have expressed is that of male sexual predators decked out as trannies entering public facilities with a view to causing mischief. This could range from voyeurism all the way to sexual assault and rape. But most ‘hetero’ blokes do not contemplate donning female apparel for any reason – it would be an act of self-emasculation in their view (and they’d be worried sick about any of the boys at the pub chancing upon them en route). There are sicko types out there who might consider dressing up as women to gain entry to a women’s facility, but what a load of rigmarole when there’s plenty of simpler ways to effect a sex attack. The evidence thus far is that fears of a wave of attacks by marauding lipstick-rapists in skirts have not been realised in places that have supposedly left themselves wide open to it.

Now let’s apply the North Carolina law. There are caveats. If you are an F-to-M tranny, you’d better not go into a women’s facility, especially not if you are a convincing one – some of the women there may mistake you for a man and go into a tizzy. At the very least, you can expect some ‘verballing’ from the ones who recognise you for what you are. If you are an M-to-F tranny, definitely don’t go into a men’s facility. It may not stop at wolf-whistles and foul-mouthing, especially if there’s uncouth types in there or guys who have had a tipple or three.

Trannies have been around for quite a while. How have we been coping until now? A bit of common sense covers most situations fairly well. If you look like a bloke, you can safely use men’s facilities but keep a low profile. If you are a bloke trying to look like a sheila, you need to be very circumspect about using women’s facilities – hold a hanky up to your face or go in with a female friend flanking you so the real sheilas in there don’t suss you. It’s amazing how useful a loose-fitting raincoat, or obfuscating headgear, can be in such circumstances too. Use your noggin! We don’t really, honestly, truly need laws about this one way or the other, do we?

Trouble is, this hogwash is a harbinger of what TIME magazine has called “America’s next civil rights frontier”. Be assured that it’s not only America’s. I am reliably informed that this is becoming an issue in NZ as well (including a school introducing loo facilities for a 6-year-old tranny…… um, excuse me?!?!) 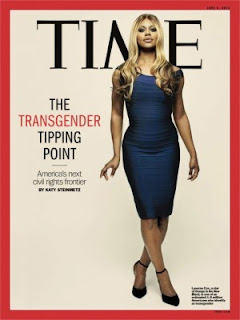 For those of you wondering “What next?” after amending the Marriage Act to enable two jokers or two sheilas to ‘marry’, there’s your answer. Not that the connection is as obvious as it may appear to some people. Many trannies do not regard themselves as homosexual – quite on the contrary, those who have gone all the way are often adamant about being heterosexual (after changing their sex, that is). The new wisdom is that gender/sex is a matter of how or what one feels – what one ‘identifies with’ – as opposed to the old ‘biological determinism’ of X and Y chromosomes. We are all a combination of Arthur and Martha, we are told, and fit somewhere on a spectrum as opposed to being pigeon-holable as M or F. Our position on that continuum is moreover not fixed and may change over time or even from one day to the next. Trannies who don’t go the whole hog can engage in ‘gender fluidity’ as the mood strikes them.

The gender-bender lobby seems to have hit upon a winning strategy: claim a sexual abnormality as a ‘right’ and make it an issue of ‘discrimination’ when society doesn’t bend over backwards to accommodate it (and vilify people who continue to call it an abnormality as bigots). The issue is thus forced into the legal arena and law-makers are coerced into passing legislation which normalises that aberration (and silences opposition through threats of applying ‘discrimination’ or ‘hate speech’ law).

This is what happened with same-sex marriage and now it’s happening with transsexuals clamouring for their conjured-up ‘rights’.

I don’t play ‘heads, you win; tails, I lose’ games. Hence I won’t support either legislation which insists that trannies use ablutions facilities consistent with their birth sex, or legislation that they can avail themselves of those facilities that match the sex they ‘identify with’. Turning it into a legal issue simply hands the social engineering crowd yet another victory on a silver platter, and that is the last thing I want to do. 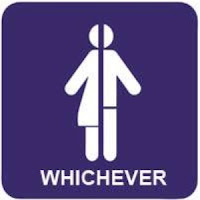 Barend Vlaardingerbroek BA, BSc, BEdSt, PGDipLaws, MAppSc, PhD is at the American University of Beirut and is a regular commentator on social and political issues. Feedback welcome at bv00@aub.edu.lb

This is something the pollies relish - piddling about with totally unimportant litigation while they leave essential problems in the too hard to do basket. They THINK it gives the impression that they are busilly doing something - but we can see perfectly well that they are a waste of time, space and money.
Aunty Podes

In Thailand you go into the men’s toilets where the girls are operating full time as cleaners.
They say to me ‘ oh look you’re MmFM, that’s interesting, a good tip is 20 baht”
Not so fast I say, did you ever support the corrupt Thaksin regime.
“ God no not me” she says , so I give her a 50 baht tip, toilets are girls work here, and the place was very tidy..