Operation Regime Change (as I’ll call it) achieved some of its objectives, particularly the elimination of Saddam Hussein and Muamar Ghadaffi, but has been an unmitigated disaster for the MENA region and for the world at large.

It gave us ISIS in Iraq and Syria, and the disintegration of Libya resulted in a country that now exists only as lines on a map and is about to become a staging post for ISIS metastases as well as being a springboard for illegal mass migration into Europe.


But some people are slow learners. Last month, 51 warmongers in the US State Dept signed a petition calling for the commencement of US air strikes on Syrian government positions as a means of aiding ‘friendly’ rebels to achieve their objective of toppling the regime in Damascus.

Bashar al-Assad: still in the sights of Operation Regime Change

The prospect of Syria being taken down the same road as Libya is the stuff of nightmares. ISIS, currently on the back foot, would be able to breathe much easier in the near-certainty of being able to hold onto Raqqa, the loss of which would be catastrophic for them as it would throw their end-game strategy into disarray. Iraq would have to deal with an ongoing insurgency fuelled from across the order, while Lebanon and Jordan, to name just two countries in the region, would come under direct threat.

And yet there are obviously those who want to press on with Operation Regime Change and remove Bashar al-Assad whatever the consequences.

Propaganda played a large part in Operation Regime Change. Contrary to popular usage, the term ‘propaganda’ does not necessarily connote that someone is telling fibs. Some very crude propaganda does indeed consist solely of falsehoods – the outrageous lie about Saddam Hussein’s so-called WMDs, for instance. But propaganda as a genre is about the way a story is told; it’s about spin rather than substance.

The propaganda war against al-Assad continues to focus on what a bad fellow he is. As part of this campaign, we are constantly reminded how al-Assad is “killing his own people” through the use of, amongst other things, ordnances such as barrel bombs that kill ‘indiscriminately’.

UN Security Council Resolution 2139 (2014) demanded "that all parties immediately cease all attacks against civilians, as well as the indiscriminate employment of weapons in populated areas, including shelling and aerial bombardment, such as the use of barrel bombs, and methods of warfare which are of a nature to cause superfluous injury or unnecessary suffering”.

“All attacks against civilians” refers to deliberately targeting civilians – it does not prohibit attacks on areas where civilians may be present, providing there is a clear military objective and the use of force is ‘proportionate’ to the achievement of that objective, i.e. it does not “cause superfluous injury or unnecessary suffering”. But these are moot points when dealing with a foe who is entrenched in civilian areas and uses those civilians as human shields.

The singling out of barrel bombs – ordnances used in the past by, amongst others, the US and Israel – is enigmatic. Barrel bombs are crude devices, but they are dropped from helicopters onto narrowly-defined target areas. That makes them precision weapons compared with conventional artillery, and thereby surely less ‘indiscriminate’. 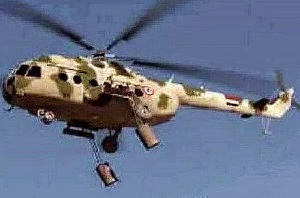 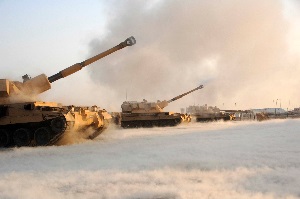 Which is more ‘indiscriminate’ in its effects? I say the second of the above.

As for “killing his own people”, if a government is facing an insurrection (whether in cahoots with external entities or not), it is fully within its rights to “kill its own people”. I wonder how many qualms Washington would have about killing traitorous Americans should there be an insurgency in one of the states of the union.

Propagandists tend to ignore positive aspects of the target of their efforts, whom they are after all intent on vilifying. One important and largely glossed-over aspect of the Syrian social order under the al-Assad regime is its inclusiveness with regard to religious communities. This includes Christians, who have been targeted by ISIS and some other extremist groups for extermination. Horrendous accounts of Christians being butchered en masse by various methods including crucifixion and burning alive abound, and there is little reason to doubt their veracity. Syrian Christians overwhelmingly support the al-Assad regime as that is what stands between them and what has been rightly labelled as the ‘Christian genocide’. 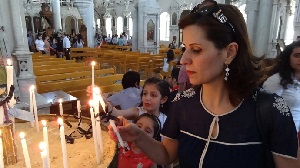 Syria is home to various vibrant Christian communities. Without al-Assad, this church would likely have been razed to the ground and few if any of these people would still be around – except for the little girls, perhaps…

The bottom line is, of course, that al-Assad has made an ass of US Middle East regime change policy. He is not only still very much in place – he humiliated them by completely sidelining the West through an alliance with Moscow which saw several months of highly effective aerial bombardment of all his opponents while all the West could do was look on and foam at the mouth.

I think what we will see over the coming couple of years is the US and its lapdogs on the one hand, and [continental] Europe on the other, going their own ways with regard to the MENA region. The Europeans are, on the whole, now decidedly unenthusiastic about overthrowing Bashar al-Assad, and increasingly inclined towards mending relations with Damascus. Let the Americans pursue their vendettas without the complicity of other Western countries while the rest us make our own arrangements with people the Yanks have the pip with for not kowtowing to them.

It is easy to be wise in hindsight. The Americans and many others thought that if Saddam was overthrown that the Iraqis would develop into a democratic country like Japan did are WW2. Many have now learned that the Moslem religion and way of life is not consistent with democracy.

An excellent analysis of the situation in Syria.
Not only has the Assad government tolerated Christians it was one of the few countries to welcome in the Armenians or what was left of them after the old Ottoman empire and now Turkey got through with them during and after 1915.

Bashar al Assad's father Hafez since taking power in a coup d'etat in 1970 had good reason to form a coalition of many religious minorities -Shia, Druze, Yezidis, Christians and Alawites, he himself being an Alawite and regarded by the orthodox Sunni Muslims as heretical and disparagingly referred to as Nusayris (or Little Christians) as these were the people who could help keep him in power by counterbalancing the weight of the Sunni majority.

Now the Neocons who weld immense influence in the US are hell bent of upsetting this fragile balance that had enabled Syria to function as a country, and facilitating by supporting a range of Sunni militias, all the hell of sectarian violence on the same people who preciously fled religious persecution by the Ottoman empire and it's successors.

The Christian communities in Iraq did not receive any protection from the occupying forces in Iraq after the overthrow of Saddam when sectarian violence was unleashed in the absence of the rule of law formally imposed by so called regime that just happened to allow women to attend university and even enjoy certain freedoms that they don't have even now.

If there's one thing that 'Operation Regime Change' has shown, it is that Arabic countries are UTTERLY incapable of ruling themselves in any kind of all-inclusive democracy. The only way these countries have been and can be in any way stable is through an all powerful dictator or regime, controlling all areas of authority with clear rules of behaviour and expectations. If these aren't adhered to there is the ability and willingness to ruthlessly and brutally exterminate the first sign of rebellion. When the population understand this they resign themselves to toeing the line and getting on with their everyday lives. The country achieves a measure of calmness and stability. Sad but true.

I am pleased to be able to agree with the succinct and accurate survey of more than a decade of US/Western ME actions.

General Hindsight...Better than Napoleon... No Waterloo!
Interesting summary of Western foreign policy in the Middle East, Yes, looking back perhaps just two dictators instead of the present chaos is preferable. But was it avoidable with our Political Masters who, to give them their due, are consistent in backing the wrong horse and the wrong rider?
But the Middle East is in itself a nightmare and a sink hole of for Western aspirations of any democratic reform, and it will continue this way until the Muslim extremists realise the unprofitability of engaging with a vibrant and totslly committed West.
As a start we might demand (not request) that they amend those sections of their Koran calling for the elimination of non-Muslims as a pre-requisite and ultimate right to preach and encourage this doctrine. It seems illogical and hypocritical for our own New Zealand Parliament to allow any Muslim Member to swear upon a book that demands the death of fellow non-Muslims who they actually represent.
To continue with invasions of Muslim countries to rectify a political and military problem and then leaving them as a vacuum is merely courting another disaster. It also multiplies the problem by expecting them to conform into being a civilised democratic nation which respects the rights of other nations; while their religion demands their extinction; is both naive and dangerous.
If Presidential hopeful Donald Trump is right over anything, his assessment of Muslim extremists and the non-extremists who refuse to condemn extremism is correct. Like it or not, we are and have been for decades, at WAR with Islam.
While they continue their religious demands against other faiths and non Muslims they remain the most potential menace facing the inhabitants of this planet. There is and never will be, any effective compromise with Islam over this, and the sooner the West gathers together its will and strength, the quicker we can expect a better life for all.
A wind of change is blowing through our present political establishments; we can but hope that the present political appeasement policies are also swept away. Together with those politicians who have neither the intestinal fortitude, nor the desire to take the action needed to confront and defeat Islam.
Brian