It should not come as news to anyone that there is an on-going vigorous campaign to have transsexualism/transgenderism normalised.

TIME magazine gave it cover page prominence and called it the “next civil rights frontier”. Rows over ‘bathroom bills’ have become a part of the political landscape (see my article “Do we really need new toilet laws?”, Breaking Views 3 June 2016).  National Geographic recently got in on the act with a cover featuring a 9-year-old boy, Avery Jackson, who has been ‘transitioning’ to being a girl since age 7. (PC-Newspeak actually demands that I refer to him as female, but I flatly refuse.) 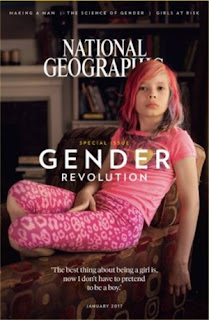 Yes, you read that right – a 9-year-old transgender child. In an age when we have to be extremely careful about revealing minors’ identities in the mass media, here we have a little boy who thinks he’s a little girl posing as a poster girl for a radical social engineering movement. Is that ethical behaviour on the part of the magazine?

Children and teens are becoming more prominent in transgenderism propaganda. An American youngster called Jazz Jennings got a great deal of media attention when he ‘came out’ as a ‘trans girl’ on TV at the age of 6 and now, a decade on, has the first ‘trans doll’ on the market modelled on him. 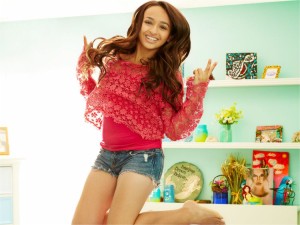 Jazz Jennings inspired another teen, Corey Maison, who has since become a media celebrity in his own right. Fourteen-year-old Corey took the internet by storm last year with a 5-minute video (https://www.youtube.com/watch?v=RlpfXdes38c) in which he holds up a series of cards telling the viewer about his experience as a ‘girl who was born a boy’. He doesn’t say a word but the way he engages the viewer through poignant facial expressions makes spoken words superfluous. The exhibition is accompanied by a catchy song, ‘Misfit’, from a group called High Dive Heart. It’s a slick performance – far too debonair to imagine that this was all the doing of a 14-year-old. My guess is that an adult mentor is coaching him through it step by step. The timing of the body language is spot on relative to the time it would take a viewer to read the writing on the cards – he appears to be acting on cue throughout. In all, it’s a devastatingly effective propaganda piece ostensibly targeting bullying but which in effect aims at sending the message that transgenderism is perfectly natural and normal. 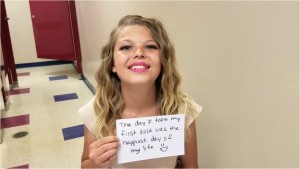 Instilling ambivalence through cognitive dissonance – we know this to be a biological boy, but our sensory inputs are telling us it’s a girl, and a very appealing one at that. This creates a quandary for a hetero man, who cannot accept that he is attracted to a boy. The suggestion that it is a girl who was born a boy ‘by mistake’ offers him a way out. Clever!

Corey is here announcing that he has just started female hormone treatment, a development lapped up by sections of the media – e.g. http://www.dailymail.co.uk/femail/article-3253492/Mom-captures-emotional-life-changing-moment-transgender-daughter-14-surprised-hormone-therapy-drugs-waiting-TWO-YEARS.html. Is this ethical, socially responsible journalism?

There is a slightly longer (6¼ min) rendering of the show in another video for the Bullying Project  (https://www.youtube.com/watch?v=5gfZeUNI7WM). This was months later but Corey’s performance is a bit wooden compared to that in the earlier video. He seems not quite ready – forgot the lipstick or didn’t apply enough? Perhaps the coach from the first video wasn’t present for the making of that second version? There are two adults who join him at the end and with whom you see him communicating visually during the performance with the cards, but there is an amateurish feel about it.

A professional photography outfit used Corey in the production of an advertisement rallying support against ‘bathroom bills’ that oblige transsexuals to use public bathroom facilities corresponding to their birth sex. 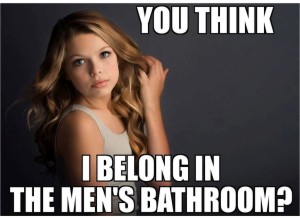 There are numerous professional glamour shots of Corey on the internet (enter his name into Google Images). Samples: 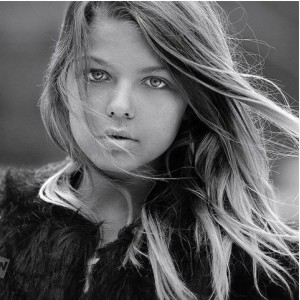 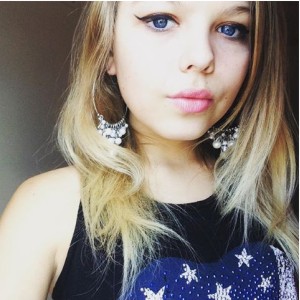 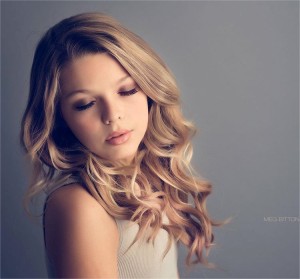 One commentator who runs a website critical of the great push for the normalisation of transgenderism (https://autogynephiliatruth.wordpress.com) put his finger right on the button when he wrote about the mass media “pimping” these “hyper-sexualised” (his words) images of this young teen. This is ‘sexploitation’ – the use of sexually titillating images as a promotion strategy. It’s all around us, and most of it is kosher– but not when kids are involved. The fact that Corey has been a willing party does not mitigate this exploitation of a minor.

Having said all that, Corey has certainly been basking in the limelight and is moreover rapidly coming into his own as a public figure. He appeared in a television advert (https://www.youtube.com/watch?v=DpCwOjdEcGs)  endorsing a candidate for the presidency of a State Board of Education on the basis of that hopeful’s support for transgender school students. (I’ll bet that advert didn’t come out of Corey’s pocket money!) He also made a 2-minute video following Donald Trump’s election (https://www.youtube.com/watch?v=bN_kj7OcrnQ) in which he rallied the faithful to defy the new administration. This is one youngster to watch over the coming decades. He could go a long way – providing he doesn’t end up a basket case and/or suicidee as so many supposedly ‘gender confused’ kids do.

For a bit of background, Corey was the last child of a string of half a dozen kids all of whom before him were girls. With all those older female siblings, maybe I’d be a bit ‘gender confused’ too. (He tells us during the card show that he liked to play with dolls and ‘play at dressing up’ when he was a nipper – ‘monkey see, monkey do’!) Paradoxically, his mother Erica Maison has succumbed to ‘gender confusion’ as well – she is now ‘transitioning’ to being a man and has dropped the ‘-a’ from her first name. Sections of the popular press made a meal of this ‘trans-Dad’ and ‘trans-daughter’ duo (e.g. http://www.mirror.co.uk/news/real-life-stories/worlds-first-transgender-dad-daughter-9647391). Is this ethical, socially responsible journalism?

Just imagine if I or any other hetero man started putting ‘hyper-sexualised’ images of 14-year-old girls (the biologically genuine item) on the internet. We would be in very, very deep you-know-what. We’d be labelled paedophiles, and if we had a following on social media we’d be dubbed the leaders of a child sex ring. We’d probably end up being prosecuted and I’d quite likely be writing subsequent articles for Breaking Views on a prison computer.

Why the blatant double standard? Part of the reason is that we are being hoodwinked by ‘experts’ telling us that these kids suffer from ‘gender dysphoria’ and so the right thing to do is to bring out the real ‘them’ by letting them cross-dress, pumping hormones of the opposite sex into them, and then later surgically altering those kids’ genitalia to effect a fake femalehood or malehood.

What a sham, or should I say scam – we are dealing here with unscrupulous medibusiness operators and their collaborators (certain ‘counsellors’, for instance) staking their claims in this new El Dorado – you’d be surprised how lucrative the rapidly growing ‘gender reassignment’ industry is. As I pointed out in my article “Higher education does not necessarily make people ‘better’ – lessons from ISIS” (Breaking Views 2 November 2016), there is no reason to suppose that a medical practitioner or any other so-called higher professional should necessarily be a more ‘moral’ being than anyone else. We need robust legal mechanisms to keep these characters in check, or the more rapacious among them will wreak havoc – a system of safeguards that appears to be non-operational here.

In my view, a red line has been crossed. The sexualisation of young kids and the use of them in sexploitation should be no-no’s – indeed they are supposed to be, but the rules would appear to be being flouted with impunity. Why? Is it because if we say anything we’ll be accused of ‘hate speech’? Has our coyness in relation to fringe sexuality created a new class of child exploiters who are above reproach?

We Westerners need to take a long, hard look at ourselves in the mirror of our collective conscience and ask ourselves why we are allowing this to happen. We need action from our law-makers to protect minors from this kind of exploitation by lobby groups, shady ‘professionals’, and the mass media. Have they the backbone to stand up to the powerful interest groups involved? Unfortunately, I am not brimming with confidence.

Barend Vlaardingerbroek BSc, BA, BEdSt, PGDipLaws, MAppSc, PhD is Associate Professor of Education at the American University of Beirut and is a regular commentator on social and political issues. Feedback welcome to  bv00@aub.edu.lb.

Barend will know about the various signs which [ in reference to the Roman Empire ] , may accompany the disintegration of a culture/society. Along with obvious things like Currency collapse, Nero fiddling, and a barbarian invasion there was the tendency toward weird forms of social behavior, and sensibility.
We have lived in a decade of catastrophic blundering war and invasion in the Middle East, Africa, Ukraine and so on, but we were devastated when we heard that Donald Trump bragged he nearly had sex with a woman some years ago.

At about ten in the morning here, there is a program of young nymphets being trained up by their Mothers to dance expressively and sexually .
They are about twelve, and strutting their stuff, and their mothers would probably scream if a boy or a man said hello to the child.
In the slick video Barend refers to, the stage management is obvious as barend said, but the writing is similar to that of a 6 year old.
It could not be more obvious that that kid is being manipulated. Those kids, they always seem to have completely weird parents.
We have crossed the red line, and the parents are culpable as well as the manipulators.

With reference to the Society where this freakish sexual cross over malady occurs, Bangkok is jumping with ‘Ladyboys’ and believe me these things will stop a man in his tracks, until they speak. After a while you can pick them [ not pick up ] instantly.
Some do have chromosome abnormalities XYY, and XXY and so on, but these usually show mental or physical characteristics not sexual.

I watched in complete awe the other day when some Democrat spokesman explained on trash American TV [ via internet ] that:
The chromosome and genital configuration meant nothing in sexuality, because “it is how you feel”. He said the science of this was settled.

We made a major societal issue about gender and toilets when hundreds of thousands of families all over the world were being ripped apart by the 100,000 bombs of Islamobama, and other puppet war lords.

There was a time when ‘Time’ magazine and ‘National Geographic’ may have been worth reading, but now they have been captured, and are best handled with tongs, and do not purchase.
It’s all total fruitcake.
Another thing. Barend, get those pictures of little boys off your drive.
You are not allowed pictures of children. Watch it on the TV, or correct PC magazines.