Barend Vlaardingerbroek: Might a Kurdish nation emerge from the ashes of the Caliphate?

The Islamic State is kaput. Unfortunately, not all its murderous members are.

It irked me to see hundreds of ISIS combatants being driven out of Raqqa by a convoy of trucks under a deal whereby they would be allowed to leave quietly rather than fighting it out and being killed, as they should have been. Many of those escapees will have headed for Afghanistan, Libya or Yemen to where ISIS has metastasised. Making headway in those places is proving to be quite a challenge for them as everyone, even al-Qaeda, has it in for them. But the assertion that ISIS cannot survive without territory under its control, first made in The Atlantic in 2014,  are founded on wishful thinking – if anything, ISIS is gaining strength in Afghanistan, and doing so fast despite being at loggerheads with the Taliban and just about every other band of jihadist thugs as well as government forces. 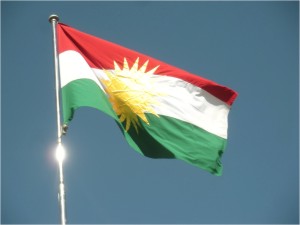 Looking back over the past three and a half years, there was a surreal quality about the Islamic State – the physical entity – that makes one seriously wonder how it could ever have happened in the 21st century. It was real enough at the time – vast chunks of Iraq and Syria were taken over, and the next thing we all knew we were drawing lines on the map delineating a new geopolitical entity that was threatening all around it.

Not that it was altogether something new to see the rapid advance of a determined and confident force against what appear to be superior odds. The initial lightning advance of the Japanese during the last World War is a historically recent reminder of how complacency can result in the rout of apparently formidable defending armies. Then those who were caught napping wake up, restore order and discipline, and a little later go on the offensive and eventually defeat the upstart.

This is assuming, of course, that the power in question has the capacity to mount and sustain a counteroffensive. This at first seemed badly lacking in the case of the Iraqi and Syrian armies, but it’s amazing how much difference a helping hand or two can make. Among those helping hands were the Kurdish peshmerga who drew a lot of positive media attention in the West. 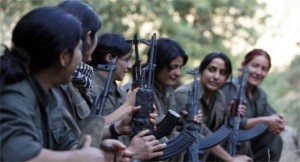 The West rightly has a latent guilt complex in relation to the Kurds. Allies in WW1 against Ottoman Turkey, they were sacrificed to geopolitical expediency after the War, contrary to their rightful expectations of attaining nationhood. The Kurdish independence movement threw up the PKK, which was branded a terrorist organisation by the West, as is the moderate YPG by the Turks. But Turkey under Erdogan is badly out of favour with the West while the Kurds – including the YPG – are definitely in vogue.

The Kurdish autonomous region in Iraq started making moves towards secession late last year, but with ISIS on the ropes the Iraqis had the troops to spare to send in what was effectively an army of occupation the presence of which quelled any further developments in that direction. A Kurdish state arising through secession from Iraq is simply not militarily or politically feasible. But what about a Kurdish nation arising from the partition of Syria?

One could be forgiven for suspecting that a deal to this effect was on the cards with the US establishing a Kurdish border guard force on the Syrian borders with Turkey and Iraq. The Turkish response – the incongruously named Operation Olive Branch – suggests that the Turks share this suspicion. They did not have the moral fibre to confront ISIS in Kobe even when a massacre was about to take place literally under their noses – an act of omission that did Turkey’s image inestimable harm and removed from them any moral credibility – but they are now showing what tough guys they are by getting stuck in with fighter-bomber jets, artillery and tanks. Turkey’s behaviour has been utterly reprehensible on both counts. And that despite strong disapproval from the US, which armed the YPG to enable them to do much of the dirty work in ridding the region of the Islamic State. 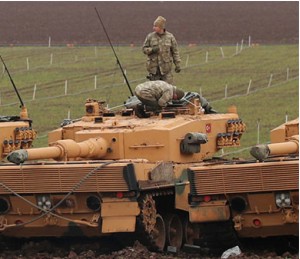 Drat! Where did I put that olive branch I’m supposed to be waving?

A Kurdish nation in northern Syria would please, or at the very least placate, almost everyone else. Iraq would heave a sigh of relief as it would remove the ‘Kurdish problem’ to somewhere else – specifically into the back yard of someone they don’t like – and many of the more independence-minded Kurds living in the Kurdish region of Iraq would presumably move to the new country. The Europeans would be happy as their consciences would be assuaged about the betrayal of 1919, and they would be seeing the formation of a robust Western-friendly country in that most unstable of regions.

The big losers would, of course, be Bashar al-Assad and his regime. Having part of his country taken from him would be a humiliation possibly surpassing that of being removed from office at gunpoint. There will, no doubt, be threats made by the US about the consequences of his trying to do anything about it militarily, and there is no way that either Moscow or Teheran would lend him active support in any showdown with the US. Rightly or wrongly, Damascus would just have to live with it.

Until a couple of weeks ago, the stage seemed set for this scenario to unfold. But with push coming to shove with regard to the Kurdish issue, there has been a turn of events that is forcing everyone to rethink just who is on whose side and who is pitted against whom. Syrian army units have been moving into the northern area controlled by the Kurds to help them repel the Turkish onslaught. It would be an unfair fight given Turkey’s immense military might vis-à-vis the Syrian army. But with the seasoned Kurdish militias that thrashed ISIS now teamed up with an army that has no shortage of the heavy weaponry that the peshmerga lacked, the Turks may be looking at rather more than a blood nose should they persist – and they have invaded a neighbouring sovereign state, after all. The response of the Turkish public to an increasing flow of body-bags from the Syrian front would be unlikely to be in favour of continuing engagement.

So right now we have the farcical situation of the Yanks and the Syrians both backing the Kurds against NATO-member Turkey, albeit in different ways and for different reasons. The Russians must be rubbing their hands with glee and will undoubtedly do everything they can to foment the situation – there’ll be a crate of the best vodka set aside in the Kremlin for the day when Turkish artillery or armour gets wiped out by American ordnances supplied by Uncle Sam to the YPG.

Methinks the most likely outcome is that the Kurds will emerge from this mess with a chunk of northern Syria that parallels the Kurdish autonomous region of Iraq – I’ll bet a pound to a peanut a counter-deal between Damascus and the Kurds is under active and favourable consideration. But a great deal could happen to upset any such cosy little arrangement given the involvement of competing geopolitical powers. The Middle East is a weird place where weird things have a funny habit of coming to pass. Don’t dismiss the prospect of a Kurdish nation-state out of hand.

Justice for the Kurds has been long overdue, and it is an irony – a perverse irony – that the Islamic State inadvertently set in motion the process which may lead to that justice, or at least the next best thing from the Kurdish point of view – for now, anyway.

An excellent coverage Barend. One which gives us a real picture of just what is happening in the Middle East.
If, and only if, the Kurds can form a new nation hammered out in that section of the Middle East, then Israel might feel it has at least an ally in an area dominated by the forces of Islam.
If could form a buffer state to the advance of Muslim domination; which is so obvious to most of us; yet not to Western Politicians so convinced that Muslim immigrants will merge into our society despite obvious signs to the opposite.
You are not alone in being sickened by the “parole” that has been extended to ISIS terrorists in the evacuation from Raqqa; although most New Zealanders would have probably missed this item of news here in “God Own”. I know I did, but by chance thankfully the BBC thought it worth mentioning!
Although a pound to a penny it would have really pleased and overjoyed the Greens, our virulent Left and University professional agitators.
If Western Politicians are going to accept this sort of action, as a part of getting a peaceful result, then I would suggest they read something comparable, such as Rudyard Kipling’s poem “Shillin a Day”. No doubt those soldiers fighting ISIS felt cheered no end, at the prospect of again having to fight the same terrorists in some later place.
In the Army the only good terrorist was a dead one, wonder why our Politicians refuse to accept the same reality?
Brian