Brian Gaynor: Tax plan likely to go the way of the Titanic

The recommendations from the Tax Working Group (TWG) clearly show that the New Zealand stock exchange can't win a trick.

Just four weeks after the NZX and Financial Markets Authority announced a joint study to "focus on accelerating the growth of our capital market", the TWG has kneecapped the initiative.

This is because the group's proposed capital gains tax (CGT) will encourage individual investors and fund managers to invest in global sharemarkets rather than the NZX and ASX.

The accompanying table, which compares after-tax sharemarket returns over a 12-month period, illustrates this point. 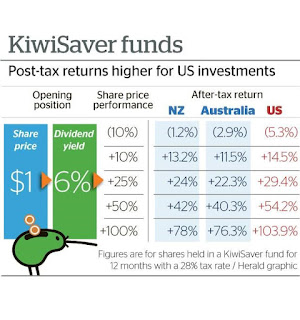 The figures show that if a US share price doubles in a year, then that company will deliver a 103.9 per cent after-tax return, including dividends, for a KiwiSaver fund.

Meanwhile, a NZ company with the same outcome will provide an after-tax return of only 76.3 per cent.

These figures assume the top KiwiSaver tax rate of 28 per cent.

Meanwhile, New Zealand shares have a higher after-tax return than US shares when they both suffer losses, as losses on New Zealand equities will be tax deductible under the TWG's proposals, but not under FDR.

These examples, and many more, illustrate that the recommendations have serious implications for investors and the NZX.

There is a strong argument for a CGT in New Zealand but the tax group has tried to design a Titanic before it has launched a small vessel.

Consequently, the latest capital gains tax will probably go the same way as the Titanic and most other NZ tax recommendations.

• The 1967 New Zealand Taxation Review Committee, known as the Ross Committee, concluded that "the introduction of a realised capital gains tax is desirable on the grounds of equity provided the rates of tax are moderate". No action was taken on the committee's recommendations.

• In 1973, the Third Labour Government introduced the Property Speculation Tax, which taxed up to 90 per cent of realised profits on property sold within two years. The tax was abolished by the Muldoon National Government in 1979.

• The 1982 report of the Task Force on Tax Reform, the McCaw Report, didn't recommend a CGT as it considered this tax to be too complex and would generate little revenue.

• The Comprehensive Tax Reform and Possible Interim Solutions report, released in 1987 and chaired by Dr Don Brash, recommended a tax on all capital gains.

• The 1989 Consultative Document on the Taxation of Income from Capital, called the Valabh Report, recommended that a realised CGT "is desirable on the grounds of equity provided the rates of tax are moderate". The Labour Government supported the Brash and Valabh recommendations but they weren't implemented before Labour lost the 1990 election by a massive margin.

• The 2001 McLeod Tax Review did "not consider that New Zealand should adopt a general realisations-based capital gains tax" as it wouldn't make our tax system fairer and "would increase the complexity and costs of our system".

• Finally, the Professor Bob Buckle-chaired 2010 Tax Working Group Report concluded: "the most comprehensive option for base-broadening with respect to the taxation of capital is to introduce a comprehensive CGT. While some view this as a viable option for base-broadening, most members of the group have significant concerns over the practical challenges arising from a comprehensive CGT and the potential distortions and other efficiency implications that may arise from a partial CGT". Prime Minister John Key subsequently rejected any suggestion of a CGT.

Similar outcomes have been repeated over the past 60 years — either a tax working group rejects a CGT, or if they do recommend one, the politicians do little or nothing.

There are clear signs that the current Government will take limited action as Finance Minister Grant Robertson and Revenue Minister Stuart Nash stated that they are "not bound to accept all the recommendations" and "it was highly unlikely that all recommendations will need to be implemented".

Robertson was also quoted as saying, "we look forward to discussing the recommendations with our coalition and confidence and supply partners as we work to find consensus on the best overall package".

In other words, the minority group is arguing that we should design a small cost-effective vessel before building a huge ocean liner.

The different tax outcomes proposed by the TWG are blatantly obvious in two areas: on NZ entrepreneurs and KiwiSaver investors.

Take for example a NZ entrepreneur who invests $2m in his or her own company and later sells the business for $10m, and compare this with a passive NZ investor who also invests $2m in a US listed high-growth technology group and then sells these shares for the same amount, namely $10m.

Under the current regime the NZ entrepreneur will pay no tax on their $8m profit, but under the proposed CGT they will be required to pay tax of $2.64m.

Meanwhile, the investor in the listed company will pay FDR of about $800,000 under the current and future regimes, if we assume the investment duration is about 4 years.

How can we ask a hard-working NZ entrepreneur to pay $2.64m CGT on his or her share sale while a passive NZ investor in a US listed company will be liable for only $800,000 of FDR on the same percentage and absolute return?

This is a massive disincentive for New Zealanders to invest in their own country.

There is a widely held belief that capital gains tax only impacts the wealthy, but this is incorrect if we include the 2,926,821 KiwiSaver members.

All KiwiSaver funds holding New Zealand and Australian equities, either listed or non-listed, will have lower investment returns if the proposed CGT is introduced.

This will reduce the retirement funds of most New Zealanders, although the TWG has made several recommendations that will reduce the tax impost on lower-income KiwiSaver members and boost their contribution rates.

The TWG effectively released two reports this week, one for the eight members who supported a comprehensive CGT and another for the three individuals who want a more limited CGT.

The minority group believes "taxing gains on business assets and shares raised issues about goodwill being taxed and impacts on capital markets" but "we support a more moderate approach of extending current rules taxing gains, to property categories, only to the extent that benefits clearly exceed costs".

Investors, particularly NZ entrepreneurs and KiwiSaver members, will be hoping that the Coalition Government adopts the minority group recommendations rather than the more comprehensive CGT proposals contained in the main report.

The most practical, and politically effective, way to introduce a capital gains tax is to apply it to residential rental property only, with a tax rate below 20 per cent.

Why is inflation ignored in this debate. If the so called capital gain is less than the rate of inflation the investor has made a real loss. Why is this ignored?