NZCPR Weekly: The Politicisation of a Tragedy

This week we look into how the Christchurch tragedy is being politicised by activists and the Government, our NZCPR Guest Commentator Karl du Fresne explains how a moral panic is being created to justify restrictive law changes, and our poll asks whether you believe the Chief Censor was correct in banning the alleged killer’s ‘manifesto’ explaining why he carried out the attacks. 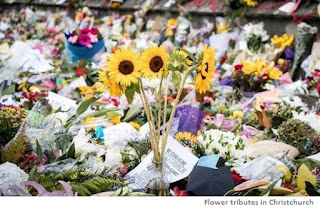 Muriel Newman should be congratulated for her article on the political exploitation of the tragic events in Christchurch; and just how the socialists/Greens have taken advantage of this situation to pillory the majority of us as “White Supremacists” and therefore supporters of terrorism.

The fact that is, that under both Labour and National administrations this country has for some considerable time been financing one the most violent and bloody Terrorist Regime in Gaza. Namely Hamas, this “aid” is sent under the guise that it will help the poor and afflicted occupants of that State.

Systematically since the Labour/Green coalition came into power, it has engendered a policy of hatred against Israel. This is a campaign to promote the Jewish state as the villain of the Middle East, which will, endear our Prime Minister even further in the United Nation; and as some have suggested, a Nobel Prize for Peace!

This came to a ahead when our delegation voted against Israel in the UN which in fact was a very obvious ploy to support Islam.

It is evident that anti-Semitism is a strategic integral part of both their socialistic policy, similar in context to the British Labour Party under its present leadership!

The statement by our Prime Minister that any such repeat of this Christchurch massacre must never happen again is a misguided attempt to assure the general populace. Experience of lone wolf terrorist attacks overseas has shown this to be impossible.

Now we see the aftermath of Christchurch turning into a pathway for rabid Iwi aspirations, a hatred of the “white colonialists” all with the purpose of weakening our democracy. It is a prelude to a situation that will occur should Dame Susan Devoy’s call for a “Hate Speech Law” be passed in this country.

The question of such a law being implemented raises issues on our right to Freedom of Speech, the written word, and is a replica of an Orwellian 1984.

In the event of such a threat turning into a reality, it would be grounds for a total governmental control of our media. The very existence of such independent outlets as the Spectator, Sky News Australia, Facebook and the NZCPR would be curtailed, even threatened; and be subjected in the final analysis to left wing censorship.

...“Just after the Christchurch massacre Sky News NZ withdrew SkyNews Australia news channel 85, and substituted a sports edition. I contacted Sky News NZ and was informed that this was in sympathy with what had happened! Later I was also contacted by an officer from that organisation, who informed me that this decision was taken by the Directors of SKYNZ.”...

This raises the legal question of censorship especially when all this went viral beyond our shores. In a Western Democracy the people have a right to know the full details of such an attack. It should not be forbidden on the flimsy pretext that it would be prejudicial to any trial.

The question arises is why we, the general public, cannot be trusted to view this video/manifesto; when outside these shores non New Zealanders have had access to both? If the video presentation is so horrific it is no different to similar “entertainment shows” now visible on our Television.

Are we then so naive, so innocent to judge for ourselves on the full horror of this attack? Or is there a more sinister motive behind the Government’s heavy handed penalties of even possessing this video and manifesto?

What next? Are we to have a banning and burning of books as in Fascist and Communist countries? Such an act would be more in common and reminiscent of the World’s Totalitarian States!