Those of you who remember your high school French may already realise that the word ‘science’ means something rather different in that language from what it means in modern English. French universities have departments devoted to the ‘Science of the Humanities’. To anyone acquainted with only English, this comes across as silly. I mean, ‘science’ is physics, chemistry, geology and all that stuff – nothing to do with literature, history, philosophy and all that stuff….. isn’t that right? 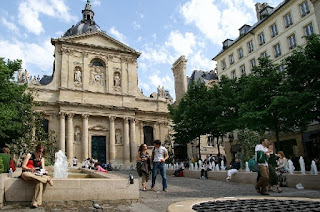 How to confuse an Anglophone: this is the ‘Faculté des Lettres et de la Science Humaine’  at the Sorbonne

We ourselves do have the ‘social sciences’, of course – disciplines in which some of the methods of science, particularly those associated with quantitative data, are applied. In a sense, those disciplines lie between the ‘real’ sciences and the humanities.

The word ‘science’ is derived from the Latin ‘scientia’, which means ‘knowledge’. However, there is an implication in the term of systematised knowledge – knowledge within an organised conceptual framework; what is called ‘wissenschaft’ in German. What we call ‘science’ in modern English is ‘naturwissenschaft’ – a systematic body of knowledge about the ‘natural’ (as in ‘material’) world.

I keep saying ‘in modern English’ because the word ‘science’ in English before the modern era –debatably from around about the mid-18th century – was a lot closer in meaning to what it remains in French.

‘Science’ in the late Middle Ages presented a sophisticated, integrated conceptual framework with astrology as a unifying paradigm. It presented a ‘Theory of Everything’ – what an irony that this is the holy grail for many of today’s physicists. The Theory of Signatures related everything to everything else. For instance, the symbol for the planet Mars was also the symbol for ‘male’ and for copper; the symbol for the planet Venus was also the symbol for ‘female’ and for silver. Medical practitioners would apply the Theory of Signatures to devise treatments. Liver ailments, for example, were amenable to infusions of liverwort – a little plant that bears a resemblance to the liver – and a conscientious apothecary would harvest the herb at an auspicious time as indicated by the zodiacal associations between the herb and the patient’s horoscope.

With us there was a doctor of physic; (physician – BV)
In all this world was none like him to pick for talk of medicine and
surgery;
For he was grounded in astronomy.
He often kept a patient from the pall by horoscopes and magic
natural.

Note that the term ‘astrology’ was in use at the time but referred to fortune-telling, which was likely to lead to a charge of practising witchcraft; most of what is alluded to as ‘astronomy’ here would nowadays be called ‘astrology’.

‘Natural magic’ (spelt ‘magick’ until the 17th century; inverted above to make it rhyme) was pretty close in scope to ‘naturwissenschaft’ – systematic knowledge about material phenomena. A delightful 16th century book to snuggle up in bed with next time there is a lockdown is John Baptista Porta’s mammoth work “Natural Magick” (available at https://quod.lib.umich.edu/e/eebo/A55484.0001.001?view=toc). I particularly like the bits relating to chemistry – “so near and yet so far away” is the thought that constantly flits across my mind while reading it. It was ‘natural magick’ rather than mediaeval ‘science’ which was the precursor of modern science owing to its empirical basis – its reliance on observation rather than philosophy.

Astrology is nowadays regarded as a pseudoscience – something that looks like science but isn’t. Consider a typical natal horoscope: 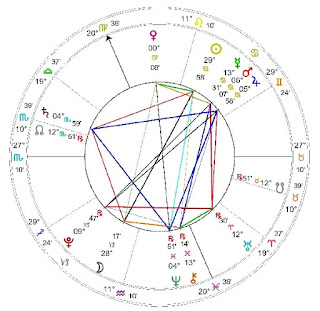 I can imagine Chaucer’s ‘doctor of physic’ thinking, “If I’d had horoscopes like this, I would have been able to cure anything!”

An Ephemeris and a Table of Houses have to be used to painstakingly locate the planets (which in astrological parlance includes the Sun and Moon) in the chart. Angles then have to be calculated between them. There are a couple of hours work there using pencil and paper (of course you can now cheat by using the internet). Interpreting a chart is something machines still don’t do so well – they generally simply note the significance of planets in zodiacal signs and Houses in isolation, whereas a trained human astrologer will interpret the chart holistically.

So why is it not ‘science’, at least not in modern English? Answer: because what we understand by ‘science’ today is necessarily based on empiricism – the dictum that our conceptual framework must be derived from what can be observed and/or measured. The placement of a planet in a horoscope – say Venus in Scorpio – is certainly a matter of measurement, but the resultant assertion that the native (the person for whom the chart is cast) will experience a rather unhappy love life in which pretentiousness and deception will play large parts is not derived from empirical databases but from metaphysical assumptions.

To reorient ourselves to the substance of Bob Edlin’s article, we now come to ethnoscience. The term has two meanings: an individual’s idiosyncratic mindset in relation to scientific matters, and culturally specific ‘wissenschafts’ pertaining to the workings of the world. We are here dealing with the latter. I took an interest in Melanesian ethnoscience while in PNG and published a couple of papers on it, specifically on how it interacted with ‘Western science’ in students’ psyches. Ethnosciences are not all that far removed from the ‘science’ of the Middle Ages. I am not talking here of technical sophistication but about the nature of the axioms that underlie their reasoning processes, which are non-empirical in derivation, invoking as they do various nebulous agencies including paranormal ones.

There is an overlap between pseudoscience and ethnoscience, but the key difference is that ethnoscience relies on culturally specific metaphysical constructs. This makes it look much less like modern science (Anglophone version) than does pseudoscience, which tends to present a façade of recognisably ‘scientific’ procedures and jargon – for instance, the modern astrologer uses tables prepared by NASA. It requires a mind trained in scientific reasoning to see through this smokescreen and identify the underlying fallacies – which explains why so many people, including educated ones, are taken in by them.

Ethnoscience is not ‘science’ as informed speakers of modern English understand the term. It is a world view the conceptual framework of which is derived from metaphysical paradigms arising from identifiable cultural backdrops. It certainly has a place in education but that place is the Social Studies classroom, not the Science classroom. And it certainly has no place whatsoever in 21st-century policy-making about science-related matters.