Lindsay Mitchell: Where the benefit babies are born

Every year I track how many benefit babies there are relative to the total births. Being a 'benefit baby' means relying on a parent or caregiver's benefit by the the end of their birth year. Most will become reliant nearer to their birth date rather than first birthday. Many will go on to experience long-term deprivation.

This year I asked for a  breakdown by Work and Income Service Centre. That was provided. Then I asked the Ministry of Health for District Health Board birth data for 2015. They very quickly obliged without an OIA. Credit to them.


It was then straight forward to place each service centre in a DHB  and calculate the percentage of babies in each district that would be benefit-dependent before their first birthday. 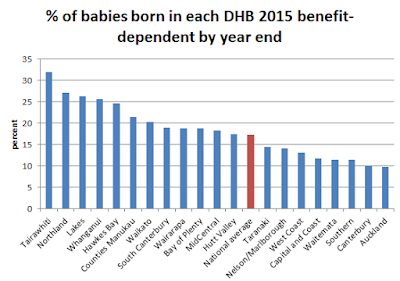 Tairawhiti is Gisborne northwards. Almost one in three children born in 2015 would be on welfare either immediately or shortly thereafter.

This is more than three times the rate of the lowest DHB, Auckland.

The disparity, however, within  the greater Auckland region is highlighted by the difference between Counties Manukau at 21.4% and Auckland at less than half that rate at 9.7%. This disparity is far greater than the disparity in the Wellington region (compare Capital and Coast to Hutt.)

Not surprisingly Tairawhiti is followed by Northland. You will have noticed the tallest columns are those with high Maori populations.(Of all the benefit babies, 54 percent had a Maori parent or caregiver.)

Lakes covers the Rotorua and Taupo region south to Turangi and Whanganui takes in Marton and Taihape.

Hawkes Bay goes to Wairoa in the north and Waipukarau in the south. Counties Manukau is self-explanatory.

These then are the five DHB areas where from 21 to 32 percent of newborns have families unable to support them independently.

At the other end are the cosmopolitan centres. In ascending order, Auckland, Christchurch, Dunedin and Wellington.

Every South Island DHB - bar South Canterbury which is essentially Timaru and inland - is below the national average.

Child poverty is largely (though not exclusively) a result of benefit babies.

But it isn't as if Gisborne and Northland have suddenly been plunged into a depression and unemployment crisis. In fact employment in these regions is far better than it's been in the past. It isn't as if these babies are on their parent's unemployment benefit.

Almost three quarters of benefit babies are on a single parent benefit.

There's the nub of the problem. A lack of two committed parents prepared to take financial responsibility for having a child.

(To end on a positive note, the national average is dropping. At long last.)

We have probably all read statements from Maori leadership along the line that Maori should be increasing their numbers by breeding (eg Tariana Tuira). Is this a factor I wonder?

Shouldn't the vast sums claimed in Treaty settlements be financing these mothers and babies? Not the government. It seems the hand is always out for give give give - oh and are these all virgin births? Or do we have some dads who should be contributing?

Why have you correlated beneficiaries' babies with Maori population densities? What's it for?