Barend Vlaardingerbroek: Brexit and the problematical issue of constitutional change

Ken Clarke: Theresa May has “no idea” what to do about Brexit. According to the former Chancellor, “nobody in the government has the first idea of what they’re going to do next” – ‘New Statesman’ 29 September

Jean-Claude Juncker is very brassed off with the UK, with good reason: there’s been a lot of lead-swinging going on with regard to the UK/EU divorce, and continues to be – despite some tentative prattle about getting things moving in February, there probably won’t be any serious movement on the issue until late 2017, according to informed British sources. 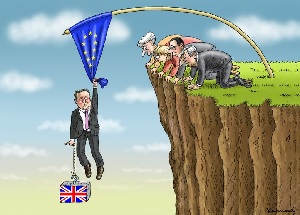 Sometimes, hanging in the balance is the preferred option!

Like a spouse who files for divorce and then gets second thoughts, but at the same time isn’t prepared to back down over the issue that drove him/her to instigate divorce proceedings, the Brits seem to be in a cleft stick: the marriage was soured by some of the conditions imposed by the other partner, but the benefits of dissolution are counterbalanced or even outweighed by the loss of privileges it entails.

Until Theresa May put her foot down and said “No second referendum”, there appeared to be a neat little plot being hatched: run a second referendum on the final UK/EU divorce settlement, pray for a ‘No’ vote, and see the whole Brexit process grinding to an indeterminate halt. This would have left the UK in limbo – which in the view of many would not be at all a bad thing.

The Brexit referendum came up with a bulldogish political statement about national sovereignty, but we don’t really want to exit the European single market, do we? No, we don’t, but we don’t want the strings attached to that access either – especially not the free movement of labour bit. Maybe if we sit it out long enough, some thought, we’ll settle into a permanent limbo that gives us the best of both worlds if we play our cards right. But spoilsport Theresa May evidently wouldn’t have a bar of that. And old Jean-Claude quite obviously saw that one coming as well and will do his damnedest to make sure that the UK does not set a precedent of having one’s cake and eating it too.

But wait, you say, over half the electorate voted ‘out’ so surely we simply have to get on with it.

The UK does not practise ‘direct democracy’. Westminster is not actually legally bound to honour the outcome of the Brexit referendum. However, they said they would, and so everyone assumed that Britain was on the way out the moment the final results came in. But most Westminster parliamentarians did not want Britain to leave the EU, so they can hardly be expected to be enthusiastic about taking the final plunge, especially one so fraught with difficulties and uncertainties that may bring about a voter backlash come the next election.

Perhaps more pointedly, though, over half of the electorate did not vote for ‘out’. 72% of eligible voters turned up at the polling booth of whom 52% ticked the ‘out’ option. That makes 37½% of eligible voters opting for ‘out’ which is not a majority the way I understand the term.

But that’s how British democracy works, you counter. A simple majority in parliament – over half of those who are actually voting – and a bill goes through, so why should this situation be any different?

What the Brexit drama has highlighted is a chink in the armour of the British system of governance – its nebulous constitutional mechanisms. The UK is one of a tiny number of countries (NZ being another) that do not have a ‘written Constitution’ (note the capital ‘C’). There is no such thing as ‘the British Constitution’ in the sense that there is an American or French Constitution. The British constitution (back to lower-case ‘c’) is a mish-mash of conventions (‘gentlemen’s agreements’) and various bits and pieces of documents going back to Magna Carta (most of which had been repealed by the early 19th century).

Then there are ‘constitutional statutes’ – statutes with constitutional effects. Academic sources present different lists of these, but one is certain to be there in any current list: the European Communities Act (ECA) 1972. This statute made UK law subservient to EU law where the two come into conflict – a huge big deal in the light of the doctrine of the supremacy of Parliament, the bedrock of English constitutional law since the late 17th century. Brexit means trashing that Act, and accordingly brings about a major constitutional change – admittedly back to what it was before the Act, but a momentous constitutional readjustment nonetheless. And all on the back of 37½% of the electorate ticking the ‘out’ box.

In systems that have Constitutions, constitutional changes require more than the simple majority that may be required to change ‘ordinary’ statutes, such as a two-thirds majority or an absolute majority (more than half of all those eligible to vote on the proposal). Such arrangements favour the status quo, but that seems right given the function of Constitutions as fixed (albeit not immutable) legal reference points – it ought to take more to change them than to amend an Act that deals with comparatively mundane matters such as the labelling of groceries. We shouldn’t allow Constitutions – or constitutions – to be changed on a whim. And I maintain that a 37½% vote in a non-binding referendum is in the ‘whim’ category.

To apply the absolute majority rule (my personal preference, but there are others) to the Brexit referendum, it would have taken a 69% ‘out’ vote (given a 72% voter turn-out) to get the UK out of the EU. Of course, had people known in advance that an absolute majority would be required, the turn-out would likely have been higher – but I suspect an absolute majority would have been out of range. People are more likely to go and vote if it is change they want than if they are more or less content with the way things are. Most voters who wanted ‘out’ went and voted while the 28% of the electorate who did not vote were probably mostly happy to remain ‘in’; most would presumably have voted ‘remain’ had they turned up.

The same recommendations apply to referenda which have constitutional ramifications.
NZ, as a member of the exclusive ‘wonky constitutions club’, take note.

Brexit and a Constitution
Interesting. but it somehow smacks of “How sour the grapes are today”. A bit like a gambler having lost a bet on a horse wants just another chance at it”!!! If only life was that simple!
Irrespectively of any voting system the people (who got out to vote) won the day, percentages are just that percentages, and to suggest a change in order to get the result you require due to an opposition viewpoint smacks very clearly of dictatorship!
A Written Constitution or an unwritten one? Seeing the problems the USA have with their Constitution in getting any modern change or adaptability...or indeed reconciling any change that would impact on the freedom of the individual is fraught with difficulties.
I think it was Burke who drew attention to the fact that the strength of the British Constitution lay in its “having no theory, in its being the gradual and patient accumulation of practice and precedent, in its being above all, unwritten”.
From memory I recall a passage that it is “An unspoken pact between the past and present....an example of the dead earns the suffrage of the living”??? (Apologies if I have it wrong). Add this to the very obvious factor that there is in both British and American society a general aversion to “rules” and disdain for theoretical enquiry when it invades individual liberties. This still remains despite decades since World War 11 of an ever increasing bureaucracy!
In today’s society there is a requirement of an instant Constitution. I doubt very much that the patience needed to embrace all such requirements written into it that a people would want. Would it still remain a virtue!
Despite its obvious drawbacks I still support our present system, what is needed to help is a deal more control over our elected members in Parliament ( I purposely leave out our list members as they merely parrot their party line) on how they conduct OUR democracy.
Brian