Brian Gaynor: In this game, we're beating the Aussies

One of the major differences between New Zealand and Australia is their respective political systems and this difference may have contributed to the much stronger financial performance of the New Zealand Government in recent years.

Australia has a bicameral, federal system with 13 houses of parliament and 782 elected representatives while New Zealand has a unicameral structure with only one house and 119 current members.


Australia has an odd number of houses because Queensland has only a lower house whereas the other five states, and the federal government, have upper and lower houses.

A paper, Unicameral v. Bicameral: Pros and Cons, by Ava Alexandar, Molly Milligan, Robert Stern and Tracy Westen sums it up this way: "The strength of the unicameral system is its simplicity, transparency and efficiency - values that have generated responsive and accountable legislative systems in Nebraska and New Zealand.

"By contrast, the strength of the bicameral system is its greater deliberation, expertise and legislative oversight. Either system, however, comes at a price. The unicameral system may lack effective oversight of both itself and the executive branch, and the bicameral legislature may witness great gridlock, log-rolling, and buck passing, in addition to less transparency."
The recent political turmoil in the United States clearly indicates that the bicameral, federal system can result in serious political instability.

Recent Australasian evidence demonstrates that New Zealand's unicameral structure is working much better than Australia's bicameral system from both a stability and financial performance point of view. New Zealand has had only three prime ministers since 2000 while Australia has had six and the recent Australian Budget, and next week's NZ Budget, clearly shows that our Government is managing its financial affairs more effectively than the Australian Federal Government.

The concerns raised by the Alexandar, Milligan, Stern and Westen paper about oversight problems with unicameral systems may have been overcome in New Zealand by the checks and balances created by our Mixed-Member Proportional representation (MMP) system.

The Australian Budget, which was released on May 3, shows that the Federal Government is forecasting a deficit of A$37.6 billion for the June 2017 year, its ninth consecutive deficit. The latest deficit equates to 2.1 per cent of GDP compared with a recent deficit high of 4.2 per cent of GDP in 2009-10.

Meanwhile, the Federal Government's net debt position has gone from a net surplus of A$38.8b in June 2008 to a net deficit of A$325.1b at the end of next month. Net debt comprises all financial liabilities minus all financial assets of general government.

The June 2017 net debt to GDP ratio is 18.6 per cent, still low by international standards.

One of the obvious conclusions from these figures is that the Australian Government has borrowed its way out of the global financial crisis and this strategy will continue, with its net debt forecast to expand to A$355b by June 2018 and A$375b a year later.

In addition, the six Australian state governments will have a small combined budget deficit for the 2016-17 year and will have total net debt in excess of A$100b at the end of next month.

The Australian Budget was not greeted with great enthusiasm across the Tasman. The ANZ Bank noted: "This is an ambitious Budget that looks to change the game on infrastructure, deliver some measures around fairness while looking to achieve a reasonably credible path back to surplus. It is not without risk, not least in its reliance on increased revenue to close the gap with spending and the continued growth in gross (and net) debt".

Other commentators were highly critical of the additional tax on banks and unwillingness of the Federal Government to initiate major tax reform. The latter is consistent with earlier comments in this column that bicameral systems "may witness great gridlock".

In light of these figures it is not surprising that the Australian business community is becoming increasingly frustrated with the country's political systems and its political leaders.

Government finances are in a far better shape on this side of the Tasman even though the New Zealand Government experienced large budget deficits in 2010-11 and 2011-12, mainly due to the Christchurch earthquakes. 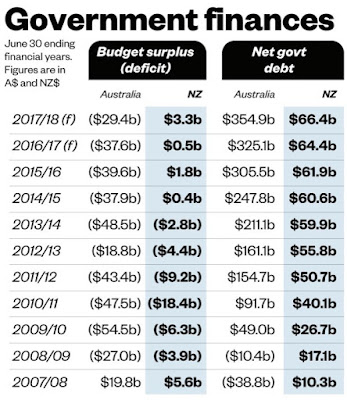 The situation has improved dramatically since then, with the Crown reporting budget surpluses in 2014-15 and 2015-16 and officially forecasting another surplus of $0.5b for the 2016-17 year. This positive trend is expected to continue with the Treasury forecasting a Crown surplus of $3.3b for 2017-18 and $5.4b for the following year.

The outcome may be better than this as demonstrated by the Financial Statements of the Government of New Zealand for the nine months ended March 31. These statements revealed a surplus of $1.47b for the nine-month period, compared with a forecast surplus of $0.15b, and indicate that the 2016-17 year surplus will be closer to $1.8b than the $0.5b forecast.

The better than expected Crown surplus for the nine months to March was due to a number of factors including:

• Crown tax revenue was higher than expected, mainly because corporate tax receipts were $673 million ahead of forecast.

• Crown expenses were below budget mainly because of "lower than expected impairment of debt and bad debt write-offs for tax receivables".

The higher than expected nine-month surplus has resulted in Crown net debt of $62.0b at the end of the period compared with the June 2017 forecast of $64.4b.

If Crown net debt remains around $62b at the end of the current financial year it will have increased by only $2.1b, from $59.9b, over the past three years. Meanwhile, Australian Government net debt will have surged from A$211.1b to A$325.1b over the same period. The latter figures exclude state net debt.

New Zealand Finance Minister Steven Joyce will present his first Budget next Thursday. He is in a more enviable position than Australian Federal Treasurer Scott Morrison when the latter presented his Budget this month. Joyce identified the following four priorities in his recent pre-Budget speech to the Wellington Chamber of Commerce:

• He wants to deliver better public services for New Zealanders in a growing economy.

• Joyce is planning to build better infrastructure for the country.

• The Finance Minister wants to reduce the tax burden on lower and middle income earners but added "when we have the room to do so".

Joyce's only specific hints about next week's Budget were that he would announce how the first tranche of the Government's $23b capital investment programme would be spent and would outline new strategies to reduce the Crown's net debt to GDP ratio to between 10 and 15 per cent by the mid-2020s.


In light of the Crown's strong financial position, and the September 23 election, it would be disappointing if Joyce didn't announce a medium-term strategy to reduce tax on lower and middle income earners.

Beating the Aussies.
Brian Gaynor analysis between Australia and New Zealand makes interesting and informative reading. Although with the difference between our two systems of government I just wonder whether any comparisons are of very much use.
There is a major difference with, as Bryan states, the Australian system being far more complex in that State Governments in Australia seem to be in election terms always at odds with the Federal Government. This may be due, especially in the case of the Liberal/Nationals having to deal with Labour State Governments!
Bryan has omitted that we here having Regional Governments, not yet on the lines of similar State Governments in Australia, but certainly heading that way in their bureaucracy. Like Australian State government regional governments run into debt and use the ratepayer cash cow to balance the books.
Bryan’s criticism of the Australia Senate is justified, as we have seen in the rejection of any vital changes passed by the present Liberal/National Government in the lower house. This is a complete opposite to the British House of Lords, which can only delay legislation. In actual fact it serves only to amend and correct what it feels are defects in that legislation, and passes its recommendations back to the House of Commons.
Our deficit is high even though the present administration has tried to reduce this and at the same time please all sectors. Regretfully deficits and borrowings by successive governments provided that the money is spent on such obvious election winning incentives as housing; general welfare, hospital etc receive praise from all quarters.
The obvious fact is that most Western Governments have been borrowing against the future, and at the same time attempting to get people to save and not spend. Which is so clear a hypocrisy in an inflationary environment. where the criteria of “live within your means” was totally undermined by John Maynard Keynes theory of a “little inflation”.!
The outstanding difference between Australia and New Zealand in democratic terms is the way we elect our parliamentary members of Parliament. In Australia, people elect all their members to the House of Representatives, while we elected just over half. The remainder of our List members are in the first instance loyally committed to the Party’s policy. Their Party Ranking on the list, and the fact they are picked by the party commits them entirely to support the Party legislation. To vote against the party means certain oblivion.
I have always seen the MMP electoral system as another sop for minority parties; who fail in realising that the great majority view their party manifestos and promises with a great deal of suspicion.
So long as Governments continue to spend to retain power, the larger the debt our generations to come will have to face.
John Adams once remarked “That government is little better practiced now than three or four thousand years ago”!
Brian.