China is talking up its achievement of mining flammable ice for the first time from underneath the South China Sea.

The fuel-hungry country has been pursuing the energy source, located at the bottom of oceans and in polar regions, for nearly two decades. China’s minister of land and resources, Jiang Daming, said Thursday that the successful collection of the frozen fuel was “a major breakthrough that may lead to a global energy revolution,” according to state media.

Experts agree that flammable ice could be a game changer for the energy industry, similar to the U.S. shale boom. But they caution that big barriers — both technological and environmental — need to be cleared to build an industry around the frozen fuel, which is also known as gas hydrate.

China, the world’s largest energy consumer, isn’t the first country to make headway with flammable ice. Japan drilled into it in the Pacific and extracted gas in 2013 — and then did so again earlier this month. The U.S. government has its own long-running research program into the fuel.

The world’s resources of flammable ice — in which gas is stored in cages of water molecules — are vast. Gas hydrates are estimated to hold more carbon than all the world’s other fossil fuels combined, according to the U.S. Geological Survey.

Experts worry about the release of methane, a superpotent greenhouse gas with 25 times as much global warming potential as carbon dioxide. And although burning natural gas is cleaner than coal, it still creates carbon emissions.

The fuel source has a lot of potential in China, analysts at Morgan Stanley said Thursday, citing the country’s successful trial and government support to develop the industry.

But commercial production is unlikely in the next three years due to high costs, potential environmental concerns and technological barriers, the analysts said in a research note.

“If there is a real breakthrough,” they wrote, “it could be as significant as the shale revolution in the United States. Under such a bull case scenario, we’d expect a significant increase in offshore exploration and production activities.”

When China’s President Xi Jinping visited with President Obama last month, one prickly issue was high on the agenda for the two leaders – China’s activities in the South China Sea and the Spratly Islands.

China maintains that it has “undisputable sovereignty” over the region, and that this had been the case “since ancient times.”

Allies in the region – including Vietnam, Taiwan, Malaysia, the Philippines, Brunei, and Indonesia – would beg to differ.

The United States’ chief concern is that Chinese expansion in the region will be militaristic. But my take is somewhat different.

Look at the Long Term

An important thing to remember when analyzing China is that it always takes a long-term view. Forget next year. China is focused on five and 10 years from now.

For instance, where will China get enough energy to power its huge nation in the decades ahead?

One possible answer is the methane hydrate deposite at the bottom of the South China Sea. Methane hydrates are a form of crystalline ice that has methane (natural gas) trapped inside. In effect, it is burnable ice.

Just last year, China discovered a high-purity methane hydrate in the northern part of the sea, offshore from the Guangdong Province. The high-end estimate for that reserve is that it contains the equivalent of 150 billion cubic meters of natural gas.

Chinese experts believe the South China Sea as a whole contains methane hydrate reserves equal to 68 billion metric tons of oil. That figure amounts to 130 years worth of the country’s energy consumption. 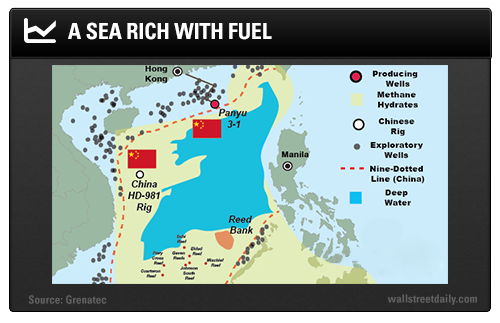 Methane hydrates constitute the world’s No. 1 reservoir of fossil fuel. Ubiquitous along vast stretches of Earth’s continental shelves, they hold enough natural gas to fuel the world for a thousand years – and beyond. 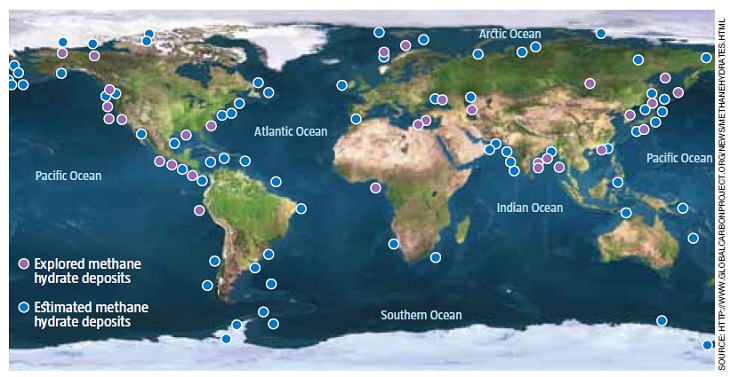 In a joint announcement two weeks ago, the United States and Japan (along with ConocoPhillips, the U.S.-based multinational oil company) announced the world’s first successful field trial (in Alaska) of a technology that uses carbon dioxide to free natural gas from methane hydrates – the globally abundant hunks of porous ice that trap huge amounts of natural gas in deposits, onshore and offshore, around the world. It’s a neat feat. You use CO2, which

Methane hydrates constitute the world’s No. 1 reservoir of fossil fuel. Ubiquitous along vast stretches of Earth’s continental shelves, they hold enough natural gas to fuel the world for a thousand years – and beyond. Who says so? Using the most conservative of assumptions, the U.S. Geological and Geophysical Service says so.

The U.S. now produces 21 trillion cubic feet (tcf) of natural gas a year. But it possesses 330,000 tcf of natural gas in its methane hydrate resource – theoretically enough to supply the country for 3,000 years (give or take). Using less conservative numbers (for example, a methane hydrate resource of 670,000 tcf), the U.S. is good to go for 6,000 years (give or take).

Worldwide, methane hydrate reserves add 1,000,000 tcf to the global natural gas resource. We have a ways to go before commercial exploitation begins but the question must now be asked: Isn’t it time to relax a bit about peak oil – or, for that matter, peak primary energy? We are not apt to run out of carbon to burn for a very long time. It is true: Only a fraction of these resources can be deemed economic in the near term. But a fraction of them could still deliver plentiful energy for many centuries.

Presentation by Dr Benny Peiser, Climate Change Forum — Hong Kong, Saturday, 27 May 2017 - Duke of Windsor Social Service Building, Wanchai, Hong Kong Island 2pm
During his election campaign, Donald Trump pledged to roll back President Obama’s climate and energy policies. He promised to withdraw the US from the Paris climate agreement and stop all US payments to UN global warming programmes. Trump declared that he would develop America’s mammoth oil, gas and coal reserves to the full and make global energy dominance the strategic, economic and foreign policy goal of the United States. The US is sitting on hundreds of years of oil, gas and coal which has the potential to turn North America into the 21st century’s energy superpower. The shale revolution is having huge economic and geopolitical implications while America’s major competitors are trying to shackle the US into a low-carbon future that would essentially rob it of its assets. The Paris agreement vows to cap global warming to “well below” two degrees Celsius (compared to late 19th-century levels) which, campaigners claim, would require the US to massively cut CO2 emissions from conventional energy production. It would also mean most of America’s gas, oil and coal reserves would have to stay in the ground, thus relinquishing hundreds of trillions in economic gains while the US would be forced to surrender the prospect of becoming the world’s leading energy superpower. Yet despite Trump’s unequivocal pledge, his administration is deeply divided on whether to fulfil his promise to withdraw from the Paris agreement and to pursue his America First Energy plan. In this talk, I will discuss the political and economic challenges the US administration faces regarding the Paris climate agreement. I will also address the international and geopolitical implications of Trump’s climate policy decisions.

OPEC may get its members to agree to continue to tamp down oil production, but it will be a Pyrrhic victory. The biggest threat to the 13-member group’s dominance has been U.S. shale.

In November 2014, the Organization of Petroleum Exporting Countries decided to keep production levels high in the hope it could maintain market share. But that was a difficult task to begin with, and since then, U.S. shale producers have become even more efficient.

By the time OPEC reversed course in November 2016, sending oil prices up as much as 10 percent, shale had already gained ground.

There are areas in the enormous Permian and Eagle Ford shale fields in Texas where producers can break even at prices as low as $34 a barrel, according to Bloomberg Intelligence. 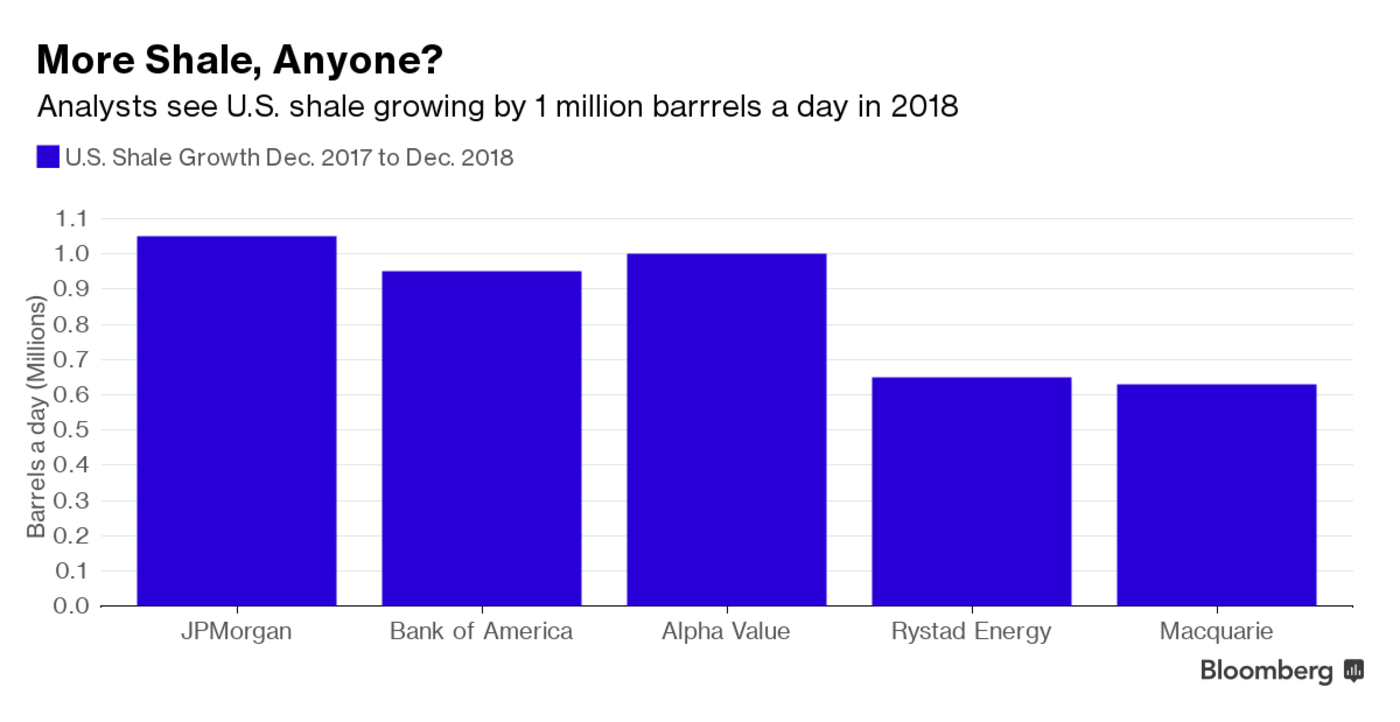 As OPEC and non-OPEC producers (namely Russia) cut back on production, U.S. shale producers are moving to quickly fill the gap. Their output increase is equal to about half of the OPEC cuts and twice that of Russia’s cuts, according to a report out this week by Eugen Weinberg, head of commodity research at Commerzbank.

“If the production cuts were to be extended, the participating countries would lose further market shares, which they are hardly likely to accept for any length of time,” the report said.

It isn’t going to get a lot better for OPEC in 2018, either. JPMorgan is forecasting U.S. shale to grow by 1.05 million barrels a day next year, while Bank of America Merrill Lynch has a figure of 950,000 barrels a day.

Even a “drastic” downward shift in the market conditions won’t lead to a rapid collapse of U.S. oil production, according to Rystad Energy. Many wells that have been drilled—but haven’t been completed—could still be brought online profitably if the price falls to $40 or even $30 a barrel, Rystad said in a report on May 11.

As far back as 1911, geologists predicted that significant mineral wealth lay below East Texas, in what was then called the Woodbine Stratum - a formation above the Haynesville Shale.

And Columbus Marion “Dad” Joiner proved them right in 1930, when the Daisy Bradford No. 3 well struck oil just outside Henderson in western Rusk County.

But no one predicted the vastness of the energy wealth available here. Last month, the U.S. Geological Survey announced a re-evaluation of the Haynesville and Bossier shale formations. 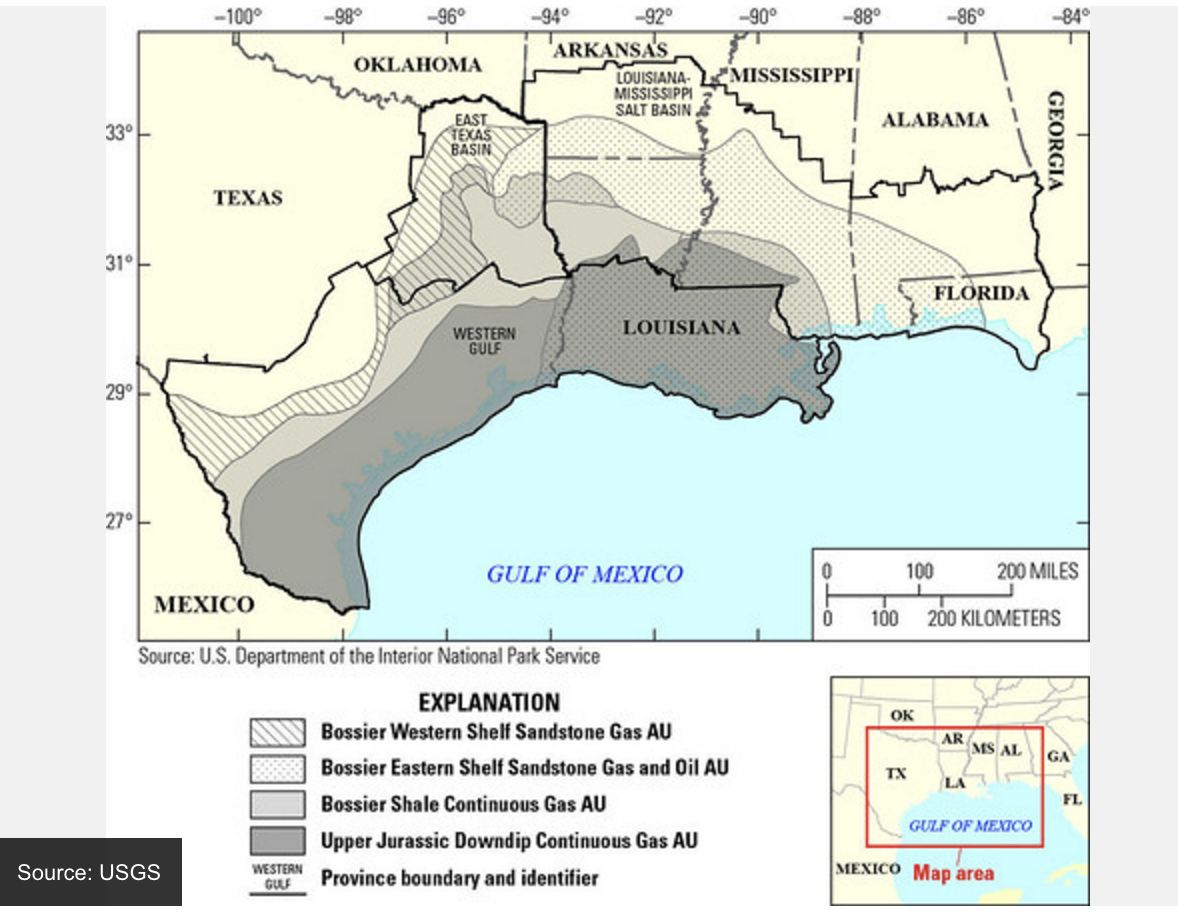 “These estimates, the largest continuous natural gas assessment USGS has yet conducted, include petroleum in both conventional and continuous accumulations, and consist of undiscovered, technically recoverable resources,” the USGS says.

This is big news for East Texas and the nation as a whole.

U.S., Norwegian, and German scientists report back on the surprising results of an Arctic Ocean research expedition.

The ocean waters near the surface of the Arctic Ocean absorbed 2,000 times more carbon dioxide from the atmosphere than the amount of methane that escaped into the atmosphere from the same waters, according to a study by the USGS Gas Hydrates Project and collaborators in Germany and Norway.

The study was conducted near Norway’s Svalbard Islands, above several seafloor methane seeps.

Methane is a more potent greenhouse gas than carbon dioxide, but the removal of carbon dioxide from the atmosphere where the study was conducted more than offset the potential warming effect of the methane emissions that were observed.

“If what we observed near Svalbard occurs more broadly at similar locations around the world, it could mean that methane seeps have a net cooling effect on climate, not a warming effect as we previously thought,” said USGS biogeochemist John Pohlman, who is the paper’s lead author. “We are looking forward to testing the hypothesis that shallow-water methane seeps are net greenhouse gas sinks in other locations.”  […]

The study can be accessed here. The USGS Gas Hydrates Project is an international leader in the study of methane dynamics related to environmental and energy issues. In addition to the expeditions on the Svalbard margin, USGS has studied the interchange between methane and carbon dioxide at the ocean surface in Alaska’s Beaufort and Bering Seas, on the U.S. Atlantic margin, and in the Baltic and North Seas.