The New York Times issued a correction to its Tuesday front page article, now admitting that the government climate report it “obtained” had actually been publicly available online for months.

“An article on Tuesday about a sweeping federal climate change report referred incorrectly to the availability of the report,” TheNYT wrote in its correction issued Wednesday morning. “While it was not widely publicized, the report was uploaded by the nonprofit Internet Archive in January; it was not first made public by The New York Times.”

TheNYT ran a front page article Tuesday claiming to have exclusively obtained a draft climate report that “directly contradicts claims by President Trump and members of his cabinet” on global warming.

Unnamed scientists told TheNYT they feared the Trump administration would suppress the climate report. The report is part of the National Climate Assessment that’s released to the public every four years.

Climate scientists that worked on the report, however, were quick to point out it’s been online since January. The National Oceanic and Atmospheric Administration published a copy of the report online in March.

The Daily Caller News Foundation pressed TheNYT on this, but reporter Lisa Friedman insisted the report was not publicly available.

After hours of criticism, The NYT quietly switched copies of the climate report from a “third order draft” to a “fifth order draft,” which has not been made public and is under review by the White House.

Scientists familiar with both drafts said there was no substantive difference between them. TheNYT formally issued a correction to its front page article Wednesday morning.

“It was uploaded to a nonprofit internet digital library in January but received little attention until it was published by The New York Times,” the corrected NYT article reads. The article still reports some scientists “were concerned that it would be suppressed” by Trump.

However, four unnamed co-authors of the draft climate report told the Associated Press that they “have not heard of or witnessed any attempt by the White House to suppress or censor the scientific document.”

“The alarmist climate media is at it again,” U.S. House Science Committee Chair Rep. Lamar Smith declared Tuesday after liberal media pounced on a debunked New York Times report claiming it exclusively obtained a “leaked” report the Trump Administration may be trying to cover up.

The supposedly-leaked and suppressed report had, in fact, been publicly available for months before the New York Times reported its “scoop” – forcing the Times to publish a correction to its story. But, as Newsbusters analysis shows, that didn’t stop liberal news networks from sensationalizing and repeating the discredited story:

“On Monday, all three networks pounced on the story, speculating about the Trump administration’s nefarious plans. Good Morning America‘s George Stephanopoulos warned, “No word yet on whether they will suppress, dismiss, or endorse the report.” (Isn’t it hard to suppress something that’s already public?)

“On CBS This Morning, Major Garrett offered a lecture on what the document means: “The lack of comment from officials here and from those at some of the relevant federal agencies about this report’s startling conclusions suggest not just skepticism but, at least initially, a lack of curiosity.”

“The three networks did not inform their audiences on Tuesday that the secret report was not, in fact, secret.”

The false reports prompted U.S. House Science, Space, and Technology Committee Chairman Lamar Smith (R-Texas) to lash out at liberal media for their agenda-driven “fake news” on the draft climate assessment reported on by the New York Times.

“The alarmist climate media is at it again.  In its latest reporting of a so-called leaked climate assessment the New York Times relies on exaggerated statements and false allegations of cover-ups in order to push an agenda.

“To treat a climate report that has been public for months and is currently undergoing official comment by numerous federal agencies as a final document does a disservice to the American people.  In numerous instances, the report fails to examine some of the most current data.  For example, the impact of El Nino on the climate is completely downplayed and misconstrued to conflict with historical reports.”

By their “attempts to falsely link” climate change to weather events, media are violating the principles of scientific integrity – and merely reporting “fake news,” Smith concludes:

“Moreover, this alarmist reporting attempts to falsely link extreme weather events to climate change, when the data has never suggested this.  Making temperature predictions far into the future has proven to be nothing more than speculation, and goes against the principles of scientific integrity.  We should treat this document for what it is, an unfinished draft that requires serious revision.  To report it in any other way is just fake news.”

Lord Lawson blasted Al Gore for his major interventions in warning the world of the dangers of global warming saying there were bigger threats to focus on – including North Korea and terrorism.
But Lord Lawson hit out at the costs involved in climate change policies and said the money should be spent on more pressing matters.His comments come as Donald Trump controversially pulled the US out of the Paris climate change deal, signed in 2015 by 195 countries, in June.

Speaking on the Today programme, on BBC Radio 4, Lord Lawson, chancellor from 1983 to 1989, said: “Al Gore has a substantial economic interest in renewable energy.

“If it is fully economic, why on earth do we subsidise it and support it by all sorts of government policies which are driving up the cost of energy, particularly in the United Kingdom. 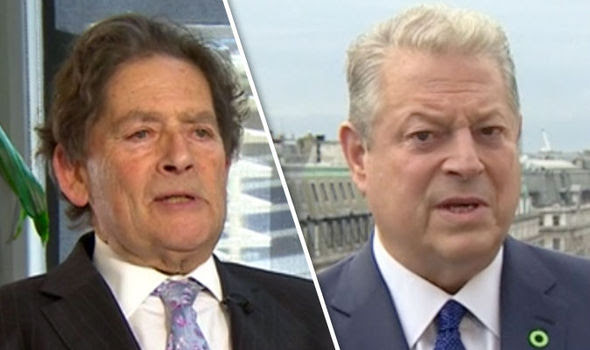 “I’ve heard what Al Gore has to say and it’s the same old clap trap.

“People often fail to change and he says he hasn’t changed, he’s like the man who goes around saying ‘the end of the world is nigh’ with a big placard.
“To begin with you might be a little bit scared but after ten years of him doing that and the end of the world isn’t nigh, then you think ‘maybe we should forget that and concentrate on real problems like North Korea’, like world poverty, like disease and all these other issues which we should be diverting our attention to.

“The world is not short of problems and to devote resources and energy to non-problems is really ridiculous.”

Radio 4 is facing criticism for airing an interview with Lord Nigel Lawson in which the former Chancellor took to the airwaves to deny former US Vice President Al Gore's warnings about the effect of climate change.

The past Conservative minister was heard on the Today show giving a response to environmentalist Gore, who was interviewed to publicise An Inconvenient Sequel, his film promoting environmental responsibility.

In the interest of editorial balance, climate change denier Lawson was then interviewed, taking the opportunity to dismiss Gore’s concerns with the environment as “clap trap” and accuse the filmmaker of diverting attention away from "other issues".

Lawson said: “I’ve heard what Al Gore has to say and it’s the same old clap trap. People often fail to change and he says he hasn’t changed, he’s like the man who goes around saying ‘the end of the world is nigh’ with a big placard.

“To begin with you might be a little bit scared but after ten years of him doing that and the end of the world isn’t nigh, then you think ‘maybe we should forget that and concentrate on real problems like North Korea’, like world poverty, like disease and all these other issues which we should be diverting our attention to.

"International terrorism, Islamic fundamentalism, these are real problems. The world is not short of problems and to devote resources and energy to non-problems is really ridiculous.”

However, many were unhappy with Lawson’s inclusion in the argument, with figures such as Professor Brian Cox and Green Party politician Natalie Bennett suggesting the science about climate change was too conclusive to offer any meaningful debate.

An inconvenient truth: Global temps were warmer when Al Gore won the 2007 Nobel Prize than today, even after the 2015/16 super El Nino.

It has been an inconvenient week for Al Gore, the climate change activist and former presidential candidate.

He had hoped that his new film about global warming, An Inconvenient Sequel: Truth to Power, would whip up the same sort of excitement that swept its predecessor, An Inconvenient Truth, to huge commercial success and an Oscar for best documentary in 2007.

“By filling theatres, we can show Donald Trump and the other climate deniers in the White House that the American people are committed to climate action –– no matter what they do, say, or tweet!” Mr Gore wrote in an email to supporters on Friday.

Instead, on the most lacklustre weekend of the North American summer box office so far, the film limped to takings of $900,000, making it the 15th most popular film in the country.

Would-be protesters could be imprisoned or fined if they cause obstructions, are found slow walking or attaching themselves to vehicles or objects, cause any criminal damage or theft.

The company which holds a fracking licence for Winsford has taken out a High Court injunction in a bid to stop protesters at its sites.

INEOS, which was awarded a licence to frack on land between Kelsall and Wimboldsley in December 2015, gained an interim injunction last week to prevent obstruction or interference in its activities.

It means that would-be protesters could be imprisoned or fined if they cause obstructions, are found slow walking or attaching themselves to vehicles or objects, cause any criminal damage or theft, or interfere with companies working with INEOS, such as suppliers.

The firm, which also holds fracking licences covering Northwich and Knutsford, claims that the injunction should maintain peace.

But anti-fracking campaigners fear the state is becoming more complicit in facilitating fracking – and that the injunction goes against the human right to peaceful protest.