London 28 June: An explosive report from the Global Warming Policy Foundation (GWPF) reveals that efforts to recycle plastic are a major cause of the marine litter problem. The report, written by public health expert Dr Mikko Paunio, sets out the case for incinerating waste rather than trying to recycle it.

* Most of the plastic waste comes from just a few countries, mostly in Asia and Africa.

* 25% is “leakage” from Asian waste management processes — the rest is waste that has never been collected, but is simply thrown into rivers.

* But European countries ship inject huge quantities of waste into Asian waste management streams, ostensibly for recycling. As much as 20% — millions of tons every year — ends up in the oceans and will continue to do so.

* Since the Chinese banned waste imports at the start of the year, shipments have been diverted to other Asian countries with even weaker environmental controls (Figure 1).

“It is clear that the European contribution to marine waste is a result of our efforts to recycle. However, several countries have already shown that they can reduce this contribution to near zero, by simply incinerating waste”.

Despite this success, the EU is trying to redouble recycling efforts and to close down the incineration route, mistakenly believing that this will reduce carbon emissions. As Dr Paunio puts it,

“The effects look as though they will be appalling. We can expect a great deal more plastic to end up in the environment, and in the oceans in particular. If the EU was serious about its war against marine pollution it should consider banning the export of plastic recyclate rather than banning plastic straws or taxing incineration.” 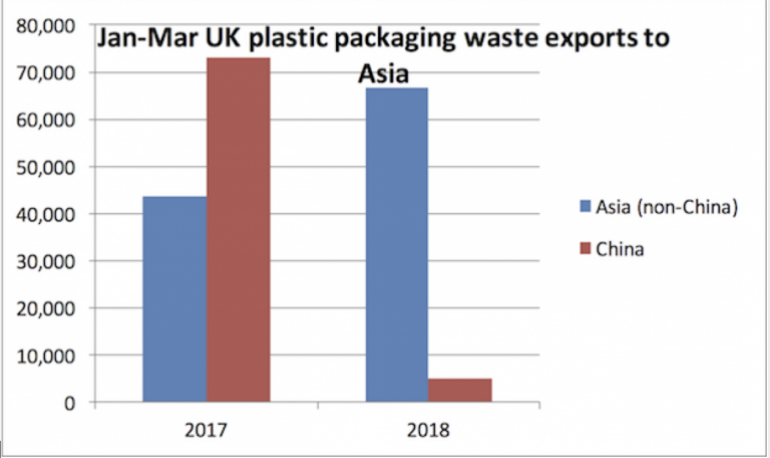 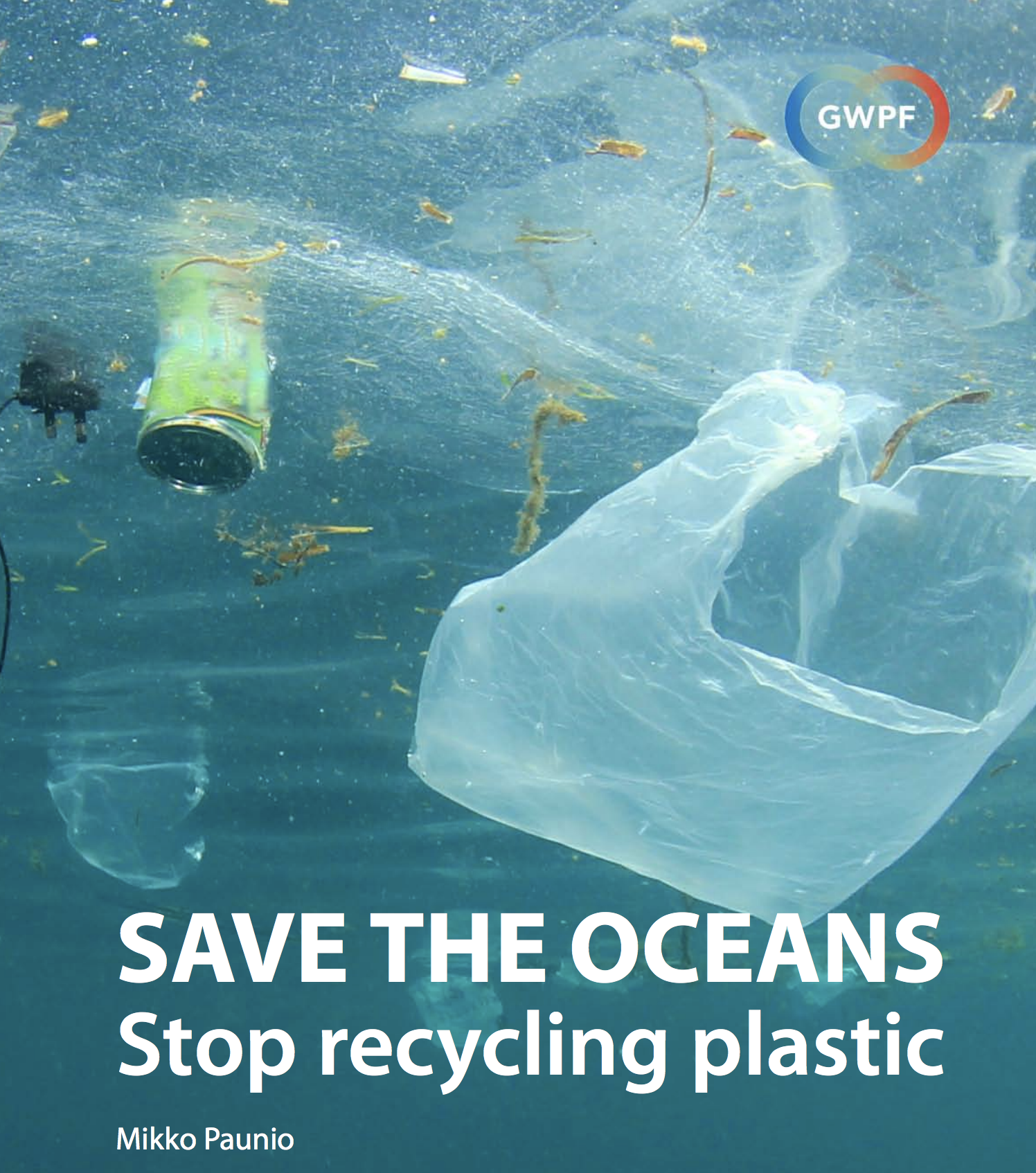 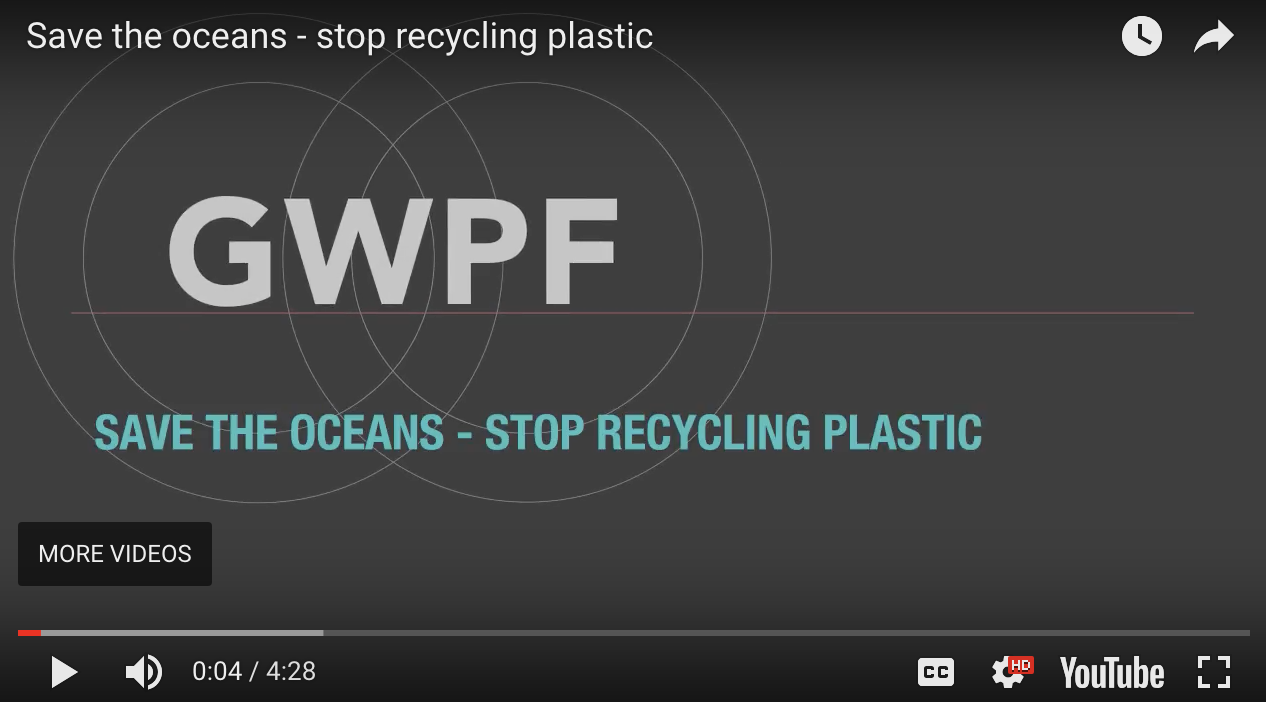 Click on the image above to watch the video

Mikko Paunio: Save The Oceans – Stop Recycling Plastic
The title may sound odd to ordinary people, but the sad fact is that the global “recycling” industry has significantly added to the marine plastic litter problem. 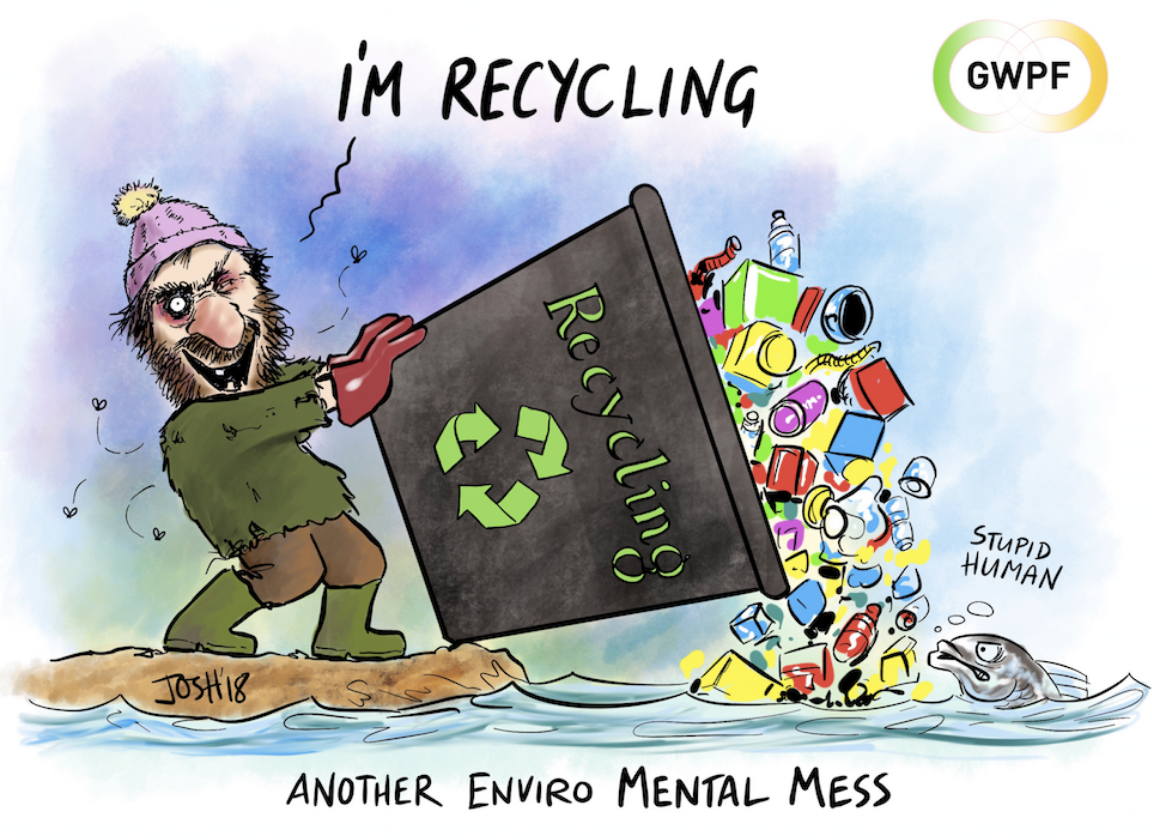 I have put recycling in quotes, because only a small fraction of plastic recovered from consumers is actually recycled: the material collected is dirty and so mixed up that it is impossible to produce the high-quality raw material required by, for example, the food-packaging industry. Most recovered plastic is simply burned or dumped: on land, in rivers, or even directly in the oceans.

Unable to recycle waste in line with the targets imposed on them, rich countries have chosen to dump it — plastic, paper and cardboard — on poor ones, especially China. Lower environmental standards in much of Asia has made it cheaper to manage waste there and low-quality recycled plastic can sometimes be profitably produced from these waste streams, albeit in highly polluted conditions.

In recent years, the stream of waste delivered to China expanded vastly. Annual imports reached 85 million tons, including 8 million of plastic. The quantity was so huge that inspection at ports became impossible, and the unscrupulous found that even mixed or hazardous waste could profitably be sent, disguised as “recycling” to avoid landfill tax or high management costs in rich countries. Unable to handle this tsunami of refuse, the Chinese were forced to either burn or dump vast quantities. An unknown amount found its way to the oceans.

The consequences for the environment and for public health of this “recycling” madness have therefore been horrendous, and have ultimately proved too high for the Chinese, who have now banned waste imports entirely. Recent figures suggest that recycling businesses in the UK have responded by simply shipping waste to Asian countries with even weaker environmental standards. So even more waste will end up in the oceans in future.

Meanwhile, the EU is doing almost nothing to reduce the flow of waste. It is sticking to its idealistic environmental dreams, claiming to be in the forefront of efforts to save the oceans through a “circular economy” strategy. History tells a different story — efforts to focus on recycling have led to one environmental disaster to another, with the ocean plastic crisis being just the latest.

Readers may recall the waste crisis in the Italian region of Campania, which was overwhelmed by so-called “ecoballs” — the two-thirds of plastic waste that was rejected by its sorting facilities. The streets were awash with rubbish, dioxins spread across the region, and the eventual breakdown of public order.

It should be understood that all recycling schemes – including paper recycling — leak either plastic litter or microplastic to the environment. If we truly care about saving the oceans, then recycling of plastic and paper should stop. And there is a clear and sensible alterative available, namely incineration. Incineration was the way Campania put its waste management system back on an even keel. It is also the basis of the waste management strategy of many EU countries, and as such has proven to be hugely successful on all measures.

Yet despite this clear superiority to other approaches, incineration is being dismissed and discouraged, by EU politicians and bureaucrats, but most importantly by the unholy alliance of “recyclers” and green NGOs, who together lobby for ever-more complicated recycling schemes. If the EU was serious about its war against marine pollution it should consider banning the export of plastic waste rather than banning plastic straws.

As someone once said, “Where there’s muck, there’s brass”. Unfortunately, as far as recycling is concerned the price is paid, not just by ordinary consumers, but by the oceans and the rest of the natural environment.

Dr Mikko Paunio is a Finnish public health specialist and an adjunct professor in general epidemiology at the University of Helsinki. He is the author of the new GWPF paper  Save The Oceans – Stop Recycling Plastic

Absolutely agree.
As the majority of plastics are just petro chemical, incineration for power generation, is the same as using oil.
So killing two birds with one stone,reduce the waste and for the greenies less oil produced.