Lindsay Mitchell: What could be kinder than offering a jobseeker a job?

Apparently the treatment of beneficiaries has become harsh and they are subject to unreasonable obligations. An 'expert' panel has been appointed to review the welfare system.

But what could be kinder to a jobseeker than the offer of a job?

MSD freely admits however that it can't get people off benefits despite a demand for workers. In a just-released publication relating to trends as at 2017 they say:

"Exit rates for jobseekers are lower than expected. Demand for low skilled labour in the regions is not being readily absorbed by jobseekers in those regions."

This indicates a choice on behalf of  jobseekers despite the eligibility condition, "To receive Jobseeker Support a client must be willing and able to undertake employment."

So the rule is ignored. Nothing new there. Let's face it NZ is a place where most people follow rules in order that a few can ignore them without consequences. (And then those following the rules get accused of undue privilege and power.)

As the unemployment rate is dropping, the likelihood people will leave a benefit is also dropping. 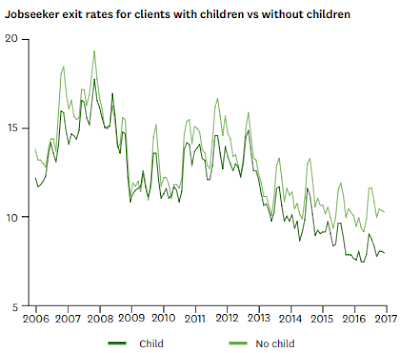 Maori make-up 15% of the population but 35% of beneficiaries. Unsurprisingly, their exit rate from the system is also declining and lower than non-Maori. 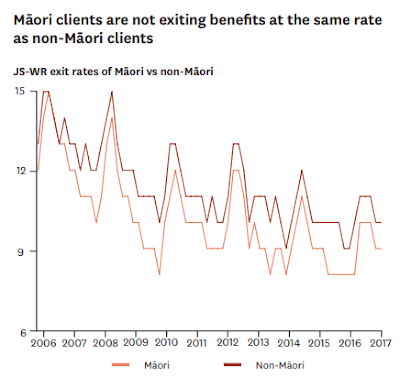 There are just under 119,000 people currently on a jobseeker benefit. The number has been fairly static over the past six years, but is at risk of rising, especially with the messages being sent by the current government. The Minister, Carmel Sepuloni,  announced today that benefit suspensions - one of the tools staff can use to persuade people into jobs - have fallen by more than a fifth since she changed the policy to allow only senior staff to apply them. 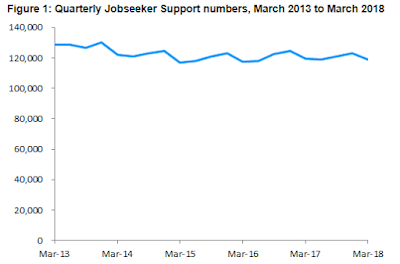 The last Labour government made a song and dance about not wanting 'dead-end' jobs for beneficiaries (Steve Maharey) - an insult to anyone who works. So getting people into education and training became the holy grail. The current Labour government has perpetuated this ideology with their spectacularly unsuccessful tertiary first-year-free policy.

On the bright side, 60 percent of people who exited to go to employment were still employed after 18 months.

Which brings me back to the opening question, what could be kinder than offering a jobseeker a job?

There is an answer: making him or her accept it.

NZ is good at offering a carrot, but less so in applying the stick! Of course, the matter of politicians buying votes comes into it too!

Fortunately I've been retired for a couple of years so can receive a benefit without threats of penalties, however a couple of times in my 40s and 50s I had to resort to the dole queue and know from experience that WINZ staff are incapable of assisting people back to work. Essentially they are a draconian organisation supported by middle class voters who haven't experienced redundancy, lay offs or other unemployment causations. Many of those middle class voters are vocal about 'dole-bludgers' but perfectly happy to support prisons, which is a sad reflection on their intelligence since most young unemployed cost the taxpayer around $300 a week whereas it costs that per day to keep the same person in prison. MSD is simply another agency that stagnated under National and needs a complete overhaul.