Barend Vlaardingerbroek: To what extent am I “my brother’s keeper”?

And the Lord said unto Cain, Where is Abel thy brother? And he said, I know not: Am I my brother's keeper? - Genesis 4:9

You must take reasonable care to avoid acts or omissions which you can reasonably foresee would be likely to injure your neighbour. – Lord Atkin on the duty of care, 1932

This picture of the bodies of a man and his little daughter after drowning in the Rio Grande en route to the US swept across the globe. 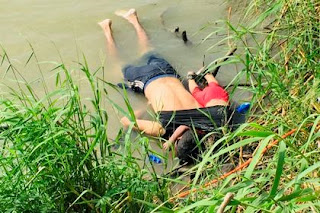 End of the illegal migrant road for one man and his child – a child he recklessly chose to take with him on this perilous journey.

Pictures such as this, and those of illegal migrants being fished out of the Mediterranean and kids being held in detention centres, are meant to tug at our heartstrings and awaken our conscience: somehow it’s all our fault, and we should feel guilty and take action to put things right. 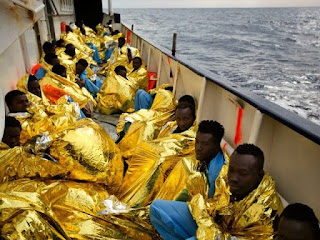 Another rag-tag lot of ‘refugees’-that-aren’t. Another day and they may well have ended up as drowning statistics. They knowingly chose to be in that position. 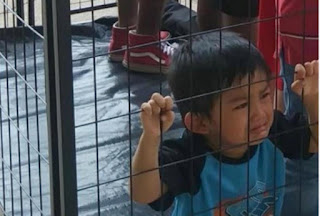 Kids in detention centres, courtesy of irresponsible parents who made the choices that landed them there.

There are certainly people who succumb to the emotional blackmail and act accordingly. Activist groups send ships out to provide a shuttle service for illegal migrants. 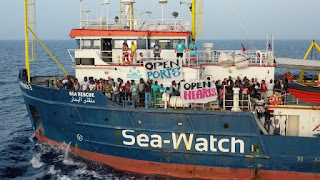 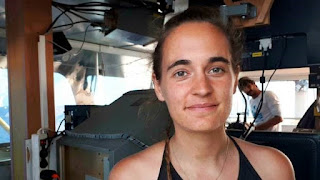 This captain headed for an Italian port despite explicit orders from the authorities to not do so. Her reasons were the deteriorating ‘humanitarian situation’ on board. You’d think that those weren’t too bad compared with ending up as fish tucker which those illegals would have done had they not been ‘rescued’.

The archaic expression “my brother’s keeper” connotes taking responsibility for someone else’s actions – fronting up for the consequences of choices that other person made. There is an element of transferred culpability in the phrase. Well, I for one am not wearing it.

Let’s update the expression a bit. In the seminal case of Donoghue v Stevenson 1932, Lord Atkin elaborated on the notion of the ‘duty of care’. The duty of care makes us our “brother’s keeper” to a certain extent. It means acting with due consideration to avoid injuring others. Failure to exercise due care amounts to negligence, which makes us liable for any resultant injury. In international law, the duty of care arises in various situations including that of a sea captain upon encountering a distress call from a vessel in need of assistance. The captain who ignores such a call is failing in his/her duty of care as outlined in the Convention on the Law of the Sea. But it does not mean encouraging people to place their lives in peril at sea in the expectation of being picked up and being relocated in another, better country (see my article “Cutting the crap – dealing with illegal migrants in the Mediterranean”, Breaking Views 23 April 2015).

Recall the furore in NZ over schools feeding kids because their parents can’t be bothered giving them breakfast or ensuring that they can have a decent lunch. And it’s all our fault, especially where those kids are members of a certain ethnic group, so we have to make it right. But why should I, as taxpayer, finance the culpable negligence of irresponsible parents towards the children they chose to bring into the world? What should be happening is action being taken against negligent parents. They are the ones in breach of the duty of care, not you and me.

I take my duty of care very seriously. I will exercise my democratic right to try to bring about laws that will hold people to account for the choices they make where those have an adverse impact on others, particularly their dependents. I will exert what political influence I have to try to make Western powers hold the governing elites of developing countries to account for the mismanagement and corruption they preside over that ruin the lives of so many of their citizens (see my article “Donald Trump’s new geopolitical designation”, Breaking Views 3 Feb 2018).

What my duty of care does not entail is relieving others of their duty of care, be they individuals or governments. Unless circumstances intervene that make it impossible for those in question to fulfil their duty of care, such as serious illness or armed insurrection respectively, I will not take on the role of their, or their dependents’, ‘keeper’.

Charity starts at home, and so does the duty of care. My duty of care does not entail compromising my national sovereignty by circumventing my country’s immigration laws and letting in hordes of illegal migrants to subsequently see them turning parts of my cities into ghettos and queue-jumping my own needy people for much-needed social services (see my article “What the ‘yellow vests’ tell us about today’s Western liberal democracies”, Breaking Views 6 Feb 2019). I will be the ‘keeper’ of genuine refugees (i.e. those fleeing war or persecution) while they need asylum but I will send them back home once the threat that drove them out has subsided. As for the fake refugees – the majority of them – I will pack them straight back to where they came from. My duty of care stops at seeing them safely onto a home-bound ship or aircraft.

There are those who say that I lack compassion. I don’t agree. My compassion manifests itself through addressing the core problems rather than mealy-mouthing over those and sticking a band-aid over them while the underlying sores fester and spread. Emotionally-driven, ideologically-laced ‘compassion’ leads to absurdities such as the farce involving a Saudi ‘refugee’-who-wasn’t getting into Canada on the fast track earlier this year (see my article “Manipulating the refugee system”, Breaking Views 19 Jan 2019).

Unless my ‘brother’ is totally inept and incapable of making rational choices, I am most certainly not his ‘keeper’. I have a duty of care towards him, but I will not accept the burden of his responsibility by taking on any liability arising from his freely made choices.

There is certainly a level of logic to this article, but I am sure what I am about to suggest will offend and shock others....
I believe it is time that we sterilize offenders and beneficiaries...offer incentives and/or the option of losing benefits if non-compliant
We can't afford to finance indiscriminate breeding by those who don't look after their offspring such as offenders and long term beneficiaries so why should we continue to pay for them.
Police often state that it is the same families that are most often behind crime, sterilization would put an end to generational offending in as little as 20 years ..think of the savings in our prisons alone, money that could be spent on those who truly need our assistance.
As for beneficiaries, we all need help sometimes, and sometimes it needs to be from the state, but there is a line when long term beneficiaries continue to pop out babies that the rest of the country pays for. Many of these babies are born on into substandard conditions, often to parents or parent who don't give a damn and don't care for and nurture and these children. The children deserve more and so do the tax payers
I would rather see my tax money going to housing programs for those who truly need and will appreciate it than continually been given to generational bludgers and offenders.