The Great Barrier Reef is not dead, is not dying and is not even on life support, federal Environment Minister Sussan Ley has declared after her first official visit to the World Heritage-listed site. 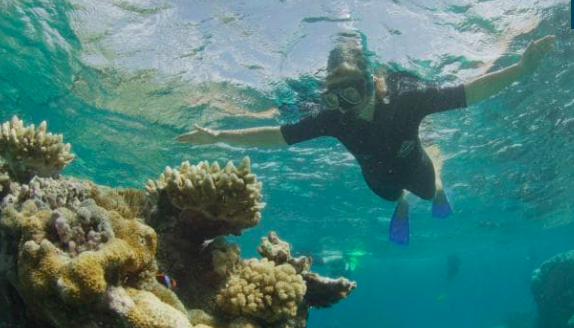 Minister of the Environment Sussan Ley snorkelling over the Great Barrier Reef off the coast of Cairns.

Returning from a snorkelling trip to Moore and Flynn reefs offshore from Cairns, Ms Ley was happy yesterday to broadcast the message that tourism operators desperately want heard around the world.

“It gives me heart and hope that the future of this magnificent part of the world is a good one.”

Ms Ley said not everything was perfect and there had been areas that were struggling from the impact of cyclones.

However, she told The Aus­tralian conditions were better than she had expected. 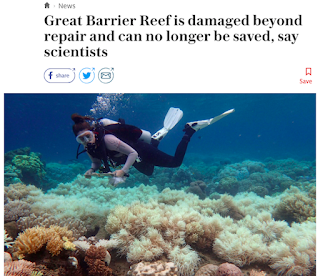 How scientists mislead the world about the Great Barrier Reef
“I was expecting to see dead areas with a few patches of life,” Ms Ley said.

“I saw the exact opposite to that.”

She has backed the concerns of all sides and attempted to avoid some of the more bitter areas of dispute.

These include new water quality regulations for Queensland farmers, calls for better quality assurance for reef science and the outsourcing of reef program delivery to the Great Barrier Reef Foundation by the Turnbull government.

The Queensland government has introduced new water quality laws to parliament that will more closely monitor and supervise fertiliser use and nutrient run-off in Great Barrier Reef catchments.

Marine scientist Peter Ridd has begun a speaking tour in Queensland calling for a new body to check the quality of reef research.

The GBR Foundation has been given $444 million by the federal government and is expected to raise matching funds from private donors.

The federal opposition had said it would have withdrawn the funding if it won the federal election.

NEW DELHI: The rebound in monsoon rainfall has created ideal conditions for agriculture for the rest of the year with accelerated planting and much more water in reservoirs, which officials said would lead to record food production this year. 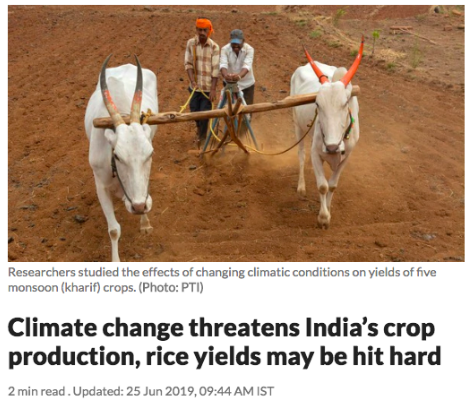 The habitual climate scare based on short-term weather changes ….

Rainfall in August has been 35% above normal so far, which has further improved crop planting and filled up major reservoirs with 25% more water than the 10-year average. 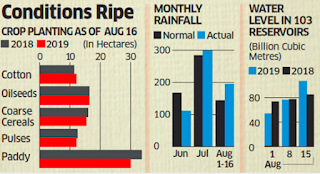 … and the reality of ever-changing weather that exposes the habitual failure of climate alarmismThis completes the turnaround of the farm situation that looked grim in June when authorities were planning drought-relief measures as rainfall was one-third less than normal and reservoirs were depleting at a time they normally fill up to meet post-monsoon requirement of drinking, irrigation and power generation.

Now the conditions are ripe for a good harvest of the kharif, or summer-sown, crop and higher farm incomes, which in turn should boost festive season demand and to some extent revive sales of vehicles, gold and consumer goods in an economy where companies have been nervous about weak demand.

The clear intention of this paper is to try and put an even tighter lid on the scientific literature and mainstream media so that any individuals with views that run counter to a message-of-climate-doom are excluded. 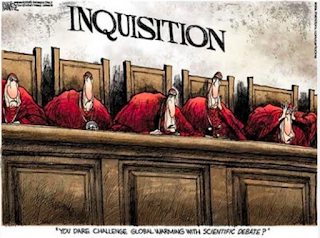 Along with hundreds of other people – 385 to be exact – I have been blacklisted [#181] by the science journal Nature Communications in a recently-published abysmal paper by three authors from University of California Merced, after I and a number of others were publicly defamed by a squadron of authors in a similarly-stupid paper less than two years ago in the general interest journal BioScience.

This obsession that scientists-with-a-message have about silencing peers with other viewpoints (rather than constructing and communicating a winning argument themselves) is vile and utterly counter to what real science is about. Not surprisingly, they positively fawn over media stars like Al Gore and Greta Thunberg who have no science background but willingly repeat the accepted message of climate-change-doom.

Now we have two stupid papers that purport to uphold the sanctity of one particular view of climate change: the Harvey et al. “absolutely the stupidest paper I have ever seen published” (Curry 2017) – which we all truly thought could not be matched – and now the Petersen et al. “worst paper published in a reputable journal” (Curry, 2019).

Judith Curry: “Apart from the rank stupidity of this article and the irresponsibility of Nature in publishing this, this paper does substantial harm to climate science.”

Jo Nova: “Skeptics get banned, rejected, blocked and sacked from the mainstream media yet somehow Nature has a paper on Skeptics getting too much media. Believers don’t have to be an expert to control the news agenda, just a Greenpeace activist, or a teenage girl. Skeptics on the other hand, can be Nobel Prize winners, but the BBC won’t even phone them.”

The two papers were equally-poorly conceived and executed: see critiques of the new one here, here, here, and here. Jo Nova summarized the new Nature paper this way:

“…compares bloggers, commentators and journalists with largely academic scientists, as if the two groups ought have comparable scientific citations or media mentions. Somehow paid scientists get more science citations and professional media personalities get more media. Who would have guessed? Or rather, who couldn’t?”

However, Petersen and his co-authors crossed a very clearly defined ethical line – they did research on human subjects without their consent and then publicly named them. An unknown number of people, including Roger Pielke Jr., have filled official complaints with the journal and at least one has threatened a lawsuit.

The list of subjects and other ‘supplementary material’ was available for two days – plenty of time for internet immortalization – and while it was eventually removed, that action did nothing to correct the underlying ethics violation. Even if, as seems very likely, the paper is withdrawn because of it, the damage has been done: the list is out there.

That this Nature paper was intended as a blacklist is made clear by the press release, comments by the authors (another quoted below, my bold), and their supporters.

“It’s time to stop giving these people visibility, which can be easily spun into false authority,” Professor Alex Petersen said.  “By tracking the digital traces of specific individuals in vast troves of publicly available media data, we developed methods to hold people and media outlets accountable for their roles in the climate-change-denialism movement, which has given rise to climate change misinformation at scale.” 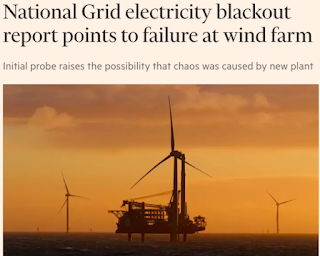 The provisional report, which was submitted to regulators on Friday, suggests for the first time that the Hornsea offshore wind farm, which is owned and run by Denmark’s Orsted, may have tripped offline seconds before an outage at a smaller, gas-fired station.
The findings, which were relayed to the Financial Times by people briefed on the report, suggest the blackout may have been avoided if not for an error at the wind farm.
Full story (£)
5) Renewable Energy Is A Blackout Risk, Warns Britain's National Grid
Mail on Sunday, 18 August 2019

National Grid had evidence that the shift to renewable energy was putting Britain’s electricity supply at risk months before the biggest blackout in a decade, The Mail on Sunday can reveal. 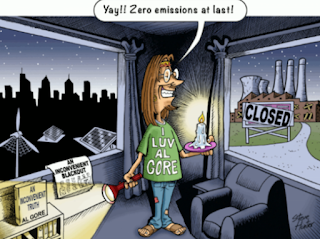 The company, which is responsible for keeping the lights on, has downplayed the role of wind energy in the power cut that caused widespread chaos earlier this month.

John Pettigrew, chief executive of the FTSE 100 firm, described the outage as a ‘once-in-30-years’ event and said there was ‘nothing to indicate there is anything to do with the fact that we are moving to more wind or more solar’.

In a report based on a £6.8 million research project, National Grid admitted that renewables increased the ‘unpredictability and volatility’ of the power supply which ‘could lead to faults on the electricity network’.

Britain’s National Grid is routinely restricting the use of its own power cables from the Continent because of the risk of blackouts if they failed.

Britain’s electricity system is sufficiently fragile at certain times of day that if one of the subsea “interconnectors” tripped while importing at full capacity, it could trigger power cuts like those of August 9.

A senior National Grid source told The Times that for several years it had been managing this risk by limiting the use of the cables at these times, especially overnight, so as to reduce the size of the potential supply shock.

They said that the costs of doing so, which are understood to run to many millions of pounds, were cheaper than paying for enough back-up to withstand a potential failure.

The disclosure of the arrangement, described by one analyst as “perverse”, raises questions over how National Grid manages supplies and over its plans to spend billions of pounds building more interconnectors.

Ministers should impose limits on the construction of new wind and solar farms to help avoid a nationwide blackout, according to a former director of National Grid.

Colin Gibson, who was power network director of Britain’s electricity system, claimed that some existing turbines and solar panels may have to be disconnected, and new developments restricted, to “secure” the system after major power cuts earlier this month.

In an analysis co-written by Dr Capell Aris, a former grid engineer, Mr Gibson states that the system failure revealed several “serious problems” with the operation of the national electricity network, which require an “immediate, independent, expert review”.

Their intervention comes amid a government inquiry into the outage, which occurred after the Little Barford gas-fired power station in Cambridgeshire and a major wind farm off the Yorkshire coast both temporarily stopped producing electricity. According to the Financial Times, a provisional report by National Grid suggested that the wind farm may have tripped offline seconds before the Little Barford power station.

The blackout affected a million people in London and the South East, the Midlands, the South West, Yorkshire, the North East, Cornwall and Wales.

National Grid, the firm that operates the country’s power network, has insisted that unpredictable wind power generation was not to blame (sic!).

But, in an analysis of public data on the electricity running through the grid on the day of the outage, Mr Gibson and Dr Aris claim that the failures of the two plants resulted in a loss of frequency – a measure of energy intensity – five times greater than historic slumps.  Mr Gibson was power network director at National Grid from 1993 to 1997.