Barend Vlaardingerbroek: The start of a new era in the Middle East?

2019 has been a good year for Vladimir Putin with Donald Trump effectively handing over the reins as chief powerbroker in the Middle East, or at least a substantial part thereof, to him.

Putin did not need any further prompting once the US army units began their withdrawal from northern Syria. Within a fortnight he was in direct talks with Erdogan and a ceasefire was put in place. Days later, Turkey announced that it had ended its military operation against the Kurds. Russian and Turkish units began to patrol the 20-mile strip of land adjoining the Turkish border. (Trump claimed a great American diplomatic victory – he had threatened to annihilate the Turkish economy should they try to wipe out the Kurds. A BBC news report fittingly showed a line of Russian armoured vehicles on patrol as they presented this dubious announcement.) 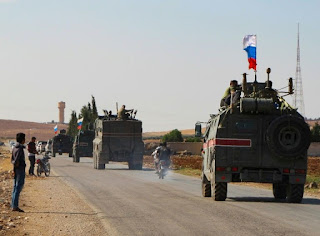 I do sympathise with Trump’s disavowal of a ‘global policeman’ role for the US and his desire to disengage from ‘endless wars’. Let someone else fight over bloodstained sand, he said. And were my ears playing tricks on me, or did I really hear the BBC reporter saying that Trump had thanked the Syrian government for their assistance in hunting down and eliminating ISIS headman al-Baghdadi?  Is there a softening in official American attitude towards the Damascus regime in the offing?

Putin is to be commended for having avoided a military confrontation between Turkey and Syria. It seemed to have been forgotten by Western commentators that Turkey invaded a neighbouring sovereign nation, the Syrian Arab Republic. (We see yet again the blatant hypocrisy that so often sullies the application of international law: we don’t like the regime in Damascus, so we’ll ignore this wholly illegal incursion.) Syrian army units were moving into position to take on the Turkish army. While the two sides would at first glance appear to not be at all well matched, it has to be borne in mind that the Syrians are battle-hardened and would have had the ‘home advantage’ of defending their own turf. They had also been in receipt of lots of shiny new military hardware courtesy of Moscow. In short, such a confrontation would have been fierce and bloody with high casualties and an uncertain outcome – all-out war between the two countries could easily have resulted.

It is very much in Moscow’s interests to keep Ankara and Damascus from each other’s throats. For one thing, there is the Russian naval base in Latakia. But self-interest aside, as an ally of Bashar al-Assad and on cordial terms with Tayyip Erdogan, Putin is in a perfect position to be an honest broker. With Russia in the driver’s seat, I think we may be looking at the prospect of a far more stable Middle East – or that crucial corner of it at least – than we have seen over the past few years. 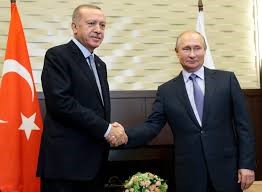 I’d hate to think what may have happened had it not been for this meeting – all-out war between Turkey and Syria and all the spill-over effects that would have engendered?

There are, however, two flies in the ointment: the Kurds and ISIS. In an earlier article (“Might a Kurdish nation emerge from the ashes of the Caliphate?”, Breaking Views 1 March 2018), I speculated on the possibility of a Kurdish nation being established in northern Syria. I think I can now safely answer the question I posed with a definitive ‘No’. Both Damascus and Ankara are fiercely opposed to any such development, and there is no reason why Moscow would want to be seen backing such a move. What I do see as a very real possibility in the medium term is the creation of a semi-autonomous Kurdish region – Damascus may well warm to the idea of having a buffer between the rest of Syria and a perennially hostile Turkey.

There have been dire warnings about ISIS regrouping. Personally, I believe them to be less of a danger now than they were before this momentous geopolitical power shift.  The Russians too are threatened by ISIS – many fighters were drawn from the Muslim regions of the Russian Federation – and will be working closely with their Syrian allies to nip any re-emergence of that nefarious crowd in the bud. Both have had plenty of practice in dealing with insurgencies and the Syrians have a very good intelligence network on the ground. 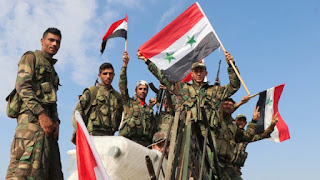 Syrian army units. Do not mess around with these guys.

Now to one of my pet hates, NATO. In October, we saw a farcical but potentially dangerous situation developing with two NATO ‘allies’ coming uncomfortably close to blows. The Turks were attacking Kurdish forces allied to the US, and on one occasion American units were threatened by incoming Turkish artillery fire, although fortunately there were no casualties – almost certainly a case of good luck rather than good management. I have made the case before that NATO is not only redundant with the USSR gone but is a liability in geopolitical security terms (“Are we better off with or without NATO?”, Breaking Views 4 February 2017). The current situation in northern Syria reinforces this view. Moscow has reined the Turks in for the time being but imagine the prospect of a falling out and further military action being taken by Ankara on Syrian soil; Russian forces become involved, the fighting spills over the Turkey/Syria border and Turkey calls on its NATO ‘allies’ to come to its assistance. I can say with complete confidence that the Western European members of NATO most certainly would not heed the call, and I doubt whether any of the others would want to become embroiled. We are fast approaching the point where the NATO ‘alliance’ is not worth the paper it’s written on. Dump it!

I often discuss geopolitics with a French-educated Lebanese chemist. He had told me a few weeks earlier that Lebanon was ‘safe’ because the US had ‘drawn a red line’ when it came to Lebanese national security. After the Yanks did the dirty on the Kurds, I asked him whether he was still confident about that assessment. He glumly shook his head. “What I’d do if I were you Lebanese,” I genially advised him, “is develop a taste for vodka and cosy up to Moscow.” Having competing benefactors can be very useful (see my article (“The return of the Cold War – the upside”, Breaking Views 1 February 2016). There are quite a few older Lebanese professionals particularly in the biomedical field who qualified in Moscow or Kiev during the Cold War era – if they play their cards right, we may be seeing a resumption of those scholarship programmes in the near future!

The problems for Syria will lie in the other direction.. America will occupy its oil wells and won't care about the politics of ISIS or Turkey, so long as they have the oil!

I’m not advocating an isolation policy. We can and should keep active treaties with nations that are good partners. We should ditch those that take unfair advantage of the relationship.

Europeans sincerely believe that Americans are obliged to protect them. If you babysit a child, he will grow up an evil egoist. This is what we see in Europe today.