Barend Vlaardingerbroek: COVID-19 as a candidate for conspiracy theories 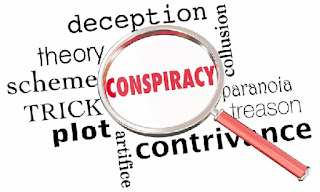 Conspiracy theory – the theory that an event or phenomenon occurs as a result of a conspiracy between interested parties; spec. a belief that some covert but influential agency … is responsible for an unexplained event. - Oxford English Dictionary

In a Sydney pub one day in 1983 I was engaged in conversation by an elderly man who informed me that the minerals supposedly exported by Australia to Japan actually originate in Japan from where they are transferred through submarine pipes to Aussie only to be sent back, the purpose of the deception being to create the impression of two-way trade to ensure Japanese domination in the Australian consumer market in vehicles and electronics.

He did not appear to be drunk so I thought he was either nuts or was pulling my leg. When I subsequently told some Australian colleagues about it, I was met with embarrassed head-shaking and chuckles. This yarn was apparently spun by numerous older people, and they seriously believed it.

This wacky contention is one of a great number of so-called conspiracy theories. Others include the UN being an instrument by which some sinister group such as the Freemasons or the Illuminati are going to impose a world government, and a cure for cancer that the drug companies long ago banded together to prevent from being released. Most conspiracy theories are in the realm of Cloud Cuckoo Land, but there are those that deserve a second look. After all, we do live in a world where all sorts of people, including not-so-nice ones in high places, do indeed ‘conspire’ to lord it over us and pull the wool over our eyes to prevent us from seeing what is really going on.

Conspiracy theories rely on arranging what appear to be firm facts in such a way that they become parts of a narrative the plot of which has been predetermined. To use another analogy, the facts are arranged in jigsaw-puzzle fashion in such a way that the ‘big picture’ that has already been decided upon begins to materialise. There is a glaring tautology in this reasoning. In plain language, it is fitting the facts to the theory and it then becomes a self-fulfilling prophecy that the facts will appear to lead to the foregone conclusion. The underlying fallacies are usually easy to see through, but some of these theories are very sophisticated. The better they hang together, the more difficult it becomes to unpick and expose them – and the more plausible they become, especially when set against alternative narratives that are no more convincing.

A superb example is the case put by journalist Ed Hooper in 1999 in a mammoth work entitled ‘The River – A Journey to the Source of HIV and AIDS’. To cut a very long story (over 1000 pages with hundreds of footnotes) short, HIV originated in a Belgian medical research installation in the Congo in the 1950s when, in the race for a polio vaccine, corners were cut by using chimp tissues as attenuation media. The simian precursor of HIV mutated to the human pathogen in one batch, and was then spread to humans through early vaccine trials, only AIDS wasn’t diagnosed as such until it hit the West decades later. There has been a huge cover-up which has included a smokescreen of misinformation with regard to the origin and spread of HIV.

According to the favoured ‘cut hunter’ hypothesis, a man hunting chimps had cut himself while slaughtering a carcass and thereby picked up the simian virus which he then proceeded to spread in mutated form. It may be the establishment theory, but the fact of the matter is that there is not a shred of hard evidence for it; it is pure conjecture. So is the case put in ‘The River’; gargantuan a work as it is, there is no ‘smoking gun’ presented. Thus we are left with two competing narratives both of which are perfectly credible but lack solid evidence – evidence which, at this stage of the game, would be impossible to procure as we are dealing with one-off events that happened a long time ago.

Let us move from chimps to bats. Bats that live in the Wuhan area carry a virus similar to COVID-19. These may be transferred to wild animals who may then end up in ‘wet markets’. Perhaps we move from a ‘cut hunter’ to a ‘cut vendor’ or ‘cut customer’, with the mutated bat virus jumping the species barrier. Again, there is not a scrap of hard evidence for this having occurred. Indeed the circumstantial evidence for this hypothesis is weak, as some people traced to the initial outbreak had had no contact with that ‘wet market’ or with people who frequent it.

Enter the Trump administration and the allegation that COVID-19 originated in a virological lab a few blocks away from the aforesaid market and the Chinese have been engaged in a cover-up ever since. This is an entirely believable narrative. A boo-boo at a lab like that resulting in a pathogen getting out is highly embarrassing for any government, which will subsequently do its damnedest to muddy the waters.

We now enter a spiral that many conspiracy theories go into. How did a bug like that come to be in the first place? As opposed to a spontaneous mutation, it could have been engineered as a biological weapon. We have all been assured that it was not man-made, of course… says who? The WHO, that’s who (amongst other ‘experts’). Oh yes, they’re the ones who lavished praise on the communist regime for acting so quickly and responsibly, aren’t they (wink, nod, nudge).

Another upward-and-outward twist of the spiral and we are looking at a deliberate act on the Chinese government’s part in releasing a ‘Satan bug’ with a view to crippling the economies of its Western rivals, or maybe bumping off most of their populations. We are now entering crackpot conspiracy theory territory. Whether people believe the more far-fetched theories of the genre tends to depend not on the critical appraisal of the case put but on ideological motivation. Yes, we all know the medical establishment are a load of crooks who lie to us all the time, so Ed Hooper must be right; yes, we all know the Beijing regime are a load of you-know-whats who wouldn’t think twice about using millions of innocent people as sacrificial lambs, so Trump must be right. Only this really isn’t being rational any more, is it?

When asked whether one believes a particular theory of this type, many people feel that they must answer in the affirmative or the negative; and that if they opt for the latter, they must furnish their response with robust proofs. Not so. Not believing something is not the same as believing it to not be so. To not believe an assertion in the absence of belief in a competing notion is non-committal; you need offer no positive proof against it or in favour of an alternative narrative. This is not a cop-out but a considered position. I, for one, am content to admit that I simply don’t know; I do not have the requisite data to come to a decision and will therefore defer judgement. And in the case of HIV and COVID-19, I suspect I shall be deferring judgement for ever, for the one thing we can be certain of is that both sides will avidly ‘conspire’ to present their evidence in such a way that it reinforces their respective cases.

That is a good, mature view, as would be expected of one-such. Nevertheless, as a 'Contingent Conspiracist' it seems to me that the argument,, 'plot the curve first and fit the data later' runs the risk of becoming a refined version of the knee-jerk response "Conspiracy theory". The essential point must always remain, keep collecting the evidence until such time as the conclusions present themselves for all to see. My philosophy is this;
Truth takes no prisoners, defends nothing,
Is innocent perception, the Way of knowing.
Love is Truth in action.
RE