After having researched the Maori social situation for many years, I fell afoul of the demand for political correctness within the growing grievance industry and set out to understand what had actually happened.

A simple analysis of the Maori population in the nineteenth century (which was turned down by the NZ Population Review as it dared to suggest that Maori benefitted from the Treaty of Waitangi) led on to a series of books on early Maori history and culture.

When I recently read the accurate and perceptive Dom Post article by Karl du Fresne, “Racial division in New Zealand is ‘permanently built in’” (May 28 2020), I decided to write a short note of appreciation.  I commented that, to me, racism implies simply (a) belief in race, which is explicit in New Zealand law (“A Maori is a member of the Maori race”) and (b) differentiation by race, which is made clear in such a great number of New Zealand laws and statutes.  So New Zealand is fundamentally racist with separation by race built on a total reinvention of the Treaty of Waitangi.

The ready point of contact was the NZ Centre for Political Research; Muriel Newman passed on the note and invited me to send an article that could be a Guest Commentary.

I am afraid that my first effort broke one of my own rules, to understand the point of view of an ally who holds very many different political beliefs, and to focus on common ground.  As a socialist, my political views differ from many in NZPCR newsletters.

One important point that can be salvaged from that draft is that the separatist movement and associated grievance industry have thrived for many decades under both Labour and National governments.  I would emphasise the shift of the previous National government with their decision to reverse previous policy and bow to its confidence and supply partner in Parliament, the Maori Party, with an agreement to support the United Nations Declaration on the Rights of Indigenous Peoples (which espouses different rights similar to those of the pigs in Animal farm) despite the previous Labour government’s warnings that the document was fundamentally incompatible with New Zealand’s constitutional and legal systems, together with the many absurd settlements by Treaty Minister, lawyer Christopher Finlayson, who had previously acted for Ngai Tahu in their Treaty claim, fighting against the government through a series of high-profile court battles.  Muriel Newman points to the way that the current Labour government has aggressively and officially embraced a “partnership” agenda, contradicting the equal citizenship of Article 3 of the Treaty of Waitangi.  I share the disgust on the resulting race-based funding and organisation for the post-Covid recovery.

We know that our views on many things differ, but there is considerable agreement here.  We have a similar desire to try to halt the march of the Maori elite to sovereignty, by exposing what is going on.  Here is a section of my first draft where we agree.

Gaps between Maori and non-Maori in New Zealand have continued and even widened since the 1980s, within a consensus that is now followed by both Labour and National governments.  “The focus has been on false claims of colonial wrongdoing with the conscious generation of race-based grievances, ignoring evident class differences.

Two major points here point to a cross-party consensus:
Maori leadership, which has often proven key in determining which of the two major parties becomes government, has focussed on gathering influence and wealth for the tribal elite and has failed to tackle the poverty of those Maori who belong to the new underclass (which is determined by need and not by race).

The social experiences of any group are determined by many influences, including those resulting from such experiences.  A further note will explain the impossibility of separating social statistics by class and ethnicity, as the mathematical modelling used fails when there are considerable linkages and interactions between the many measures and experiences.  It will also tell how science in New Zealand has lost any independence and must now bow down to Maori supervision.”

The situation that I describe is familiar to followers of the NZ Centre for Political Research.  So is the great difficulty in making a chink in the armour of conventional wisdom racism.  This has led many to angry and extreme cries of rage, which can be counter-productive.  Like others, I constantly have to hold myself in check and try to express ideas and facts calmly.  My frustration shows in a recent submission concerning the COVID-19 Recovery (Fast-Track Consenting) Bill.  These submissions take time to prepare but will be quickly set aside by the Parliamentary Committee.  Why not make use of that effort and report the arguments elsewhere?  Here it is.

“We are all in this together.  We are getting through the pandemic as one people.  But we are not one people.

“The equality promise by this bill is that of Animal Farm, ‘where some animals are more equal’, with special position and added rights and powers.  Those who are not pigs have less equality, which is no equality at all.  I object to being a second-rate citizen in my own country.

“We all, every one of us, vote for local bodies.  Local authorities nominate one person to a panel.  Maori have a full say in election of those local authorities.

“Maori have an additional second vote, with one person nominated as the representative of the relevant iwi authorities.  Here is double the representation based on race (see the definition of Maori in legislation).

“Additionally, each committee must follow the dictates of an unclear Maori culture, which has changed considerably since 1840, which differs between tribes, which is never made clear to the rest of us.  Thus, ‘the members of a panel must have expertise in tikanga Maori and matauranga Maori.’  This is no common meeting ground.  My culture is missing, to be ignored by the gatekeepers of political correctness.  Again, I, like so many others, am a second-class citizen.  That should not be so.  We should be one people.

“End this racism, this arrogant separation into two peoples based on race.”

As well as criticising foolish actions and correcting false narratives we can join together to suggest a better way forward, by celebrating peace rather than talking always of conflict.  That spirit was expressed in a 2009 article in the Dominion Post, “Chance to create an island of peace”, which was unfortunately negated by the handing over of that island, Taputeranga in Island Bay, to Ngati Toa in 2010 as a reward for killing the people who were sheltering there (never mind that it was Ngati Mutunga who drove the Ngati Ira out).  That decision by Finlayson is one reason why I despise him.
It can be taken up again today, spurred on by the sad decision in Hamilton to remove a statue of Captain John Hamilton

There is positive action that can be taken, which is to celebrate the coming together of two formerly very different people to form this nation, with enmity and war replaced by peace-making and friendship.  This is nowhere made more clear than in the monument at Kihikihi erected by Sir George Grey in honour of his former bitter foe, and now friend, Rewi Maniapoto. 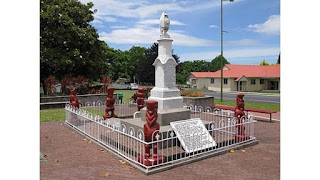 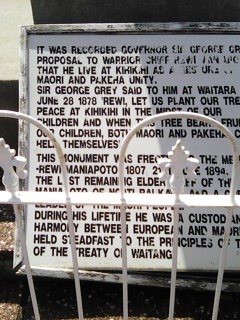 We are now free to travel, and to see our country.  Instead of removing a statue in the face of threats, the people of Hamilton, led by their council, should organisation a ceremony of remembrance and celebration at Kihikihi, and gather before that monument to friendship.

We must stop the hatred and consider the forgiveness expressed there; refuse to submit to bullying and instead establish a more positive mood, to go forward together.  Here is a wise use of that freedom, reminding us of the full story of the past, bringing to mind the rather than focussing on grievance.

Perhaps the NZ Centre for Political Research could organise and publicise such a ceremony.  Visitors can have a good day out, and take the opportunity of visiting a number of former battle sites around Kihikihi, including the orchard and church at Rangiaowhia where General Cameron saved many lives, British, New Zealanders and rebel Maori, by refusing battle at three mighty forts and instead marching around to capture the rebel food supplies.

Dr John Robinson is a research scientist, who has investigated a variety of topics, including the social statistics of Maori.  His recognition of fundamental flaws in the interpretation of nineteenth century Maori demographics led him to consider the history of those times in several books.