The European Union’s proposed carbon border charge is essential to the survival of its own industries and the bloc will impose the levy on non-EU competitors unless they commit to lowering their emissions, the bloc’s climate policy chief said on Monday (18 January).

The EU’s executive Commission is expected to propose its carbon border adjustment policy before the end of June.

“It’s a matter of survival of our industry. So if others will not move in the same direction, we will have to protect the European Union against distortion of competition and against the risk of carbon leakage,” European Commission Executive Vice-President Frans Timmermans told an online event hosted by consultancy Global Counsel.

“Carbon leakage” would occur if companies left Europe to avoid the cost of its emissions-cutting policies.Globally, industry is under pressure to ramp up climate action ahead of a United Nations summit in November, which serves as a deadline for nearly 200 countries to pledge deeper emissions cuts.

If that meeting fails to deliver, the EU will press ahead with unilateral carbon border measures, Timmermans said.

Germany’s agriculture ministry is pushing for a carbon adjustment mechanism at EU borders to ensure that climate action in the bloc’s farming sector doesn’t endanger farmers’ livelihoods and cause carbon leakage. 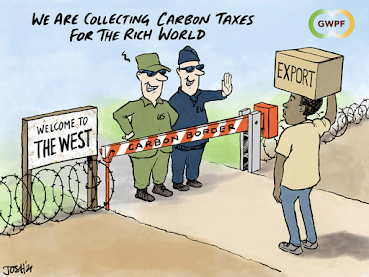 Germany can only achieve so much in trying to decarbonise its agriculture sector because its farmers are facing international competition, state secretary in the Federal Ministry for Food and Agriculture (BMEL) Beate Kasch said at an event on Tuesday during the agricultural trade fair International Green Week, held digitally in Berlin.

The agriculture ministry was investing billions of euros to run pilot schemes on CO2 storage in humus layers and by re-wetting moorlands – “but this has to go hand in hand with a carbon border adjustment”, she added. It’s not a good development if the EU has a healthy and climate friendly agriculture sector but consumer habits remain the same and are met by cheap imports, she said.

Rich nations have exaggerated how much funding they provided to help the world’s poorest countries cope with climate change impacts such as flooding and drought, according to analysis by charity Care International.

A close reading of 112 projects representing 13% of global adaptation finance in 2013-17 found the 25 donor countries collectively overreported the amount supporting climate adaptation by 42%.

Under the UN climate process, the developed world has committed to mobilise $100 billion of climate finance a year by 2020, with a balance between mitigation (carbon-cutting) and adaptation projects. At the last count in 2018, they delivered $16.8 billion in adaptation finance, according to the OECD – but if overreporting levels persisted, the true amount could be less than $10bn, Care said.

“It really shows that rich countries are not as concerned about living up to their climate commitments as they should be,” John Nordbo, report co-author and senior climate advocacy adviser at Care Denmark, told Climate Home News.

Structural challenges pose a threat to the competitiveness of Germany as a business location for the automotive industry, Deutsche Bank writes in a monitoring report.

Climate policy regulation of the automotive sector is triggering “the biggest structural break in the industry in decades,” the author writes. Strict CO2 limits for new passenger cars in the EU for 2021 as well as for 2030 mean that manufacturers will have to bring more electric cars to the market. The resulting increase in costs will likely have a negative effect on value creation and employment in the automotive industry in Germany, the report states.

The CO2 limits chosen by the EU for passenger cars and the subsidies for electric cars on a national level are “extremely inefficient (expensive) and hardly effective instruments” to achieve emission reduction in the transport sector, Deutsche Bank argues.

The new boss of Vauxhall has warned that its car production plant in the UK is at risk from the government’s Net Zero plan to ban the sale of petrol cars by 2030.

The future of Vauxhall’s UK car production will depend on government support after the “brutal” decision to ban the sale of new petrol and diesel cars from 2030, according to the boss of Stellantis, the newly formed carmaker…

Carlos Tavares, installed as Stellantis chief executive after leading Peugeot into the merger, said a final decision on whether to invest in production of a new car at Ellesmere Port will be made “within a few weeks”. He added a clear warning that the future of UK production “depends on the UK government’s willingness to protect some kind of an automotive industry in its own country”….

Tavares suggested the UK ban on petrol and diesel cars had made it more difficult to invest in the Ellesmore Port plant in the Wirral, even though the Brexit deal reached on Christmas Eve removed the threat of tariffs or quotas on most car exports from the UK. There are about 1,100 workers at Ellesmere Port manufacturing the Astra car.

A legal challenge to the UK government’s approval of a new gas-fired power plant has failed in the court of appeal. 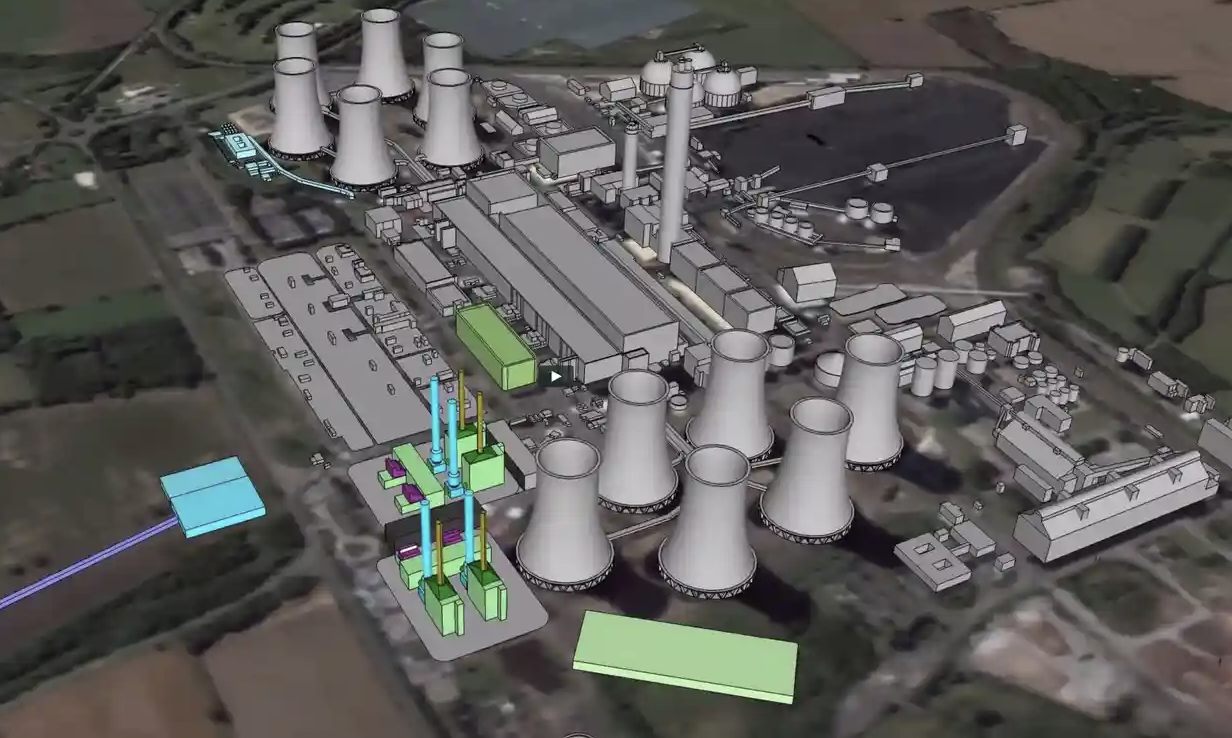 The challenge was brought after ministers overruled climate change objections from the planning authority. The plant is being developed by Drax in North Yorkshire and would be the biggest gas power station in Europe. It could account for 75% of the UK’s power sector emissions when fully operational, according to lawyers for ClientEarth, which brought the judicial review.

In 2019 the Planning Inspectorate recommended that ministers refuse permission for the 3.6GW gas plant on the grounds that it “would undermine the government’s commitment, as set out in the Climate Change Act 2008, to cut greenhouse emissions [by having] significant adverse effects.”

Andrea Leadsom, the secretary of state for business, energy and industrial strategy at the time of the planning application, rejected the advice and gave the project the go-ahead in October 2019. The high court rejected ClientEarth’s initial legal challenge last May.

The UK is under international scrutiny as it prepares to host a UN climate summit in November. The country has cut its carbon emissions by 41% since 1990 and in 2019 was the first major economy to put into law a commitment to reach net zero emissions by 2050. Boris Johnson produced a plan for a “green industrial revolution” in November.

But the government has been criticised for failing to stop a new coalmine in Cumbria, which it said was a local issue. This comment was derided by campaigners, and MPs warned it undermined the purpose of the Cop26 summit. Another, smaller gas plant is under construction by SSE in Lincolnshire.

Some of world’s largest economies are still behind on greenhouse-gas reduction targets, five years after signing the Paris Agreement 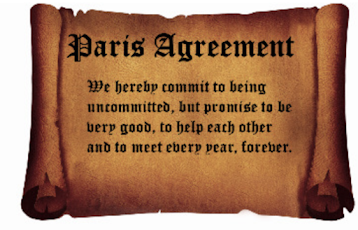 President Biden’s move to rejoin the Paris climate accord within hours of his inauguration was welcomed by world leaders, but meeting the U.S.’s commitments to reduce greenhouse-gas emissions promises to be challenging.

Mr. Biden has pledged to take significant steps to address what he has described as a climate-change crisis. He proposed to limit power plants’ emissions in the short term and set the industry on the path to becoming carbon free by 2035. On his first day, he took steps to limit the oil-and-gas industry’s methane emissions and he has vowed to boost electric-vehicle adoption by adding 500,000 new charging outlets by 2030.

Those actions could face judicial challenges and pushback from industry groups that represent certain fossil-fuel interests. Pursuing his agenda also will require Mr. Biden to obtain, in some cases, congressional approval or changes to tax law. His infrastructure package also could help re-establish the U.S. as a leader on climate initiatives, but enacting this ambitious legislation could be difficult after asking Congress to approve considerable expenditures to fight Covid-19.

China and other nations have recently increased their pledges to do more to tackle climate change, and corporations are heavily investing in the technology needed to run the global economy with fewer greenhouse-gas emissions.

But global emissions continue to rise, and groups tracking progress question whether many of the countries that have signed the Paris agreement are currently on track to hit the targets they set to reduce their share. 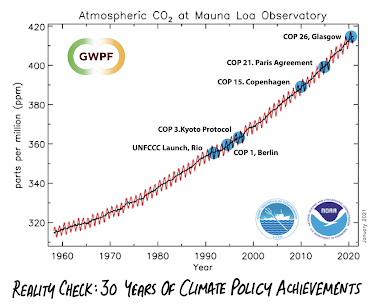 Scientists have discovered the DNA of some 2,100 kinds of plants and 180 animals — including American horses and woolly mammoths – dating to thousands of years after their supposed extinction. 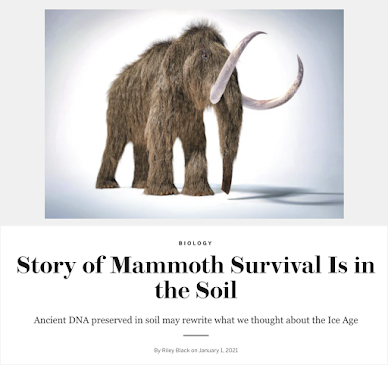 One of the most popular theories for the extinction of the wholly mammoth and other so-called ‘megafauna’ that roamed the wilderness during the Pleistocene is the claim that rapid global warming at the end of the last Ice Age killed off these species.
The idea that global warming rather ‘overkill’ by human hunters was chiefly responsible for the disappearance of the mammoth has gained in popularity in conjunction with claims that humans today are facing the same fate due to the same alleged catastrophe.

Paleontologists have been arguing for decades what may have caused these species to vanish. For much of the second half of the 20th century the ‘overkill hypothesis’ dominated the scientific debate, claiming that the post-glacial expansion of human populations into their habitats led to the overhunting and gradual destruction of these species.

With the rise of climate catastrophism, a growing number of studies attempted to show that global warming rather than humans were primarily responsible for the disappearance of these Pleistocene species.

Now, a team of paleogeneticists have discovered DNA of “about 2,100 kinds of plants and 180 animals—including American horses and woolly mammoths, in samples from soil dated to thousands of years after their supposed extinction.”

Once this new discovery can be confirmed, the whole idea of an abrupt climate catastrophe wiping out the wholly mammoth and other Pleistocene species in one fell swoop is likely to go the way of the Dodo. 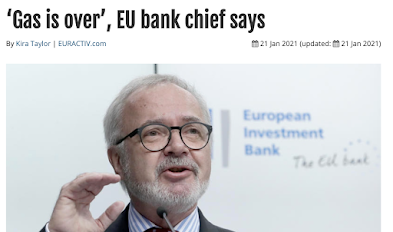 For years, the struggle to finish Nord Stream 2 has pitted Washington against Moscow and divided Europe. Now, a small German state has stepped into the fray with an unusual move: forming an environmental foundation to help finish the gas pipeline.

Mecklenburg-Western Pomerania (MV), along Germany’s northeastern coast, is home to the logistics hub and endpoint of the embattled project that is almost completed but stalled for more than a year by US sanctions.

This week, MV launched the Climate and Environmental Protection Foundation with €200,000 of state funds and €20m from the pipeline project, owned by the Kremlin-backed Gazprom gas group.

Nord Stream 2 opponents are baffled as to why one of Germany’s least populated states would publicly defy powerful US sanctions. German environmentalists, meanwhile, accuse the state of “greenwashing” its role in a geopolitical struggle that has nothing to do with climate change.

“A foundation claiming to promote environmental protection should not be founded by a fossil fuel project,” said Theresia Crone, an activist who organised a protest and petition with more than 24,000 signatures against the foundation.