A woman’s right to procure the termination of an unwanted pregnancy is one of those social issues that polarises societies. As with most hotly contested social issues, both camps on either side of the divide are ‘right’ in the sense that their cases are rational and logical given their central premises.

These premises, however, arise from ideology and values rather than from hard empirical considerations. Hence the twain can never meet, and the issue will remain a polarising one forever. Unless and until, that is, someone comes up with an alternative that satisfies the requirements inherent in the central premises of both opposing parties. 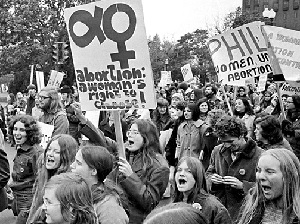 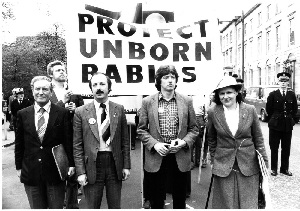 This argument has been going on for a long time. Now, at last, there is a way to satisfy both demands – in theory at least.

Can there be such a third position between ‘pro-choice’ and ‘pro-life’ that gives both sides what they want? Until recently, I would have said ‘no’. And then I came across just such a stance, and slapped my forehead wondering why I hadn’t thought of it myself. So will many of you.

The suggestion has been made by a couple of Canadian PhD (in Philosophy) students, Eric Mathison and Jeremy Davis, that we uncouple a woman’s right to choose to not be pregnant from her until now concomitant implied right to have the foetus destroyed. The journal ‘Bioethics’ published their paper “Is there a right to the death of the foetus?” in February this year. The authors are more interested in the moral angle than in practical applications, but noted that we are close to being able to enact this principle by removing an unwanted foetus and transplanting it into a host uterus, whether natural or artificial, so that it can complete its development and emerge a baby at the appropriate time.

For the ‘pro-choice’ crowd, the rub is the extension of the recognition of legal personhood to a foetus, thereby giving it human rights (in this instance, the right to life). The ‘pro-choice’ lobby has always vehemently denied that a foetus is a ‘person’ in the legal (or any other) sense, and has adamantly made the case that it accordingly has no rights whatsoever.  It would be a huge come-down for a strident ‘pro-choicer’ to concede that the unborn child is entitled to a life, and hence a concession few would be prepared to make.

Some ‘pro-choicers’ might be okay with women having a choice of whether their unwanted child is transplanted into a host uterus or is destroyed, but that would defeat one of the dual purposes of the proposal, which is to protect the unborn from destruction, so it’s a non-starter.  But a pro-choice zealot will not surrender the woman’s right to determine the fate of the foetus  – thereby rejecting the moral basis of Mathison and Davis’ case, which is that she does not have a right to insist on the destruction of her unborn child.

One would expect the ‘pro-life’ camp to be much warmer to the idea, but that is not the way it seems to be panning out. Most ‘pro-lifers’ are people who believe in the traditional natural family, and any deviation from that norm makes them squirm. This includes surrogacy, so the suggestion that a foetus be implanted into a surrogate doesn’t go down well at all, and as for an animal or artificial host womb, that’s a Frankensteinian horror to them.

Underpinning the ‘pro-life’ stance is a yearning for a return to the domestic simplicity of yesteryear in which boy met girl, they married and had babies as a matter of course. They believe that a woman who gets pregnant has a duty to carry the child to full term, and that a child has a right not only to life but to both a father and a mother, preferably the ones who brought it about.

What all this goes to show is that the abortion debate is about much more than abortion. It represents a clash of world views and their associated ideologies based on fundamentally disparate central premises. Those opposing world views are actually more important to most antagonists than the issue of abortion itself. We have here yet another instance of the ‘culture wars’ that have created an active fault line in Western society.

For me personally, abortion has long been in the ‘too hard basket’ and I have shied away from involvement in the controversy as I identify with neither camp while understanding perfectly well where both are coming from. I am totally sold on the proposal that we allow women to terminate pregnancies while allowing the child to live – at the ethical/moral level.

Alas, when I don my pragmatist’s cap I see a few daunting practical problems with the implementation of this idea.  Looking at the surrogacy option, transplanting an embryo (as in ‘full’ surrogacy) is one thing, but transplanting a 3- or 4-month foetus is quite another. Still, let’s be optimistic and assume that a way is found to do this (which I’m sure there is, given research funding). But now the numbers game kicks in. Let’s use NZ as an example. On the basis of 2015 data from Statistics NZ, we are looking at the need for about 13,000 host wombs a year. Finding 13,000 surrogates is a bit of a tall order – I’m being facetious. So we have to look at the animal or artificial womb concept, but we’re technologically nowhere near that yet, and active development in this area is going to run into a storm of objections from various sections of the community.

Let’s press on notwithstanding and imagine those 13,000 babies currently being aborted are born one way or another. What then? Adoption has fallen out of favour, but even if it were to return to past levels, it would only solve part of the problem. Adoption in NZ peaked at just over 2,600 in 1968. We would be looking around 4,500 at that rate today – about a third of those 13,000 (not that it’s going to happen anyway). What do we do with the rest – stick them in orphanages? Yes, I thought that would go down like a lead balloon. Bright ideas, anybody?

If we’re going to use surrogates to carry aborted babies to term, we’ll have to change the law which currently regards a surrogate as the child’s mother even if the two are unrelated, otherwise the surrogate will be lumbered with the child. This aspect of the law is an anachronism in the light of ‘full’ surrogacy anyway. But it’s yet another hurdle.

A delicate associated issue is the right of aborted/transplanted children to know about their biological origins when they get older, akin to children who were given up by their mothers for adoption. “I want to meet the woman who had me aborted” doesn’t quite have the same ring to it as “I want to meet the woman who gave birth to me and gave me up for adoption.” An awful lot of biological mothers who terminated those pregnancies would presumably reject an approach from their aborted child to ‘get to know one another’. If knowing one’s true parents were to become a right, however, these objections would be overridden. Either way, a potent brew of frustration and resentment is being concocted here.

Perhaps the knowledge that abortion was no longer a simple matter of ‘out of sight, out of mind’ would make women a bit more careful about ending up with an unintended bun in the oven. Many a woman who has had a foetus removed from her and implanted elsewhere will spend the rest of her life wondering how the child turned out. That thought just might encourage her to take that pill or get an IUD fitted, or whatever, before indulging in potentially procreative activities.

It would be difficult to spur the law-makers into action to get things moving towards translating this idea into everyday reality. In most Western countries, the abortion industry is humming along nicely to the satisfaction of all involved – the medibusiness operators offering the service, and the women seeking it. Why complicate matters by considering the interests of the unborn? Think of the possible feminist backlash and how that would translate into lost votes.

The suggestion that aborted babies should be enabled to complete their development and be born outside the body of the woman who conceived them hits all the right ethical/moral buttons with me for one, but the practicalities are extremely challenging. Still, I think we as a society should have an open discussion about it. In the final analysis, though, what it all comes down to is people being lax about taking precautions to avoid unwanted pregnancies. If it wasn’t for that, we wouldn’t need a discussion about all this in the first place.