Today, I have one video on another important principle of taxation. To set the stage for this discussion, here are two simple definitions:
These definitions are important because we want to contemplate why and how a tax cut helps an economy, but let’s start by explaining that a tax cut doesn’t boost growth because people have more money to spend.

I want people to keep more of their earnings, to be sure, but that Keynesian-style explanation overlooks the fact that the additional “spending power” for taxpayers is offset when the government borrows more money to finance the tax cut.

Instead, when thinking about taxes and prosperity, here are the three things you need to know:
All this is completely correct, but there’s one additional point that needs to be stressed: The tax rate that matters is the marginal tax rate, not the average tax rate.

But I also included an example that’s more relevant to the rest of us, looking at our aforementioned hypothetical taxpayer with a 20 percent average tax rate on annual earnings of $50,000. I asked about incentives for this taxpayer to earn more money if the marginal tax rate on additional income was 0 percent, 20 percent, or 100 percent.

Needless to say, as shown in my simple illustration, the incentive to earn $51,000 will be nonexistent if all of the additional $1,000 goes to government.

Here’s a very short video primer on this issue:

One very important implication of this insight is that not all tax cuts (or tax increases) are created equal. For instance, as I explained in a three-part series (here, here, and here), there will be very little change in incentives for productive activity if the government gives you a tax credit because you have kids.

But if the government reduces the top tax rate or lowers the tax bias against saving and investment, the incentive for additional productive behavior will be significant.

And this helps to explain why the country enjoyed such positive results from the supply-side changes to tax policy in the 1920s, 1960s, and 1980s.

Let’s close with some good news (at least relatively speaking) for American readers. Compared to other industrialized countries, top marginal tax rates in the United States are not overly punitive. 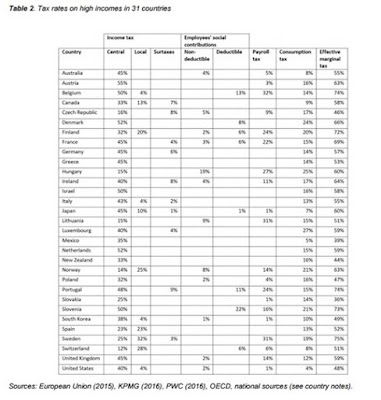 Admittedly, this is damning with faint praise. Our tax system is very unfriendly if you compare it to Monaco, Hong Kong, or Bermuda.

But at least we’re not France, where there’s a strong argument to be made that the national sport is taxation rather than soccer.

P.S. I’m not saying tax preferences for kids are wrong, but I am saying they’re not pro-growth.

P.P.S. I mentioned above that Cam Newton—based on his personal finances—lost the Super Bowl even before the opening kickoff. Well, there’s scholarly evidence that teams in high-tax states actually win fewer games.

P.P.P.S. Today’s analysis focuses on the individual income tax, but this analysis also applies to corporate taxation. A company with clever lawyers and accountants may have the ability to lower its average tax rate, but the marginal tax rate is what drives the incentive to earn more income, which is why reducing the federal corporate rate from 35 percent to 21 percent was the best part of last year’s tax bill.

Daniel J. Mitchell is a Washington-based economist who specializes in fiscal policy, particularly tax reform, international tax competition, and the economic burden of government spending. He also serves on the editorial board of the Cayman Financial Review.

This article was originally published on FEE.org. Read the original article.

Whilst I get what Dan is saying, I also think he has a slightly one eyed view of things. The gap between the rich and poor is outrageous in this country and believe me I've seen both sides of it. I came from nothing and I mean nothing. I also have some very wealthy friends. I know what leveraging is and I've experienced what is regarded as poverty, although at the time I didn't see my life style as poverty stricken, I just saw it as normal and I knew I had to start at the bottom if I was ever going to get anywhere. This was made much worse by having a learning difficulty which meant I would never be an academic. Since that time I've managed to claw my way well out of that trap but it was only because I busted my gut putting whatever surplus income I could muster into property and I managed to catch a couple of good waves. I take no real pride or satisfaction from that form of wealth however and I would far rather have made it from my sound company that the government kindly hamstrung no less than five times by moving the goal posts!

Its a fact of life that if you give the poor money it is very unlikely that they will be able to hold onto it for very long and it will quickly flow back into the great money go round anyway. Therefore it will end up back into the coffers of the companies in fairly short order. If the poor have more to spend the productive sector sells more and if they sell more, they make more profit and if they make more profit, they pay higher wages and then everyone benefits surely? Money gets spent, that's the whole idea.
I have always felt that one of the best ways we can boost productivity is by instigating a flat tax regime so the people are not continually forced into a decentivising soul destroying higher taxation bracket.
Paying people to have kids at least makes it easier to have them and if we don't breed more Kiwi's the time will come when we are the minority in our own country, which also follows that eventually we will be the minority party in parliament.
So I do think there are two sides to the argument, but attempting to tax your way out of difficulty, is like standing in a bucket and trying to lift yourself up by the handle! Lets try and make people want to work.