Jim Rose: Zero-carbon economy may not be worth the cost

Before we decide if a zero-carbon economy by 2050 is worth the cost, we must know what the damage to our economy from global warming will be if we do nothing. Only then will we know how important and urgent action on global warming really is.

Estimates of the cost of global warming as a percentage of GDP to New Zealand are elusive. I drew a nil response when I asked for that information from James Shaw, the Minister for Climate Change, and from the Ministry for the Environment. Both said such an estimate was too hard to calculate.


Fortunately, the OECD rose to the challenge in its 2015 report on The Economic Consequences of Climate Change. The OECD estimated the cost of global warming to New Zealand and Australia between now and 2060 was a reduction of 0.9 per cent in their GDPs (see graphic). 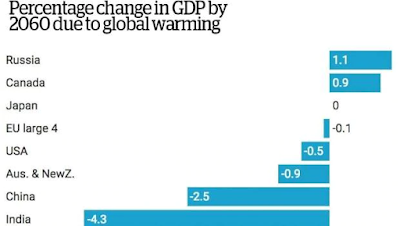 Source: The Economic Consequences of Climate Change - OECD 2015
Percentage change in GDP by 2060 due to global warming.

Some countries such as Russia and Canada gain from global warming. The cost to even China is small. The cost of global warming over the next few decades to Japan and the four largest EU member states is trivial!

About 1 per cent of GDP lost between now and 2060 is in the middle of the range of estimates of the cost of global warming to the entire planet as estimated in reports by the International Panel on Climate Change (IPCC). There are more than 20 different estimates by academics of the worldwide cost of global warming between now and 2100 and they range between 1 and 3 per cent of GDP lost.

The larger national estimates are for developing countries because much more of their economies are agricultural or otherwise outdoors and more susceptible to worsening weather. Even then, the rapid economic growth in many developing countries makes losing maybe one or two years' economic growth not that important when your income per capita is doubling or more, sometimes by much more, such as in China or India, every generation.

It is time for the Government to fund an estimate of the cost of global warming to New Zealand.

Unilateral action to mitigate warming in a small country such as ours will not make any difference to the pace of global warming. Unless most all countries introduce a hefty carbon tax, including developing countries at great expense to their own development, unilateral action is worse than doing nothing.

Those countries who acted unilaterally will be poorer and thus less resilient against such global warming that is inevitable because of the lack of fully global action. Richer is safer.

No country will have a road to Damascus on fighting global warming because New Zealand puts on a hair-shirt in the name of making a tiny, tiny difference to global warming by adopting a zero-carbon economy by 2050.

We are too small to make any difference to the global pace of climate change, and few voters are influenced by what foreigners do for better or for worse. Democratic politics is such that significant reductions in real incomes in the name of unilaterally fighting global warming are politically unsustainable in the long term.

There are many voter concerns that politicians must balance to stay in office and the environment is but one of these. Once climate change policies start to become costly in the hip-pocket, voter support for these policies will fall away.

The world is not short of Tony Abbotts willing to campaign against the hip-pocket cost of a carbon tax. Much of the unilateral national efforts to reduce carbon emissions will be limited to modest reductions of a largely token character.

The environmental movement should stop saying that half measures will work and the transition to a green economy will be easy and painless. But a message that a green economy and action on global warming requires blood, toil, sweat and tears will not sell at the ballot box.

Jim Rose is an economic consultant and former Treasury based in Wellington. He blogs at www.utopiayouarestandinginit.com. This article was first published HERE.