Barend Vlaardingerbroek: ‘Innocent until proven guilty’ – except when a woman accuses a man of sexual misconduct

A prominent theme of the ‘Me Too’ movement is the need to ‘believe’ a woman who accuses a man of sexual misconduct – the man should be presumed to be guilty, thereby turning the presumption of innocence, one of the pillars of civilised law, on its head.

The principle of the presumption of innocence has its origins in the writings of Western European (French, Spanish and Italian) jurists but flourished mainly in the English system of law where it manifests itself in the need for the prosecutor in a criminal case to prove the charge beyond reasonable doubt. The expression ‘innocent until proven guilty’ was coined by the Victorian jurist William Garrow. Lord Sankey in 1935 referred to it as the ‘golden thread’ that runs through English justice (readers may recall this as being one of Rumpole of the Bailey’s favourite quotations). 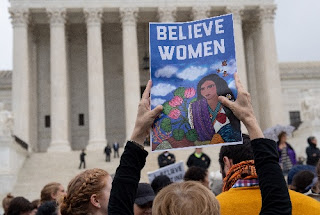 Protesters venting their spleens at the appointment of Brett Kavanaugh to the US Supreme Court despite accusations of a sexual assault at the age of 17, which he vehemently denied.  Forget about due process, let alone the presumption of innocence – she said he dunnit so he dunnit, end of story, at least as far as this lot are concerned. And they’re the ones crying ‘Shame’?

The presumption of innocence is the best guarantor of a fair trial. The prosecution must present the court with hard evidence, not hearsay or uncorroborated testimony, and certainly not pejorative sentiments concerning the accused. The defendant does not have to prove that s/he is innocent of the charge, which may be nigh impossible – how, in a mediaeval witch trial, could the defendant prove that she was not riding a broomstick as the principal witness for the prosecution claimed? Likewise, how can a man prove that he did not slide a hand up a girl’s skirt decades ago? An alibi can be useful in such instances, but is often not available, especially when the alleged incident occurred a long time ago.

I have alluded to the standards of  evidence of the witch trials in the Middle Ages because we seem to be returning to them where the charge is one of sexual misdemeanour and where the accuser is a woman and the accused is a man. ‘Believe the woman’ boils down to finding the man guilty on her say-so alone and to blazes with due process which would allow him the opportunity of mounting a robust defence, let alone the presumption of innocence. We are back to the bizarre situation where to be accused is to be guilty.

Earlier this decade, a group of senior court barristers in Sweden presented a petition to the Minister for Justice to the effect that there was a presumption of guilt hanging over men accused of sexual assault to the extent that defendants were being encouraged to plead guilty whether they had done it or not because they would probably be found guilty anyway should the matter go to trial, which would bring about a harsher sentence. It’s rather reminiscent of the heresy trials of yesteryear where the accused would, if his luck was in, be given the opportunity to exchange being burned at the stake for some grisly penance by recanting before the actual trial began.

Now of course Sweden doesn’t have the Magna Carta and doesn’t abide by the principle of having to prove a case beyond reasonable doubt. These are among the great strengths of English law – strengths being chipped away at especially where alleged sex crimes are involved. Another of these is the right to face one’s accuser and subject him/her to cross-examination. But in R v A 2001 in the UK, the right of the defence in a rape case to cross-examine the accuser came under the spotlight, the upshot being that the judge can allow or disallow such evidence; other common law jurisdictions have similar measures in place. That could be dangerous – fatal to his defence, even – for a man wrongly accused of rape in a case being presided over by an ‘activist’ judge.

What lies behind this mindset of ‘believing’ an accuser and to hell with civilised rules of evidence is the subjectivisation of knowledge and truth over the past half century. It all started innocuously enough. The notion of objectivity came under scrutiny; there can be no such thing as truly objective knowledge as there is always a moderating input by the knower. Constructivist theory has it that knowledge is constructed by an individual when s/he processes information according to that person’s idiosyncratic conceptual frames of reference. In computing terms, everyone applies different ‘software’ when analysing information and so people will exhibit different ‘takes’ upon exposure to the same information inputs. 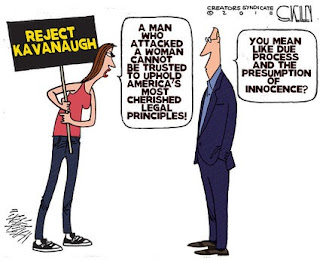 It is indeed easily demonstrated that no two people will walk away from the same scene or narrative  with precisely the same understandings once they have processed it. But the subjective component of knowledge has come to be elevated to the be-all and end-all with regard to truth itself. Truth is deemed to be entirely subjective now; you have your ‘truth’ and I have mine. Beliefs and not hard [objective] evidence have become the arbiters of truth. To use a topical example, if you are a bloke but believe yourself to be a girl, never mind about that pesky little ‘Y’ chromosome in each of your cells, you are a girl – and woe betide anyone who won’t use the feminine pronoun when referring to you.

Likewise, if a woman says you (speaking as a guy) got fresh with her or tried to get fresh with her to her displeasure – even if you were led on or even if you didn’t do anything of the sort – that is her ‘truth’. There may not be a scrap of hard evidence supporting the allegation – it may be decades after the event – but that won’t get you off the hook . After all, she is the one who has to be ‘believed’.

Now of course one could run with the logic of all truth being subjective and no ‘truth’ thereby being better than any other, there being no objective criteria to apply. So why should her ‘truth’ be accepted – why not yours? It is at this point that the new ‘truth’ paradigm reveals its insidious nature: some subjective ‘truth’ trumps other subjective ‘truth’ not because of its content but because of its source, and all sources are not equal. In this instance, female ‘truth’ beats male ‘truth’ – so much for gender equality. 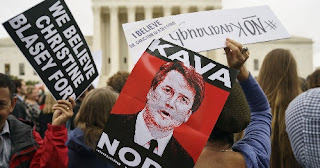 “We believe that a man should be deemed guilty solely on the basis of a woman’s unbsubstantiated say-so.”

Philosophers can discuss and debate the nature of truth until the cows come home – they have been doing so for millennia – but when a man is in the dock for a sex crime, be it in a court of law or the court of public opinion, it has to be hard evidence that determines his fate. It is not actually a matter of ‘believing’ either the accuser or the denier – it is a matter of the former having to prove her case beyond reasonable doubt. Not by turning on the waterworks, or by appealing to the fact that some real sexual offenders get away with it, or by highlighting unfashionable opinions held by the defendant.

I am proud of the legal heritage that we have in the form of the principle of the presumption of innocence. As one wit put it, better that a hundred guilty people are acquitted than one innocent person be wrongfully found guilty. Granted, that’s far from ideal, but consider the alternative: the presumption of guilt because of who or what you are. And believe me, if you’re a White, sexually normal male, the verdict is automatically ‘Guilty’ if current trends come to fruition. 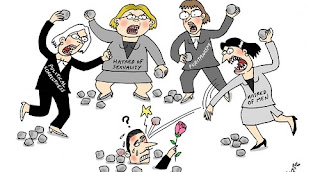 Perhaps if the penalty for making a false accusation were to be the same as the penalty for the claimed offence, we would see a more moderate approach to slinging the mud?

It is 60 years since I joined the Police and I was 6 yrs as a Police Prosecutor. How the hell does someone defend against a sexual allegation that happened 30 yrs before when no complaint was laid at the time nor was the allegation made to the alleged offender. There should be a time limit on any prosecution such as 20 yrs. If you have not seen fit to complain before that time don't expect someone to be able to defend against it fairly. Imagine if your husband's staff member of 20 yrs ago makes an allegation he sexually assaulted her. Would it be fair to proceed at this late date whereby your husband has absolutely no way of disproving it?

A precursor of the present situation was the doing away with principle, based upon centuries of experience, that in certain cases, such as accusations by children or sexual complaints by women, it is dangerous to convict without corroborative evidence.

The Kavanaugh case ushered in a new era of insanity. Feminist insanity. The woman did not remember when, or where the fictitious event took place and her witnesses denied her story. She should have been prosecuted for malicious evil.