Seems obvious to you and I, but a fact that the Left has long resisted. Their response is always to indignantly insist, "...people want to work."

Below is a graph tracking exit rates among Jobseeker-Work Ready (JS/WR) beneficiaries. The associated commentary notes that recent exit rates are lower than during the GFC!

But notice also the bold type sentence below the graph. Paying those JS beneficiaries with children MORE has reduced their exits off welfare. 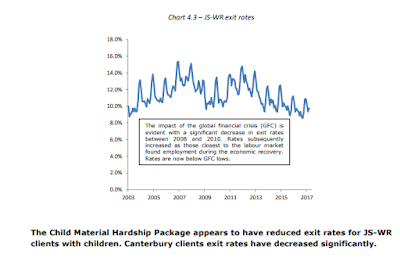 This slowing exit rate is further broken down into with or without children: 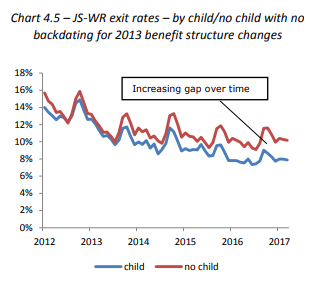 The report goes on to state:

Establishing causality is difficult, though the widening of the gap appears to correlate with the introduction of the Child Material Hardship Package (CMHP) in April 2016. Benefit rates were increased by $25 for families as part of this package.

It doesn't mention the significant increase to Family Tax Credits (including the Best Start $60 weekly baby bonus) from July 2018 but presumably the same applies.

Further into the performance report comes another gem of commonsense:


IRRS is more generous than AS and can act as a poverty trap.

This means that Income Related Rents - whereby the state house tenant only ever pays a fixed percentage of his income - is a more generous subsidy than paying part of a tenant's rent in the private sector.

The "poverty trap" describes what happens when the tenant is disincentivised to improve his income (through employment) because he will lose a substantial portion in increased rent. It's similar to the disincentive Child Support imposes. Not infrequently the two disincentives coincide.

There is a very real concern that state housing turnover has slowed up considerably due at least in part to this 'generosity' (causing lengthening waiting lists and recourse to emergency accommodation.)

This sentiment is reiterated later:

In previous reports we highlighted that the design of IRRS, AS and TAS creates financial disincentives for clients to move out of public housing and into the private market and employment.

Yet greater generosity of benefits and other assistance is synonymous with the current government which steadfastly ignores that the associated disincentives come at a devastating social cost, particular to children.

The socialist approach to alleviating poverty merely entrenches it.

In my local provincial city there are officially over 1000 unemployed / Job seekers. Last week we ran an ad for two days in the local daily newspaper advertising for a Barista and casual staff to work in our café. Apart from the Barista position where we require some experience we needed no qualifications for the casual positions for general duties. We pay above the minimum wages and consider ourselves a good employer. How many of the over 1000 officially classed jobseekers applied.. exactly zero. Apart from 3 high school students looking for summer jobs ... Zero.
Says it all really, this government is seriously deluded if they think our so called jobseekers (that's a joke in itself) really want work when its so much better to stay at home on generous government hand-outs and subsidy's.
How are we expected to run a business?

People need income to pay for food and shelter. People do not need jobs to have a satisfying life (as a pensioner on a basic income provided by the state, I know that). So it would seem that money is not the motivator some people think it is. Actually sleeping rough and starvation are the motivators which the current economy relies on. But we don't want people to starve because of the lottery of birth (parents, location, physical and intellectual capabilities). We must invent a new economy with different motivators. With AI and robots increasingly eliminating jobs, that need is becoming more urgent.