Brian Gaynor: Aussies are banking on bumper profits in NZ

They completely dominate the New Zealand commercial sector in terms of profitability and have a huge impact on the domestic economy, particularly residential property.

The four banks — ANZ Bank New Zealand, ASB Bank, Bank of New Zealand and Westpac New Zealand — reported combined statutory profits after tax of $5128 million for the latest year, a 9.2 per cent increase over the same period in 2016/17 (see table).

These figures totally dwarf the largest listed NZX companies as illustrated by the following figures:

Kiwibank, TSB Bank, Southland Building Society, Heartland Bank and The Co-operative Bank, with a combined market share of 15.1 per cent, are the only New Zealand-owned banks.

These NZ-owned banks are much smaller in terms of profitability with Kiwibank reporting net earnings after tax of $115m for the June 2018 year, TSB Bank $52m, Southland Building Society $27m, Heartland Bank $68m and The Co-operative Bank $10m.

The Big Four use their massive banking sector dominance to move into other areas, including KiwiSaver.

The four Australian parent companies of the NZ banks — ANZ, Commonwealth Bank (CBA), National Australia Bank (NAB) and Westpac — also have a dominant position across the Tasman with a combined market share of 78.0 per cent. 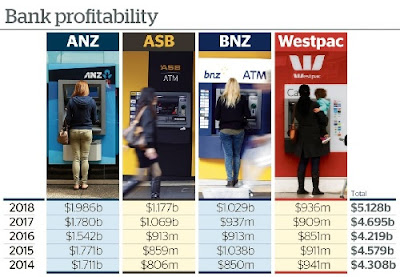 This is slightly lower than the 82.7 per cent market share of their NZ subsidiaries.

Overseas ownership of our four major banks is a huge loss to the economy in terms of the dividends remitted overseas and the finance sectors’ under representation on the NZX.

The MSCI World Index has a 16.3 per cent weighting to the financials with JPMorgan Chase and Bank of America included in the index’s top 10 companies.

By comparison Heartland, which is the only domestic-owned bank listed on the NZX, has a sharemarket value of $0.9b or just 0.6 per cent of the NZX’s total value.

The four Australia-owned banks would have a combined NZX value between $60b and $70b if they were listed on the domestic sharemarket. This would be a huge boost to the NZX as it has a current value of only $135b.

The release of the Financial Markets Authority (FMA) and Reserve Bank of New Zealand (RBNZ) inquiry into the banks was awaited with interest because of the sector’s commercial dominance and massive profitability.

The report, “Bank Conduct and Culture. Findings from an FMA and RBNZ review of conduct and culture in New Zealand retail banks”, was released earlier this week.

However, two statements in the report indicated it would take a relatively light-handed approach to the subject.

The first was: “The FMA and RBNZ are New Zealand’s two main regulators of financial markets. The FMA focuses on conduct regulation of some financial market participants, and the RBNZ focuses on maintaining a sound and efficient financial system through prudential regulation. Neither regulator has a direct legislative mandate for regulating the conduct of providers of core retail banking services (lending, credit, bank accounts.)”

When a regulator writes that it has no “direct legislative mandate” then this analysis will be light, particularly in relation to large banks because they have substantial legal resources to challenge these reviews.

The second comment was: “The review was not an audit of individual files or accounts, or a detailed investigation of historical cases like that of the Australian Royal Commission into Misconduct in the Banking, Superannuation and Financial Services Industry”.

This statement also gave a clear indication that the FMA and RBNZ was taking a much lighter approach to its bank conduct and culture assessment than the Australian Royal Commission.

However, the NZ report determined: “There are inherent conflicts of interest in the provision of financial services. This is particularly apparent in vertically or horizontally integrated firms such as banks, which both ‘manufacture’ financial products, and provide advice and sales. We have seen these conflicts play out in the design of sales incentives, and in the lack of investment in systems and processes for measuring and reporting on customer outcomes.”

The FMA/RBNZ report went on to note: “A survey earlier this year by Consumer NZ found 27 per cent of people reported receiving unsolicited product offers from their bank. Similarly, our consumer survey found 24 per cent of respondents had received an offer of a product they did not want or need. Stakeholders told us some customers have reported that they feel pressure to purchase products from their bank in these situations. This is supported by the results of our survey, where 15 per cent reported feeling pressure from bank staff to purchase products they did not want or need.”

This issue has been a major focus of the Australian Royal Commission but the FMA/RBNZ adopted a softer approach.

One of the obvious areas of conflict is KiwiSaver and the ability of the banks to use their distribution to capture huge market shares.

The four major banks and Kiwibank had a 64.2 per cent share of total KiwiSaver funds of $50.8b at the end of June.

Simplicity’s Sam Stubbs is a huge critic of the banks’ strong market position but these major banks continue to attract more and more KiwiSaver funds.

Since the end of 2017, ANZ has increased its KiwiSaver funds by $1289m, ASB by $1055m, Westpac $623m, Kiwibank $489m, BNZ $306m and Simplicity $193m. Simplicity has made good progress but it is extremely difficult to compete against the banks because of their huge financial resources and substantial distribution capabilities.

Considering these, it seems inconsistent that the Commerce Commission approved the merger between ANZ Banking Group (New Zealand) and The National Bank of New Zealand, two hugely profitable banks with strong market positions, where it rejected the merger between NZME and Stuff, two media companies struggling against fierce international competition.

The main conclusions are that the four major Australian-owned banks have a charmed life in New Zealand. This enables them to report huge profits and successfully fight off smaller competitors.

Brian Gaynor is Head of Investments at Milford Asset Management. This article first appeared in the NZ Herald.