Wind Farms Kill Off 75% Of Buzzards, Hawks And Kites That Live Nearby, Study Shows

New data from NASA’s SABER instrument on board NASA’s TIMED satellite confirms that our atmosphere is losing heat energy near the edge of space as we approach solar minimum. In fact, if current trends continue, it could soon set a Space Age record for cold. 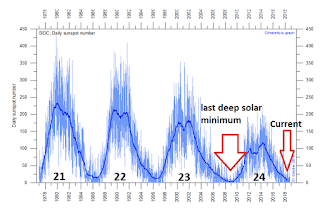 The sun is blank again today and has been without sunspots about 60% of the time this year as the current historically weak solar cycle heads towards the next solar minimum. Solar cycle 24 is currently on pace to be the weakest sunspot cycle with the fewest sunspots since cycle 14 peaked in February 1906. Solar cycle 24 continues a recent trend of weakening solar cycles which began with solar cycle 21 that peaked around 1980. The last time the sun was this blank in a given year on a percentage basis was 2009 during the last solar minimum when 71% of the time was spotless.

That last solar minimum actually reached a nadir in 2008 when an astounding 73% of the year featured a spotless sun – the most spotless days in a given year since 1913. All indications are that the fast-approaching next solar minimum may be even quieter than the last one which was the deepest in nearly a century.

One of the natural consequences of a solar minimum is for the upper part of the Earth’s atmosphere to cool down. Another natural impact of decreasing solar activity is the weakening of the ambient solar wind and its magnetic field which, in turn, allows more cosmic rays to penetrate the solar system. The intensification of cosmic rays can have important consequences on such things as the safety of airline passengers and astronauts in space, Earth’s cloud cover and climate, and possibly even on lightning. 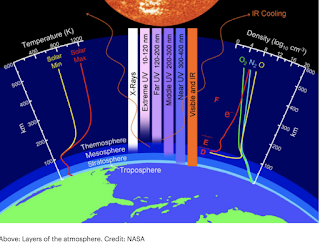 Possible record-breaking cooling in the thermosphere

One of the most important ways the solar cycle affects our planet is by cooling off the thermosphere during solar minimum. The thermosphere is the part of the earth’s atmosphere that begins at about 50 miles (80 kilometers) above the earth’s surface, extends to outer space, and is characterized by steadily increasing temperature with height. New data from NASA’s SABER instrument on board NASA’s TIMED satellite confirms the notion that our atmosphere is losing heat energy near the edge of space as we approach solar minimum.

In fact, if current trends continue, it could soon set a Space Age record for cold according to NASA. There is good news and bad news in all of this. The good news is that when the thermosphere cools, it actually shrinks, thereby reducing drag on satellites in low Earth orbit which can increase the life of a satellite.

The bad news is that this cooling aloft tends to delay the natural decay of space junk resulting in a more cluttered environment around Earth. […]

Galactic cosmic rays are high-energy particles originating from outside the solar system that can impact the Earth’s atmosphere. Our first line of defense from cosmic rays comes from the sun as its magnetic field and the solar wind combine to create a ‘shield’ that fends off cosmic rays attempting to enter the solar system. The shielding action of the sun is strongest during Solar Maximum and weakest during Solar Minimum with the weakening magnetic field and solar wind. The intensity of cosmic rays varies globally by about 15% over a solar cycle because of changes in the strength of the solar wind, which carries a weak magnetic field into the heliosphere, partially shielding Earth from low-energy galactic charged particles

Evidence of an increase in stratospheric radiation

One way to monitor cosmic ray penetration into the Earth’s upper atmosphere is to measure stratospheric radiation over an extended period of time. 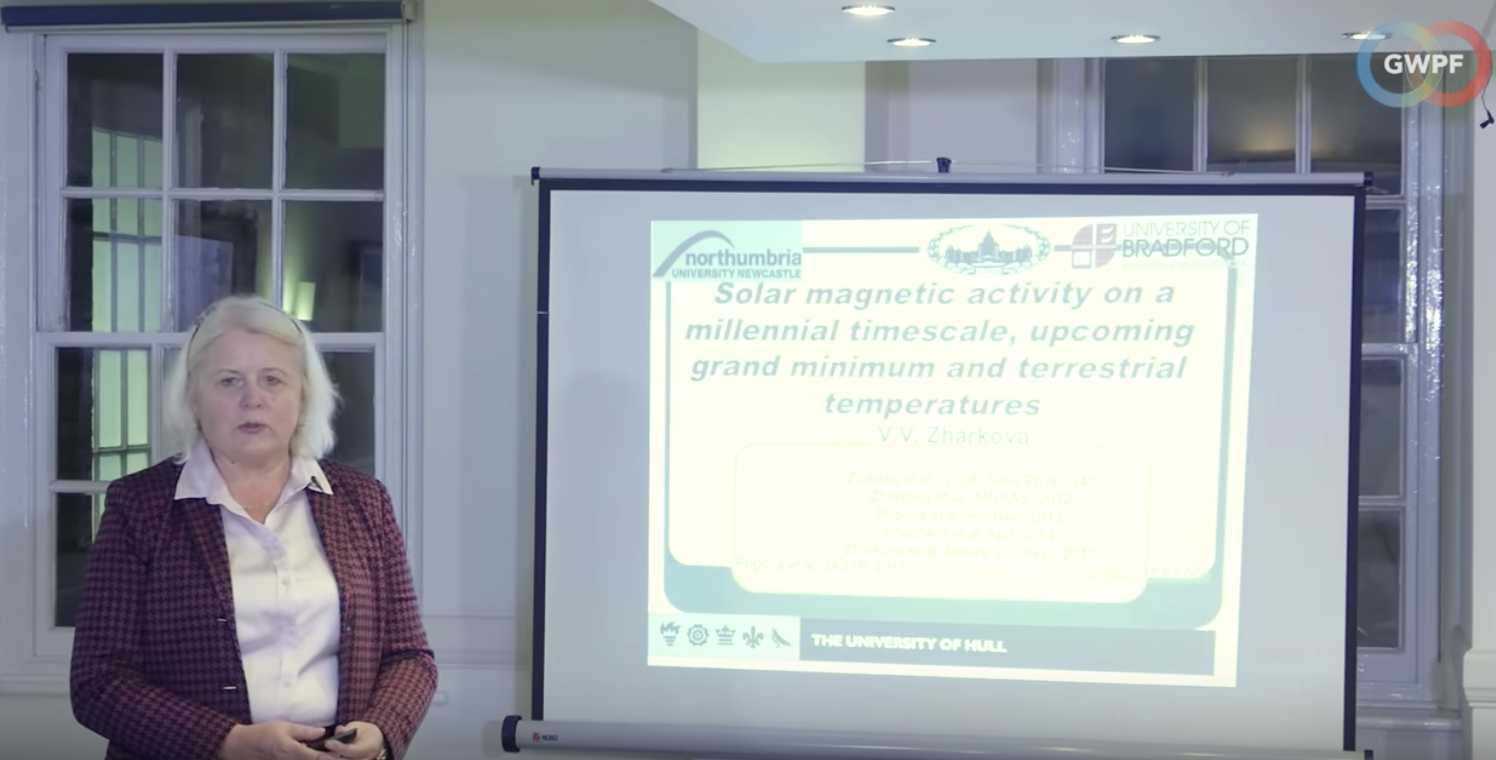 Wind turbines are the world’s new ‘apex predators’, wiping out buzzards, hawks and other carnivorous birds at the top of the food chain, say scientists.

A study of wind farms in India found that predatory bird numbers drop by three quarters in areas around the turbines.

This is having a ‘ripple effect’ across the food chain, with small mammals and reptiles adjusting their behaviour as their natural predators disappear from the skies.

Birds and bats were assumed to be most vulnerable to the rise of the landscape-blotting machines.

But their impact is reverberating across species, experts warned, upsetting nature’s delicate balance. 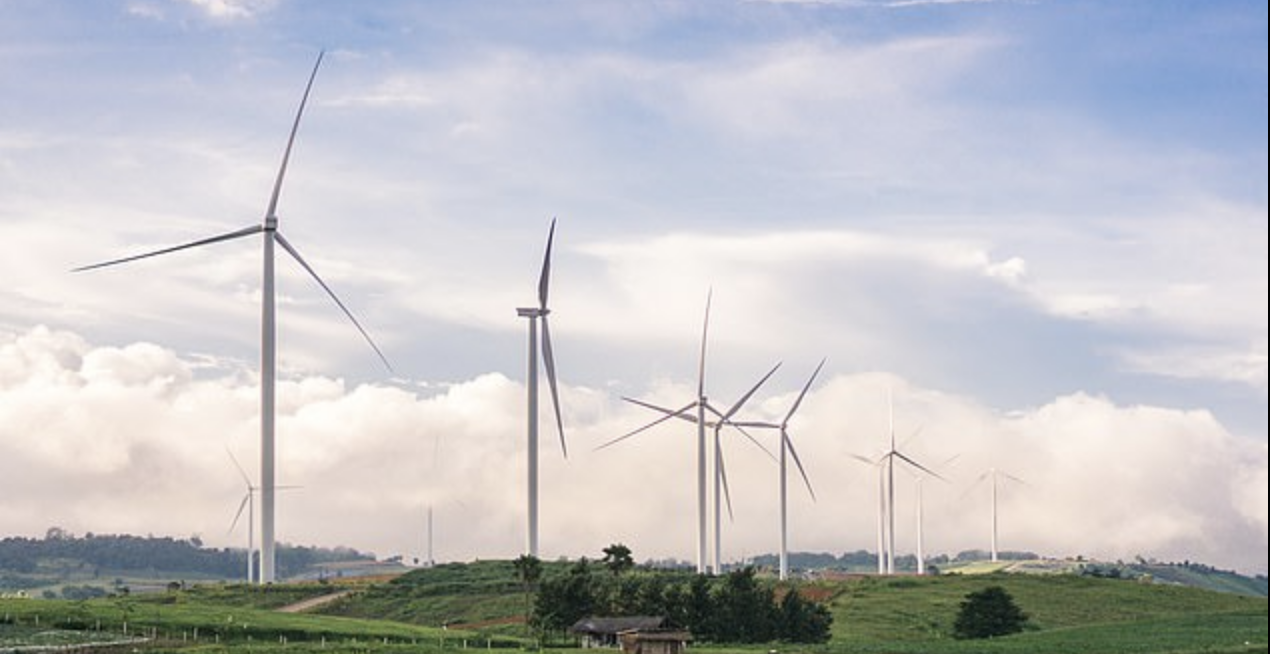 Wind turbines are the world’s new ‘apex predators’, wiping out eagles, hawks and other carnivorous birds at the top of the food chain, say scientists (stock image)

Researchers at the Indian Institute of Science in Bengaluru studied lizard and bird populations at three wind turbine sites in the Western Ghats.

They found almost four times fewer buzzards, hawks and kites in areas with wind farms – a loss of about 75 per cent.

In areas without turbines around 19 birds were spotted every three hours, while nearer to the machines this number dropped to around five.

This led to an abundance of the fan-throated lizard, a species only found on the Indian sub continent and a favourite snack of the predatory birds.

The reptile also had lower levels of the stress hormone corticosterone and this changed how it lived.

For instance, humans were able to get much closer than usual before they ran off, as without predatory birds around, they had become less fearful.

The analysis has implications for wind farms all over the globe – including Britain, where the top predators include many birds of prey such as owls and eagles.

Study coauthor Professor Maria Thaker said: ‘We have known from many studies that wind farms affect birds and bats.

‘They kill them and disrupt their movement. But we took that one step further and discovered that it affects lizards too.

‘Every time a top predator is removed or added, unexpected effects trickle through the ecosystem.

‘What is actually happening here is the wind-turbines are akin to adding a top predator to the ecosystem.’

The study published in Nature Ecology and Evolution compared populations of raptors and lizards on a plateau that has had a wind farm for around 20 years to an adjacent valley that has no turbines.

It also took blood samples from 144 lizards captured on the two locations in the northern area of the mountain range.

Wind turbines are known to kill large birds, such as golden eagles.

A recent study by an international team of scientists found the decline of apex predators is ‘arguably humankind’s most pervasive influence on the natural world.’ 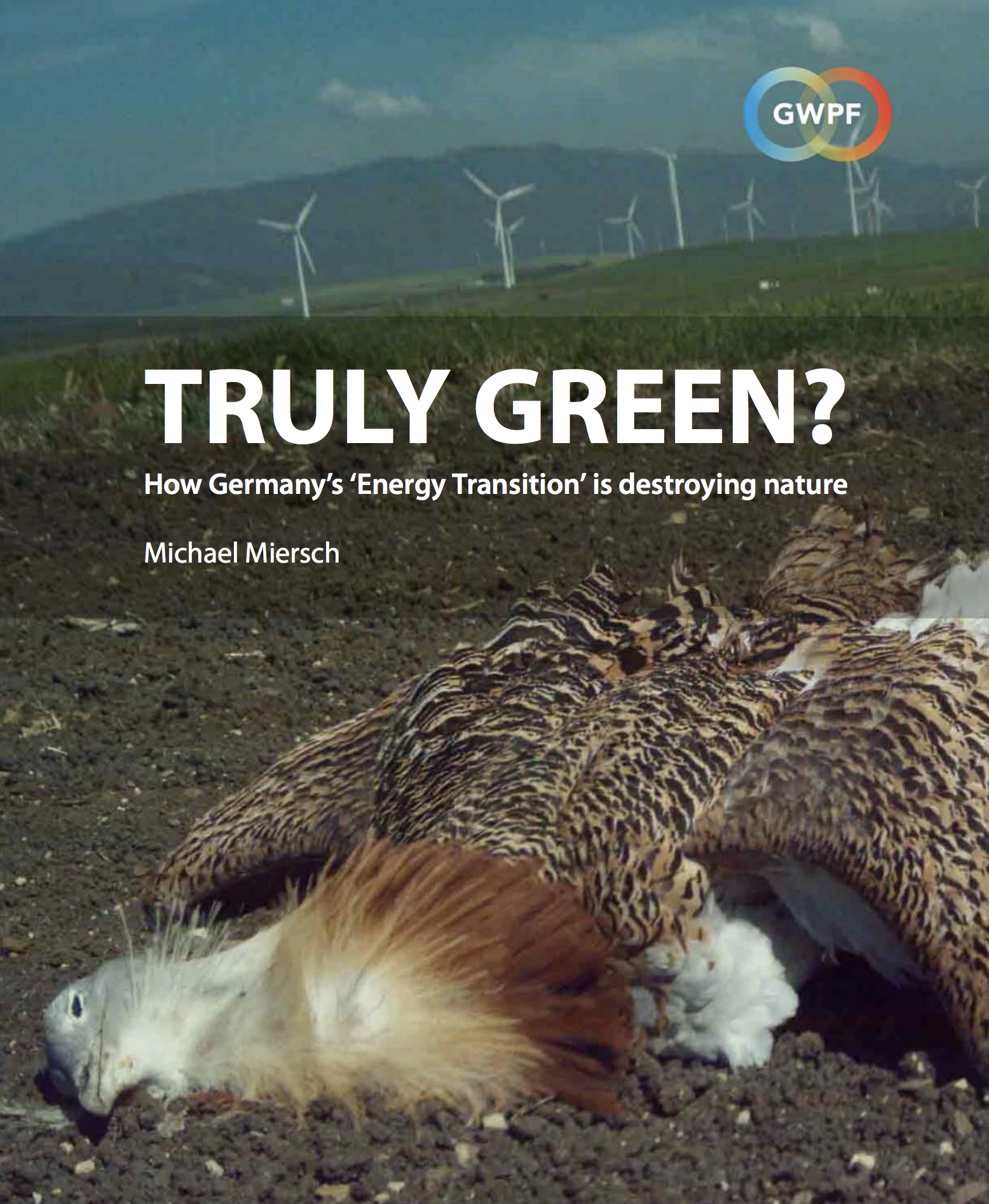 Hydropower is the source of 71% of renewable energy throughout the world. A new study says that many large-scale hydropower projects in Europe and the US have been disastrous for the environment.

Dozens of these dams are being removed every year, with many considered dangerous and uneconomic.

But the authors fear that the unsustainable nature of these projects has not been recognised in the developing world.

Thousands of new dams are now being planned for rivers in Africa and Asia.

Hydropower is the source of 71% of renewable energy throughout the world and has played a major role in the development of many countries.

But researchers say the building of dams in Europe and the US reached a peak in the 1960s and has been in decline since then, with more now being dismantled than installed. Hydropower only supplies approximately 6% of US electricity.

Dams are now being removed at a rate of more than one a week on both sides of the Atlantic.

The problem, say the authors of this new paper, is that governments were blindsided by the prospect of cheap electricity without taking into account the full environmental and social costs of these installations.

More than 90% of dams built since the 1930s were more expensive than anticipated. They have damaged river ecology, displaced millions of people and have contributed to climate change by releasing greenhouse gases from the decomposition of flooded lands and forests.

“They make a rosy picture of the benefits, which are not fulfilled and the costs are ignored and passed on to society much later,” lead author Prof Emilio Moran, from Michigan State University, told BBC News.

His report cites the example of two dams on the Madeira river in Brazil, which were finished only five years ago, and are predicted to produce only a fraction of the power expected because of climate change.
In the developing world, an estimated 3,700 dams, large and small, are now in various stages of development.

The authors say their big worry is that many of the bigger projects will do irreparable damage to the major rivers on which they are likely to be built.

Dr. Peiser gave a lecture at the Cannon Institute for Global Studies in Tokyo on October 1st and this was the basis for the Yomiuri Shimbun feature article.

Traditionally the Japanese population is virtually universal in its belief that the global warming of the past century is mostly due to man. But according to Japanese blogger Kirye: “It’s due in large part to the fact that the overwhelming mainstream media ignore climate science dissenting views, and uncritically report alarmist claims.”

Kirye, who wishes to remain anonymous, said she became skeptical of alarmist climate science in 2013 after having read books by Dr. Kiyohiko Ikeda, Shigenori Maruyama and Kiminori Itoh — rare dissenting voices in Japan.

Dr. Peiser, who received a Ph.D. from Frankfurt University in Germany, gave a lecture titled: “The Crisis of EU Climate Policy”

The Israeli born Dr. Peiser says the EU has in fact been two-faced about energy and climate policy.

The EU often claims it is ready for climate action, yet drags its feet when it comes to taking real action. “The tone has changed from consideration of environmental importance to a direction of considering a balance with the economy,” Peiser told the Yomiuri Shimbun.

He also notes that in a survey asking what is the most worrisome problem, “climate change is falling in rank” in Europe. “Problems such as immigration, economy, employment, and health are the highest now.”

In his lecture, Peiser noted the EU’s climate policies have failed to live up to the Paris Accord climate commitments to reduce CO2 emissions, have increased energy prices significantly, reduced European competitiveness, increased dependence on Russian energy and given rise to widespread public discontent.

Scaling back the subsidies

Now the energy transition to renewables is the causing Eurocrats to worry and European governments have been scaling back support for renewable energies through the introduction of a bidding system. […]

No real reductions foreseeable for Germany

He also added: “Germany will have to increase its reliance on fossil fuel power plants in order to eliminate nuclear power by 2022” and “it is impossible to substitute with unstable renewal energies that depend on the weather.”

He also believes that greenhouse gas emissions will increase over the next few years. 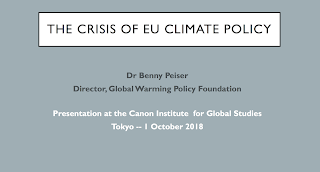 The EU’s climate policies have