Waste incinerators in which all household rubbish except recyclables and concrete can be burned are the short answer to trash disposal and panics such as that caused by China’s recent refusal to take any more recyclable plastic.

Auckland man Chris Newman, who built New Zealand’s first waste tyre processing plant, was living in Japan when he noticed that household waste there was incinerated.

Returning home, Newman submitted a proposal for a waste incinerator that also generates electricity to Cr Penny Hulse at the Auckland Council, only to have it ruled out by council staff.

He then made a presentation to the office of Associate Environment Minister Eugenie Sage and found an impenetrable government ethos of “compost and recycle”.

The problem with landfills is that despite the best-laid dump liners, the decomposing waste leaks toxic substances and generates the greenhouse gas methane.

Waste incineration removes both the need for leachate leaking landfills and the constant pressure to recycle because everything except concrete may be burned.

Emissions from these waste-to-energy plants produce particles of one micrometer in diameter, which is one tenth of the clean-air standard of 10 micrometers now required for household woodburners.

Rubbish disposal becomes very simple. All household rubbish goes into the bin, a truck takes it away, and tips it into an incinerator, and it is all gone.

A bonus is that the heat of the 1000C furnace of each 300,000-tonne-per-year consuming plant generates sufficient energy for 35,000 homes

Hitachi Zosen Innova is a waste-to-energy company with a long operating history. It has numerous plants operating in Japan, Europe, the Americas, Asia, and now Australia.

This is probably due to its business model that requires no cash investment by the council setting up an incinerator, although it does require a 20-year contract.

The key steps in the energy-from-waste process are as follows:
• Waste is transported to the plant via truck (and possibly train),
• Recyclables are removed and the residual waste is combusted in a boiler (or boilers),
• The boiler(s) produce heat generated by the combustion of waste which produces steam,
• Steam is used in generators to produce electricity to feed into the nearby city’s power grid,
• Gases from the combustion chamber are treated to high cleaning specifications, through chemical treatment and filter bags,
• Cleaned combustion gas is discharged through the stack, while being continuously monitored,
• Ash residues from the boiler and filter bags are collected and disposed to approved landfill or used commercially for road foundations.

The deal offered by Hitachi Zosen Innova, which requires no cash outlay for the plant although it does require a 20-year contract, derives income from electricity sales and disposal fees that are approximately the same as those currently levied for landfills.

Opposition to waste incinerators, according to random posts on the internet, comes from environmental justice warriors “concerned about possible impacts on low-income people and communities of colour”.

Such opponents should be aware that such incinerators have been operating in inner-city Tokyo, and Paris for decades without issues.

Other opposition has come from Green politicians wedded to the concept of composting and recycling.

Then there is the China factor. The waste industry in New Zealand is controlled by two mainland China companies whose business models are based on landfills.

They are Waste Management, owned by Beijing Capital since 2014, and Enviro (NZ), which operates as EnviroWaste. Enviro (NZ) is owned by billionaire Li Ka-shing's Cheung Kong Infrastructure Holdings.

Both companies operate with the permission and under the direct influence of the Chinese government. Any foreign power’s control of waste management in New Zealand could operate as a leash that can be pulled to show who is boss should economic imperialism come into play.

Last year when China abruptly said to the world “no more recyclable plastic imports” was arguably a tug on the leash.

Trash incinerators have been the way of the future in other parts of the world for decades. Australia is using the technology. Perhaps New Zealand should catch up.

If the coalition government wants to be transformative, as it declares it is, it could clear the way for two household waste incinerators, one in Auckland and the other in Christchurch. 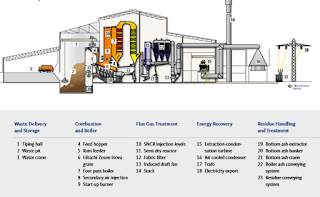 It's difficult to find fault with the the logic of Mike's view. The need for disposing of uncompostable waist is clear and the options are few. "Disposal in a W2E plant takes seconds, landfills, no matter how well managed during their usable life require aftercare of 50 or maybe 100 years. What a legacy.
Waste to energy is, as he says, far from new. The technology is well proven and operates successfully in many countries. About 20 years ago Olivine proposed such a plant at the old Meremere power station but their efforts were thwarted by the Compost or Bury brigade. Had it have been successful, China refusing to take plastic waste may well have gone unreported in New Zealand. Also, Waste to Energy plants can burn old vehicle tyres, a massive worldwide problem for which the current "Green" solution is.......?
As for the proposed new landfill in the Dome Valley, I find it incredulous that the local council would give it any consideration at all. A W2E plant in a less scenic part of Rodney or even further north would make much more sense and Transpower would be delighted to have some new generation north of Auckland.
When I worked in Power Generation in the U.K. a colleague went to work in a new W2E plant in Coventry so I can add to Mike's list of benefits,
Metal from the boiler ash was recovered and sold and waste heat from the flue gasses was sold for space heating to the car factory next door.
I"m not just sold on the idea of waste to energy, since the technology has been available there has never been any other option.

there was a very sound proposal by 4new.io with the intent of generating electricity to reduce the environmental impact of electricity generation dedicated to cryptocurrency mining. This tech has been used for microgeneration in NYC where individual buildings are fully powered from their waste inceration

I visited a waste to electricity plant in Frankfurt in a residential area. Rubbish plus sewerage burnt at 1700 degrees so no toxins. Only waste was a small amount of ash which was vitrified and used in roadmaking. The burgeoning mountain of waste alongside the Waikato at Springhill is a catastrophe waiting to happen. It is a disgrace.

Meremere would have been the perfect site for a waste generating power site. Could have utilized both Auckland & Hamilton's rubbish. But unfortunately common sense & 'Green' philosophy have nothing in common, which means the problem continues to expand, & the 'Greens' continue to protest the loudest. And what happened to the Meremere station? Last I heard, the asbestos had been removed, & the building was GIFTED to the Maori for ??? storage..

It is simply a no brainer and what a sad bunch of politicians we have had and still have not turning Meremere into one of these plants?

Mike is right,remember the old Meremere power station some people wanted to use it to burn waste and generate power some 20 years ago.I was at the presentation but the Councils did nothing.Add in refunds on glass and plastics and then our roads will be cleaned up and streets

A New Zealand Company, Olivine NZ, proposed to recycle Meremre powerstation as a Materials Recycling and Waste to Energy Plant in the 90s.

The vested interests of the waste companies aided and abetted by the lobby groups they funded put paid to that inspirational vision.

If it had happened then, we would not have our waste problems today. AND New Zealand would be a world leading provider of technology. Not an embarrassed follower.

Global Olivine carries that vision forward. Huntly offers the infrastructure and space to make it happen. Putting higher value jobs into an area in need.

What we need is politicians who have the courage to back it.

Instead, the greatest impact the Mayor of Auckland sees the city can have after declaring a climate change emergency, is electrification of buses.

This is common sense, Auckland used to have an incinerator at Victoria park which was very successful and many homes had an incinerator as well, fully support this proposal

This sounds like a winner, although where does the power come from to run these 1000 - 1700 kw incinerators?