When I have a major decision to make about my life, I cast a horoscope.

I am perfectly within my rights to do this whatever the nature of the decision, including whether to submit myself for medical treatment. Unless I can be shown to lack mental competence, I can refuse even life-saving treatment, and the medics would have to go along with it – I don’t actually have to give reasons at all.

And of course I can use the same approach to decision-making when it comes to my kids. After all, they are an extension of me. It’s my parental right, right? 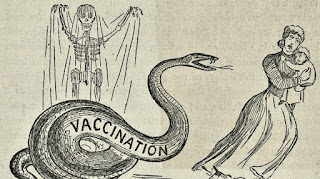 Vaccination of children against parents’ wishes has been a hot topic for a long time, as this late 19th century cartoon shows
The State owes a duty of care to its younger citizens as well as those of age. Should I be a bad parent – abusive or grossly negligent – the State can intervene. I may even have my children taken off me for their safety or wellbeing.

Western jurisdictions tend to approach State intervention between parents and their children with understandable caution. Parental rights, weak as their legal basis generally is, are recognised and allowances will be made in the case of, for instance, parents who want to home-school their kids for religious reasons.

When it comes to life-threatening situations, though, the State may intervene promptly and decisively. An important case in Australia last year was that of a 4-year-old boy who had brain stem cancer and whose parents refused to have him undergo conventional treatment. The court overruled their wishes.

The issue of parents not submitting their children for vaccination has become a hot potato in a number of Western countries. A small number have made it mandatory, although it is not clear at this stage what consequences there will be for persistent objectors.

Studies have shown that growing numbers of people in the West distrust the medical establishment. One manifestation of this uneasiness is the ‘anti-vaxxer’ movement. There is a lot of propaganda material against vaccination around, some of it quite sophisticated. But I’m not going to comment on that. If people can base major life decisions on horoscopes, surely they can do so on the basis of arguments put to them by anti-vaxxers. The issue here is not whether the decisions they make are the ‘right’ ones but whether they have the right to make them for their children. 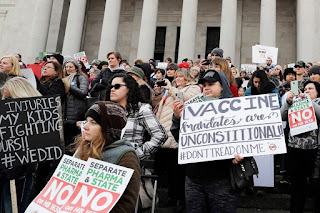 Take a kid who has had a serious accident and needs a blood transfusion, but the parents say ‘no’ because they are Jehovah’s Witnesses. Most of us would, I suspect, be inclined to override their wishes and get some urgently needed blood pumped into that youngster. But now take a child who is perfectly healthy and the parents are told that they must get the kid vaccinated, and they say ‘no’. Should we override them on this occasion?

There are two reasons that may be given in justification of State intervention. One is that the kid might get the disease(s) if not vaccinated. The other reason is that the child might become a carrier and infect other kids.

The key word here is ‘might’, With regard to the first point, I can argue that ‘might’ isn’t compelling enough and that there should be no way that the State can force  me to vaccinate my kid on the basis of a hypothetical possibility. That’s a powerful argument. With regard to the second, I would suggest vigilance and have my young one withdrawn from school the moment s/he shows any indications of possibly being infected. I realise this is not a strong argument, but is it weak enough for the State to force the issue?

The key word this time is ‘force’. If the State makes something mandatory, it must follow through. The most obvious way to do so in this context is to authorise agents of the State – the police if need be – to take a child from its parents by force and have it vaccinated. That’s probably what they do in North Korea. But is this the kind of thing we want to see in our society?

Only slightly less draconian would be to put a halt on the child from interacting with other children, such as by insisting on a vaccination certificate prior to enrolment at kindergarten or school. I doubt whether this would stand up in court if challenged. After all, the kid is not sick and shows no signs of being a danger to anyone else. ‘Might’ should not do as a justification for depriving a child of social interaction and education. 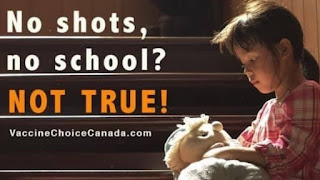 This is a difficult issue and I do not claim to have any pat answers. As with so many thorny social issues, I think we need to look for the ‘least worst’ way to deal with it rather than looking for the ‘right’ way because there isn’t one – whichever way you turn, you’ll be accused of doing the wrong thing by a lot of people, and for good reasons.

By the way, I don’t really consult a horoscope when making major decisions, although I did learn how to cast and interpret one. Astrology beats talking about the weather as a conversation topic hands down.

I agree in full with Barend.
Compulsory vaccination is in no way the healthy option. A non vaccinated kid is not able to infect a vaccinated kid? Unfortunately vaccinated kids are more prone to getting the disease than non vaccinated ones.
So! Have your own choice.
Since vaccination has been make compulsory the Autism rate has sky rocketed in the States and elsewhere
Also the miscarriage of pregnant women has gone up with about 25%.
Lets make our own decision please.

Well, Peter is simply wrong and is repeating the anti vaxx myths about Autism rates increasing form vaccination. Also vaccinated kids are NOT more prone to disease. That's what vaccines do - prevent disease. (Remember polio epidemics? I do - one of my mothers friends ended up in an iron lung. Polio is now gone from NZ - die to vaccinations.)
The way I see it, as a long term health professional, is this:-
We expect parents to provide good care for children and not deprive them of food, shelter, safety, modern medicine, and the basics of civilised society. To me vaccination is simply one of those essentials. Full Stop.

Sorry Doug, quite wrong. Polio, like all other communicable diseases went into steep decline following proved hygiene and sanitation BEFORE the introduction of vaccination

Does 'Full stop' mean giving the State the authority to override parents' wishes? That is the core issue this article addresses.